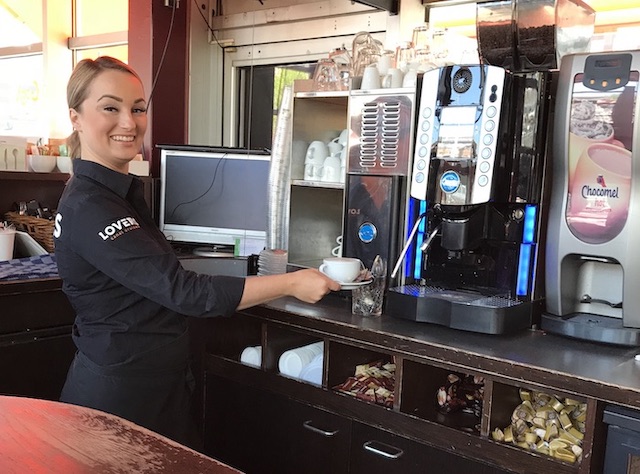 It’s a pleasure to welcome William Torphy back to the Fictional Cafe. The last story of his we published was “The Invention of Numbers” in 2016. “Invention” was subsequently chosen by the FC Baristas for inclusion in our forthcoming Anthology — but more on that another time.

Herewith William’s newest creation, “Want You Gone,” a fast-paced, witty-wise glimpse into a relationship between a daughter and her estranged father.

Cherie was pouring steamed milk over a double espresso when her father appeared at the café dressed in a form-fitting orange anorak jacket, stonewashed designer jeans and millennial sneakers. The pegs in his scalp testified to a recent hair transplant and he had obviously undergone a mid-life crisis facelift, his face tighter than a bongo, like one of those aging Las Vegas singers.

Cherie’s parents had gone through a bitter divorce battle when she was ten. Except for child support payments and obligatory holidays, her father had basically been absent from her life. He waved at her from the door and tried to act cool and friendly with her co-workers, who gave one another eye rolls. His pretense was as fake as his facelift. She cringed when he cracked a lame joke with her roommate Peg.

“Dad, why are you here? You’re disturbing our work.”

He sidled up to the counter. “Can’t I visit my daughter, who isn’t at the expensive college I paid for but has decided instead to become a barista?”

He eyed her critically. “Have you gained weight?”

Cherie forcibly plunged the steam wand into a pitcher of milk. Despite being an absentee parent, which should automatically exclude him from leveling criticism, her father had always been judgmental. Her weight, grades, choice of friends and most everything else about her were subject to his disapproval. By the time she was an adolescent, her clothes had been added to his list of especially brutal subjects of censure. And not the usual “you’re showing too much flesh” complaints by an over-protective father, but more along the lines of “that outfit makes you look fat.” He definitely would have objected to the boys she dated if he had ever been around to actually meet them.

The last time she had seen him was Thanksgiving. He had called out of the blue and asked her to join him and Second Wife for the holiday. Feeling guilty about dropping out of school and not telling him, she reluctantly agreed. Philip, Second Wife’s son, who was the same age as Cherie, saved the day from being total purgatory. They flicked rueful glances back and forth across the table as their parents chattered away, and managed to make a break for it before the pumpkin pie, which Second Wife claimed she had made from scratch but obviously hadn’t, was served.

They stood shivering on the back deck. Phillip lit a joint, took a drag and passed it to her. “Don’t you just love family holidays,” he trilled sarcastically.

“Said no one ever,” she replied.

Phillip was studying economics at Haverford but told her what he really loved to do was play the guitar. She confessed that she had dropped out of Bryn Mawr. “I’m living off the partial tuition refund. My father doesn’t know yet.”

He sighed. “I’ve gotten used to disappointing my parents.”

They watched a doe and two fawn munching on the remaining few of his mother’s annuals. Shaking from the cold, they finished the last of the joint and went back inside. Her father and Second Wife were having an intense discussion in the kitchen. “It’s probably about us,” said Phillip.

Cherie had taken the job at the café as a temporary measure. At least until she figured out what she wanted to “do with her life,” which was a strange phrase if you thought about it, as if life were some functional object, like an umbrella or a life-jacket. Megan, the café’s manager, was only twenty but wore black-rimmed glasses to look authoritative. After she started, Megan told Cherie that she had a surly attitude and wasn’t a “team player.” Cherie wondered it she should wear a football jersey and bring pom-poms to work. Many of her co-workers were in high school, kids from the Main Line whose rich parents had pressed them to work part-time after school so they could “learn something about responsibility.” They managed to hide their resentment, moving in the same easy pace as the electronic and folk rock music that filled the place.

Her father had of course chosen to visit during the busiest part of the lunch hour.  He seemed determined to grill her. “You dropped out of school. Why didn’t you tell me?”

“Can we talk about this later, Dad? We’re jammed right now.”

“Imagine my surprise when I received the notice from the Office of the Registrar.”

He raised his voice and rapped his knuckles on the counter. “You realize that I’m the one who has been paying for your schooling!”

Megan approached, adjusting her glasses on the bridge of her nose. “Is there a problem here?”

“We have a major backup. You need to pick up the pace,” Megan remonstrated, then scuttled toward the cash register, which had run out of tape.

“Did you care to order anything?” Cherie employed the clipped tone with her father that she reserved for the most difficult customers.

He squinted at the menu posted on the wall, pulling his new hairline forward. “I’d like a skinny soy macchiato latte.”

“To go?” she asked, hopefully.

“If you promise to call me later?”

She nodded, immediately making a note to forget her promise, and concentrated on her task, adding a single teaspoon of sweet vanilla syrup to a glass. Two teaspoons would make him overly hyper; then he might never leave. She brewed the espresso and steamed and foamed the soymilk, letting the liquid separate and settle to the bottom. She poured a dollop of foam over the shot of black espresso, artfully fashioning a frowny-face pattern on the top.

You’ve done it wrong!” he hissed loudly. “You’re supposed to spoon the foam over the espresso, not pour it.”

Cherie dropped the carafe with a clang and gave her father the finger. All activity ceased for a moment. Peg glanced at her sympathetically. Her co-workers gaped, smelling blood.  Megan, ever vigilant, rushed to the rescue, apologizing. “I’m so sorry, sir. We won’t charge you for the drink.”

“That’s okay,” he crooned. “I know how hard it is to get good help these days.”

Tears came to Cherie’s eyes.  Her father was just so incredibly intolerable!

Meanwhile, Megan, her face set with emphatic offense, directed her to the kitchen. “What you’ve just done is completely unacceptable! You know you can’t treat customers that way,” she warned.

Cherie wiped her tears away with the sleeve of her smock. “He isn’t a customer. He’s my father.”

“The cafe is no place for family psychodramas. Work things out at home, please.”

“My father is never at home.”

Megan’s expression softened, as if she had discovered that the employee she had been berating was an orphan or lived in a van. “Please, just pull yourself together and get back to work.”

Later that afternoon Megan handed shop keys to Peg, saying she needed to leave before closing time for a doctor’s appointment. “Do you think you and Cherie can manage to keep the café open until six?” I guess I’m not being fired after all, thought Cherie. Apparently, it was hard to get any help these days.

At closing time, Peg chased out the last customers, locked the door and amped-up the sound system. While they scrubbed the counters, cleared the tables and wiped down the espresso machine, they mimed performing the songs until they collapsed against one another giggling. Later, on the way back to their apartment in Peg’s beat-up Honda Civic, they sang along to the radio, screaming at the top of their lungs.

That night Cherie sent her father a text: NVR come to the café again. She called her mother. “He just wouldn’t leave me alone. I almost lost my job.”

“I’ll be happy to tell the wolf to leave my daughter alone,” her mother promised.

Over coffee the next morning, Peg said, “We sing really great together. Maybe we should perform someplace.”

Cherie’s only experience with singing in public was when she had tried out for chorus in high school. The music teacher decided that she was a tenor and was going to put her with all the boys, which might not have been so bad but for the fact that it was totally embarrassing being the only girl in the boy’s section.  Even so, she reluctantly agreed to practice a few songs with Peg, who recorded them. Cherie had actually never heard her own voice before. It was a couple registers lower than Peg’s and almost husky, like a Saint Bernard’s, she thought, if a dog could sing. The incongruity between them was a little weird but strangely melodious.

Cherie played a recording for Philip. “You’re really good,” he enthused. “You sing like the devil.” It wasn’t difficult convincing him to accompany them on guitar. “It’s much sexier than studying empirical economic theory,” he said.

After rehearsing together, they appeared at open mic night on the KGB Club’s makeshift stage. They performed three songs, one Cheri had composed. Peg’s soprano backed her up as she plaintively wailed: “Want you gone/ Thought I needed you here once/ Standing by my side / Want you gone now / You showed me no heart, no soul.”

The small crowd cheered her on. A guy standing near her microphone pumped his arm and shouted, “Yaaass!” She roared back at him, singing like the devil.

Philip gave her a thumbs-up. Cherie thought she caught a familiar flash of orange moving toward the exit. But it must have been her imagination, a trick of the mind, the ghost of a flame.

The next morning, wrapped in her bathrobe, her body vibrating, Cherie recalled how enthusiastically the audience had responded to their performance.

Peg handed her a mug of coffee. “We were totally lit last night. We should try to get a real gig someplace.”

“It was awesome,” agreed Cherie. “But I don’t know if I’ll have the time. I’m applying at community college.” She was investigating classes in the psychology department. She intended to apply for financial aid. She refused to be dependent on her father’s handouts any longer, controlling her like a drug.

The memory she had of him when she was four or five, snuggling with her in bed and reading stories, seemed completely disconnected from the image she held of him now.

Her cell phone rang. It was her father. She turned her phone off.

She wondered if life with a dysfunctional parent might count toward course credit in Child Development.

William Torphy’s short stories have appeared in The Fictional Café, ImageOutWrite Volumes 5 & 6, Main Street Rag, Miracle Monocle, Sun Star Review, Burningword Literary Review, and Chelsea Station, the story which was nominated for the 2018 Pushcart Prize.  He works as an art curator in the San Francisco area.