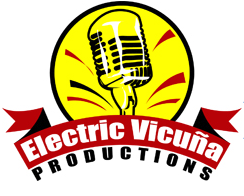 Ruby and Jack are pleased to bring you some new audio arts dramas tonight, courtesy of our friends at Electric Vicuna Productions. There are many people out there who work tirelessly, without compensation and often without praise, creating great audio content for our enjoyment. Jack J. Ward is one of those people; see his bio at the bottom of this post.

But now, please enjoy the Electric Vicuna production and re-creation of one of the most famous radio dramas ever written or aired [thanks so much, Lucille Fletcher]: “Sorry, Wrong Number.”

We’re also including the original version, which was broadcast on the CBS radio show “Suspense” on May 25, 1943 — then again, and again, due to its popularity. It starred Agnes Moorhead, and some years later was made into a film starring Barbara Stanwyck. Ms. Moorhead’s interactions with the Bell Telephone operators is a caustic portrayal of early technology.

And as if that weren’t enough for one night, we’re also featuring another of Electric Vicuna’s podcasts, “Phil Morris, Celestial Lawyer.” Jack Ward’s productions can rightfully boast of high production values, coupled with interesting content and terrific voiceover narrations.

“Phil Morris, Celestial Lawyer” is roused from his office chair by Lazarus [yes, the one and only, raised from the dead Lazarus], who bids him come to heaven to argue a case. There Morris [get the name gag?] meets God [surprise] and argues a case for a rich, blasphemous man accused of believing there is no god. Enjoy!

Jack J. Ward is an award-winning writer, director, actor, and producer of audio drama and other works. He is also a teacher of English Literature and Drama. Jack’s eclectic writing includes scripts of all kinds, adaptations, novels, short stories, and poetry. A pioneer in the new media, Jack created and co-hosts with David Ault the largest and longest-running showcase of modern Audio Drama The Sonic Society – a weekly podcast/broadcast of amazing radio plays from around the world.

Jack also is the CEO and driving force behind Electric Vicuña Productions and has been developing science fiction, fantasy, suspense, action, horror, drama, and comedy dramatic works for well a decade and a half, and now is thrilled to be producing works as well with his brothers in the Amigos Audio collective.

A passionate advocate for the environment and citizenship, Jack lives happily in Lakeside, Nova Scotia, Canada with his family.

Did you enjoy what you heard? Write us a Comment below! If we hear from enough of you Coffee Clubbers, we’ll bring you more Electric Vicuna productions!

Previous postBetter Latte Than Late, A New Story For The New Year
Previous post“Want You Gone” A Short Story by William Torphy