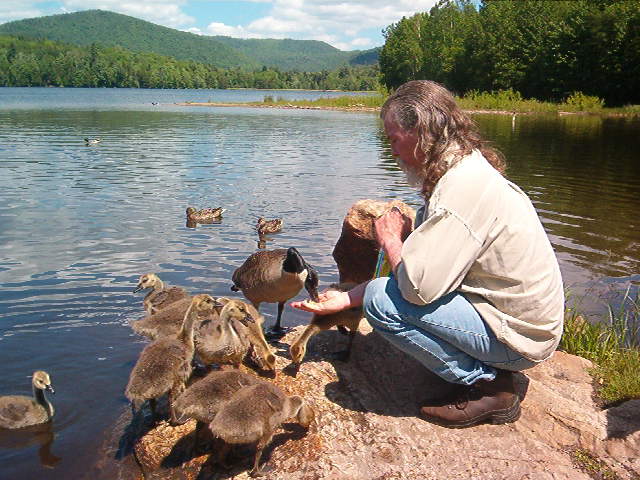 Walking Crow, one of my finest, closest friends, no longer walks among us. He now walks the paths of Summerland, far away in space and time from the cold, bleak New Hampshire winter lands.

At 2PM on December 9, 2016, Walking Crow, nee Stephen Croft, took his last breaths. Stevie, as I often called him, had been my friend – indeed, more like a brother than those bound to me by blood – for the past decade. He was dying of cancer, and I was on my way from Massachusetts to see him. His other best friend, Stormi, was at his bedside and held his hand as he took the Last Great Walk. I didn’t make it in time.

Stevie and I lived on the same dirt road in Holderness, New Hampshire, overlooking Big Squam Lake. I lived at the top of the road in a small vacation cabin. Stevie lived at the bottom in an even smaller cabin he had been told was once the shipping crate used to transport Charles Lindbergh’s “Spirit of St. Louis” airplane back to the U.S. from his solo nonstop flight across the Atlantic in 1927. The story was so fabulous there was no reason to doubt it. 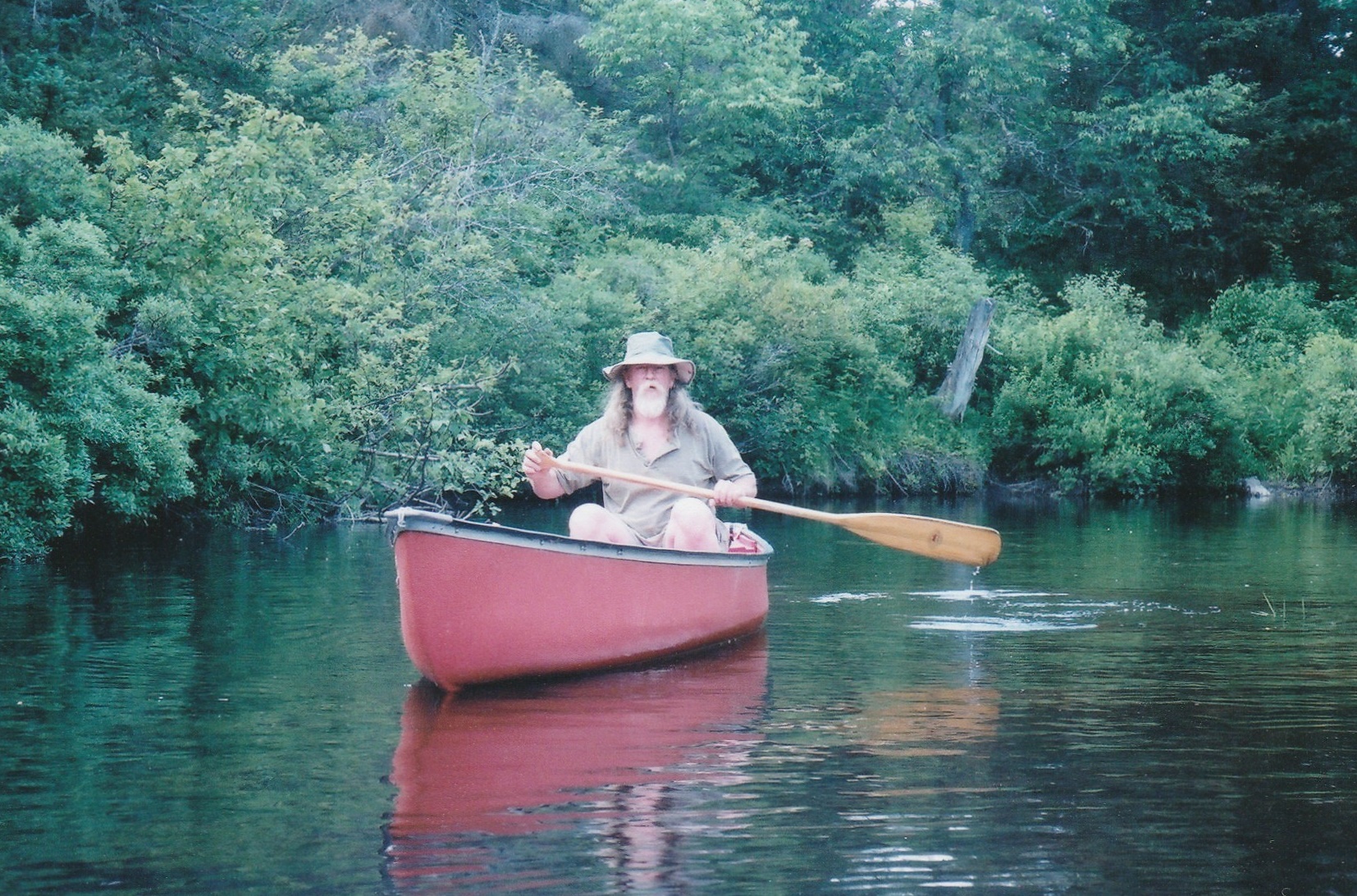 I had heard stories about this naturalist and outdoorsman for several years and wanted to meet him. I knocked at his door and we talked for half an hour. I learned we had both been in the Air Force, both in Ground Control Radar, although distanced by about ten years, he younger than I. He was articulate, funny, interesting and instantly accepted my offer to help me planting flowers around my little cabin. He was so unassuming I startled him by offering to pay him for his help. I soon learned that was his Way: he always offered himself without the need of a business transaction – money changing hands – which made me always more generous with him.

Over the years, I learned he was not only a learned man – he’d been a legal clerk – but like me he was a technology nut, always interested in learning how to do something new with a computer. Over the past four years, Stevie made many contributions to The Fictional Café. He helped unsnarl the nascent WordPress technology for publishing podcasts. He contributed suggestions for novels to podcast, then found sources for them. He became my sound engineer, mastering the recordings of my novels as we posted them a chapter a week, then later when we converted them to full-length Audible recordings for Amazon.

He liked to read, but he loved to listen to recordings of science-fiction books downloaded from Creative Commons websites. These he would dub off on a flash drive for me to listen to, and I loved it. But even more valuable was the knowledge and insights he brought to our many hours of discussion. Stevie was an astute observer of social and political life. And it always amazed me to receive website links to subjects we’d discussed the night before while we were sitting out on my deck watching a billion stars move across the night sky.

Walking Crow had another passion: labyrinths. He studied them, both ancient and modern, on the Web and eventually was able to design and build one on a neighbor’s farm. The night it was finished, he invited all his friends to a potluck dinner and candlelight labyrinth walk. It was a really fun event, replete with music played on Native American instruments, but characteristically it was nearly impossible for the group to laud him for his accomplishment.

It was Stevie’s company and conversation I appreciated the most, although like most men work and play were always intermingled. I recall one afternoon when we worked steadily for over five hours to clear a fall season’s worth of heavy, wet leaves from a drainage ditch alongside the road leading up to my cabin. It was hard work, raking the leaves and branches into massive piles over two feet high alongside the ditch, then raking the piles across the road and off the opposite embankment. We talked about life lessons, how we fit in with nature and the universe, our relationships with others. It made the work not only pass easily, but with more of a sense of its meaning and importance. There was accomplishment, both of the physical sort as well as a deepening of our friendship.

On another occasion, we were leaving my cabin and heading down the hill. “Look at that,” he said as he pointed up. I didn’t see anything, just trees and sky. I stopped and looked because I knew he’d seen something important enough to mention. “What?” I asked. “That tree.” A dead tree, bereft of bark or leaves, stood among healthy pines and birch. Its smooth, polished trunk was scarred by a foot-long gash a few inches deep, darkened by weather and age. “Woodpeckers did that,” said Walking Crow. “They found some kind of insect life to eat in there and chiseled it out with their pecking. But they killed the tree in the process.” 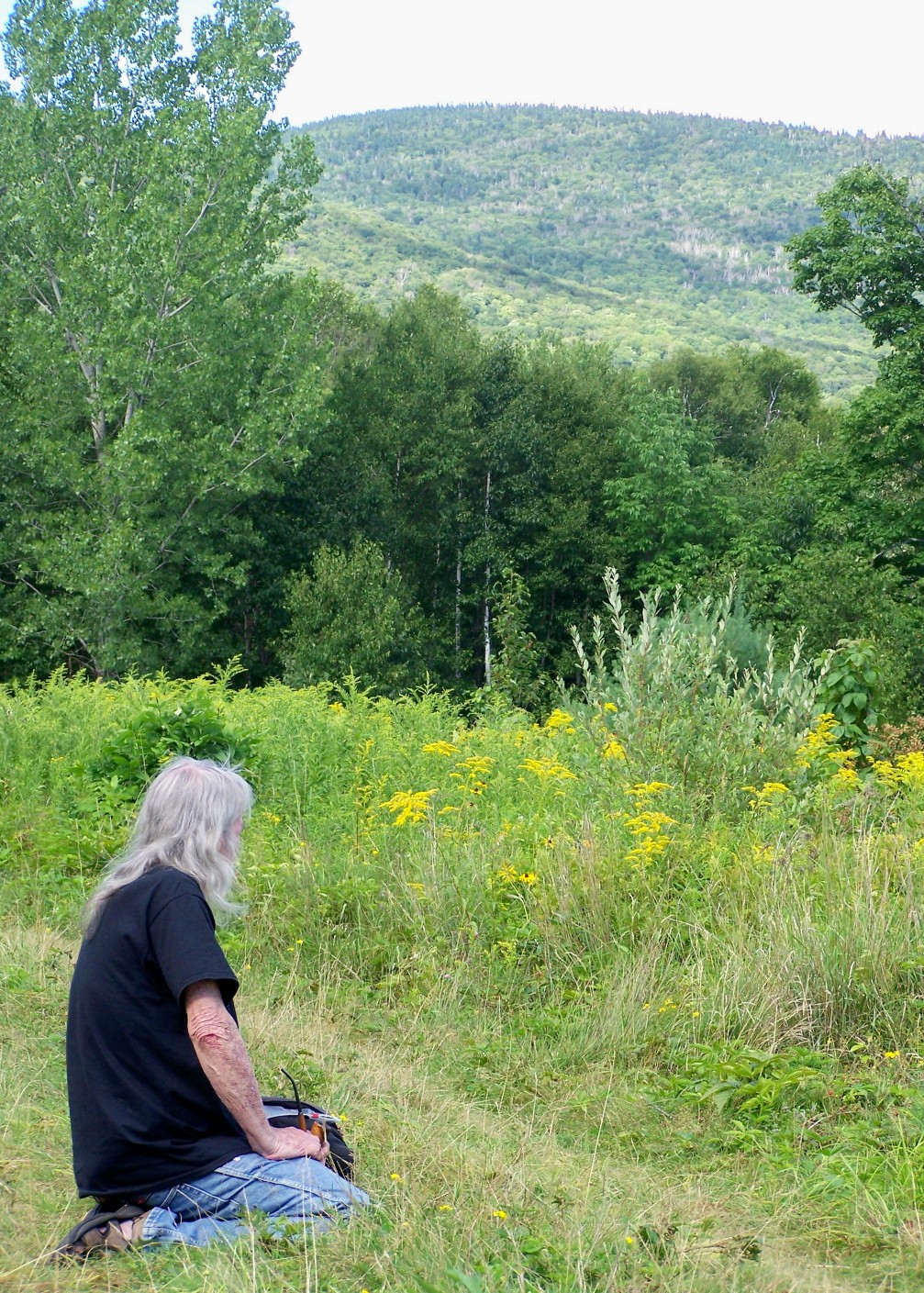 He knew so much about nature that my wife would send him pictures of birds and flora to identify, and he always did. He set out honey water for hummingbirds and never chased the bears away when they came raiding. He could spot an owl in a tree where I couldn’t see anything. He loved to hike and camp out overnight in the woods, and over time became an expert in identifying edible mushrooms, which he often gave me for my wife to cook with. I encouraged him to sell them to a local restaurant, which he did a few times, but for Walking Crow whether he sold them or gave them away was all the same to him. He also made thumb pianos from gourds and flutes, which he could have sold but more often than not gave away. 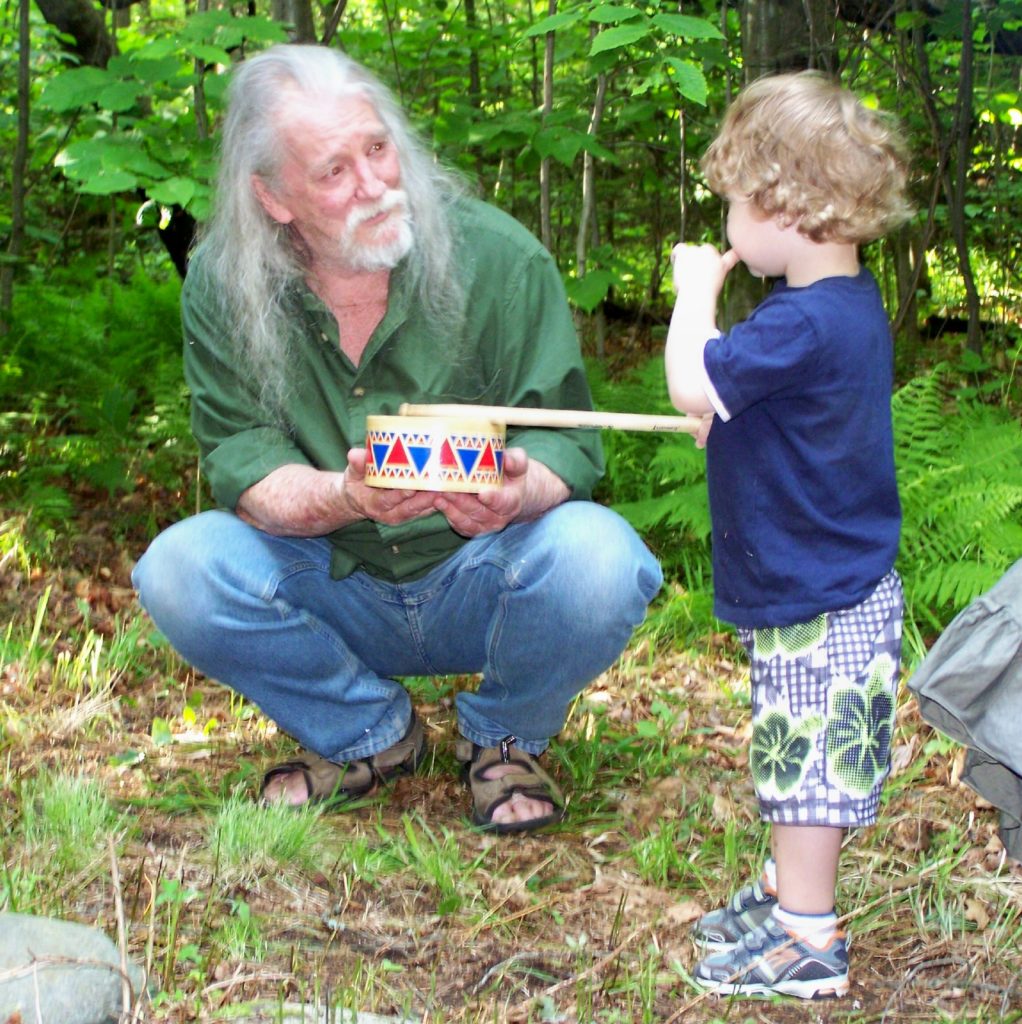 One day last fall he was out searching the woods for mushrooms when he stumbled over a tree root and fell down. For days he felt internal pain until Stormi took him to the doctor. The medical exam which followed found cancer growing all over inside of him. The doctor was willing to treat him with the hormonal and naturopathic methods which Walking Crow requested, but the doc didn’t hold out much hope in any case. Stevie eventually was so ill with the cancer that to administer chemotherapy would have killed him on the spot. Nevertheless, he didn’t survive much longer.

As I stood looking at his placid, lifeless face, I was engulfed in memories of all the good times we’d had. I thought about how Stevie never, ever judged another man, nor did he ever complain. He never groused about the cards life had dealt him, and in my opinion he’d gotten some pretty lousy cards. Yet kindness and generosity and gratitude always flowed from him. He had the cosmic benevolence of a Buddha, which he kept deep inside and was only recognizable when one’s heart was wide open and receptive. I bent over, brushed my hand through his hair, and kissed my dear friend on the forehead. In moments like this, it feels right to think a dear departed human is transformed by a power greater than ourselves into another life. The one we all wonder about and will never know anything about until it’s our turn.

I left and drove back to Stevie’s cabin. It was dark already; the temperature had dropped with the end of day and tiny snowflakes had started to fall. I sat in my car, my headlights shining on his place, thinking about all the good times we’d shared. 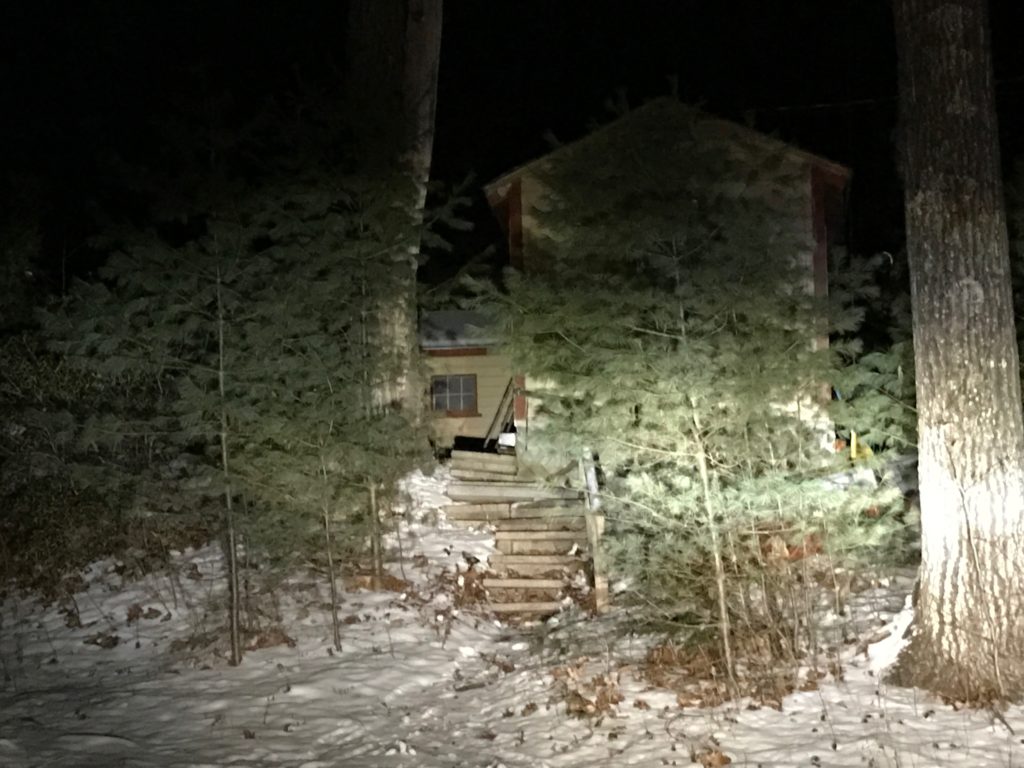 Stormi gave me Steve’s gourd rattle. I’m happy Walking Crow, Stephen Croft, is on the other side of pain, but whenever I think of him, I’ll rattle his gourd to send him a sign. 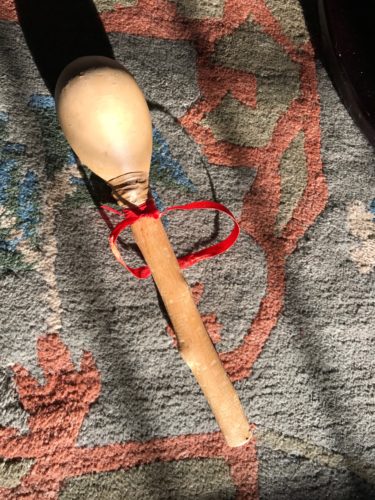