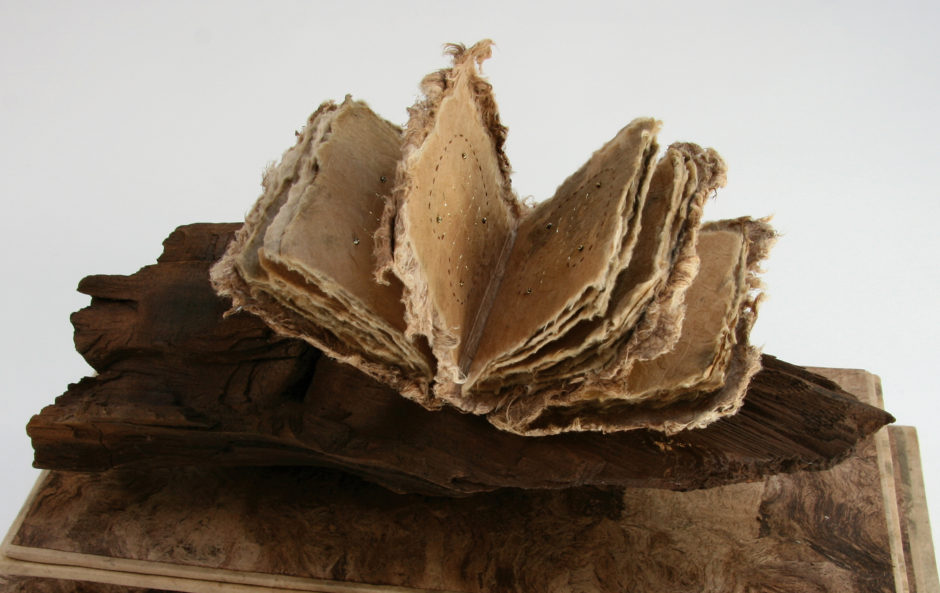 Editor’s Note: Susan Kapuscinski Gaylord creates handmade books out of morsels of matter from the world around her. She says: “The Spirit Books bring together my love of the book and my response to the natural world that we see and to the invisible one that lies behind it. I find evidence of that deeper world not in wide vistas and scenes but in small objects that I gather. While I enjoy the expanse of the horizon as I walk along the beach, I am drawn to the scattered piles of shells and driftwood I see on the sand. As I walk down the street on a glorious fall day, I find myself looking down at the fallen stems of the chestnut rather than up at the blazing orange maples. It is in the subtle shifts of browns and grays that I find beauty and resonance.

I feel a deep connection to older powers as I gather twigs, branches, vines, and roots. Using them to cradle books, I link them to the longstanding tradition of books as testaments of faith and belief. Each page is a meditation that echoes nature with both repetition and variety. “Reading” the book is meant to be a contemplative experience that takes the reader out of the everyday world and into a state of gratitude and reverence.”

About the Spirit Books

The Spirit Books, handmade books of textured papers with twigs, beads, stitched spirals, and pin-pricked designs that rest in cradles of branches and roots, are the anchor of my work as an artist. I made the first one in 1992 but the seeds of the work were sown four years earlier after a massive pruning around our house which yielded huge piles of lilac, grape vines, roses, and honeysuckle. Some of the pieces were interesting and sculptural but most were just sticks and vines. As I cut them to make them more manageable for disposal, I felt that they were filled with life and brought as many as I could into the studio.

In the intervening years, I experimented with the twigs and branches—binding them into bundles and placing them in boxes. While they enabled me to express my reverence for the natural world, they weren’t works of art. And then, one fall day, I made a book of natural papers and gold thread and rested it in a cradle of grape vines. Although I had been working with book arts for several years, I never thought to connect the two. Artists, scientists, everyone, has these “aha!” experiences. An idea or a problem has been percolating for a long time. Seemingly out of nowhere comes that mysterious, mystical moment when something outside, or deep within, ourselves, takes over and something new is created.

The Spirit Books have carried that magic with them through all the years. I work intuitively with no starting plan. I begin with my response to the natural materials that I gather in the garden, along the street, in woods and parks, at the beach, and on my travels or are given to me as gifts.I use handmade papers from around the world to make the books which rest in the natural cradles. Making the Spirit Books has been in many ways about letting go—of words, of imagery, of control—and giving voice to the materials. I view them as both books and sculptures. As books, I am concerned with the experience of turning the pages. As sculptures, I try to create objects where all the elements work together to create a harmonious whole.

The last step in making a Spirit Book is the naming. It is then that I feel the book is complete. For me, it is the marking point between the Spirit Book as a part of me and its life as an independent entity. I look at the elements on both the cradle and the book. I note the shapes formed by the stitching, the materials used in the cradles and the books, and the locations where they were found. Looking in the dictionary, in several books I have on symbolism, and online, I gather meanings and play with words until I arrive at a name. 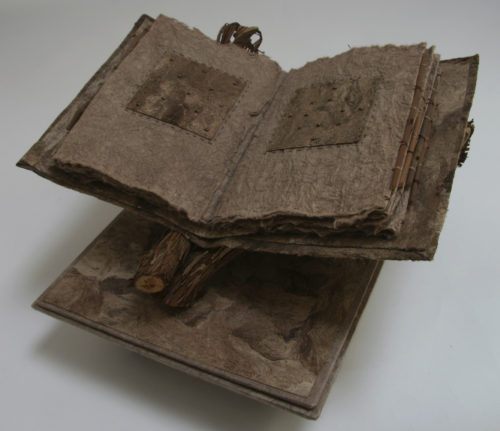 Spirit Book #11 used grape vines from that first garden pruning. I used thick vines with rough bark for the cradle and peeled thin vines to sew on the edges of the pages. I was reading a lot about Asian religious traditions and symbolism at the time and added beads and cross stitches to squares of Mexican bark paper in a pattern based on the ho-t’u, a Chinese talisman representing stability and order and connection to the earth.
Spirit Book #13: Hope Offering
1998 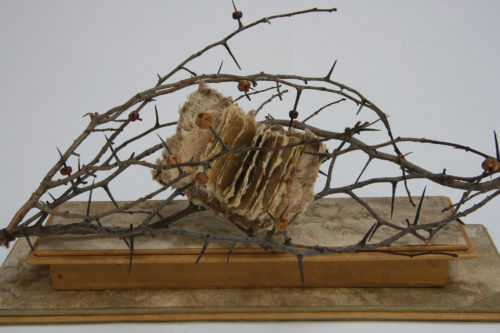 The hawthorn used for the cradle is a symbol of hope. It is embellished with beads and seed pods from rue which is the symbol of all good things at weddings in Lithuania. The embellishments remind me of the bits of cloth that women in the British Isles hang on branches near sacred wells, a custom that was originally an offering to the goddess. 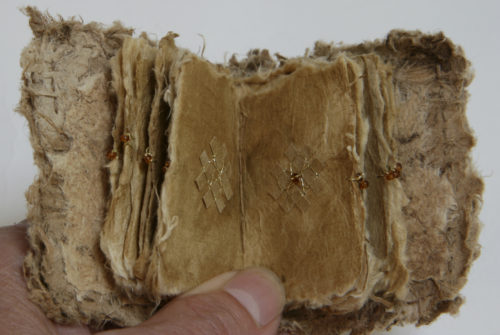 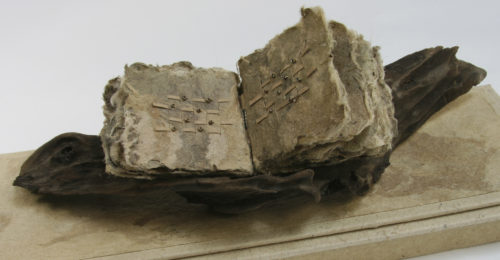 I brought this piece of driftwood from my father’s home after he passed away. I’m not sure which parent gathered it. While it is a physical part of my inheritance, it represents so much more.
Spirit Book #30: Ixchel’s Dream
2002 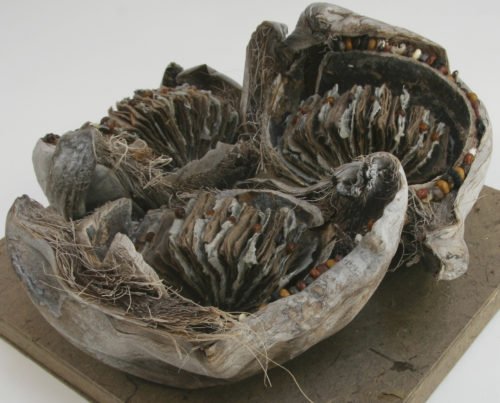 I found the coconut shells along a rocky rise above a beach on Isla Mujeres in Mexico. At the end of the island were the ruins of the temple of Ixchel who was the Mayan moon goddess. This is the only Spirit Book I named before I made it. When I picked up the coconut shells, I knew they would be the cradle for a Spirit Book which would be named Ixchel’s Dream came.
Spirit Book #44: Seeded Passages
2004 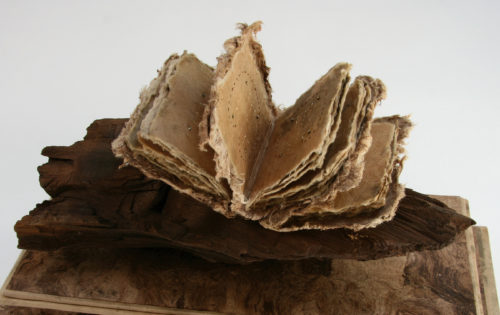 This book carries memories from a trip to California. The stand is a piece of redwood and the design on the pages was inspired by my visits to the labyrinth at Grace Cathedral in San Francisco. The repeating pattern on the pages is based on the seeds, or starting points, of the classical labyrinth. 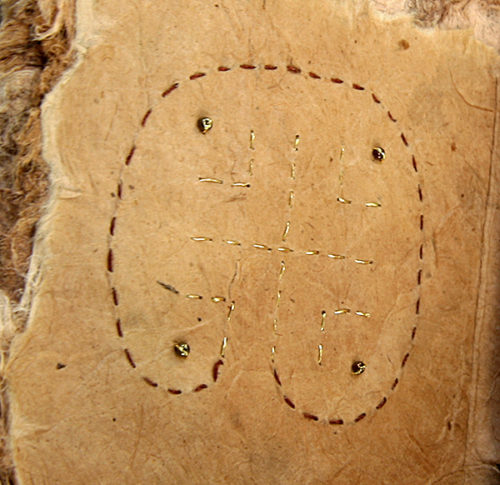 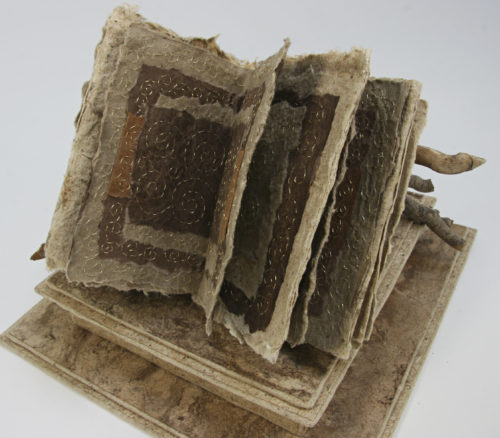 I love sewing spirals. I have to stop myself from filling the pages of every Spirit Book with them. In the Egyptian system of hieroglyphs, the spiral connotes the relationship between unity and multiplicity. As it moves, it cycles between the two in a kind of reciprocal destiny.
Spirit Book # 54: Awakened Guidance
2012 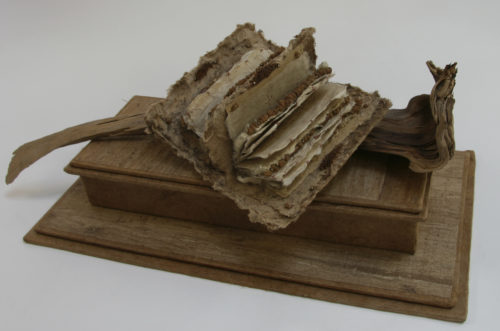 The beads on the edge of the pages are made of myrhh, the Biblical gift of the Wise Men. Guidance refers to the star that the Wise Men followed. The book was awakened from its rest as an unused part of an earlier book. 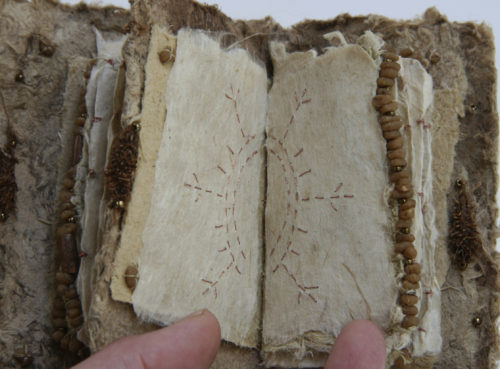 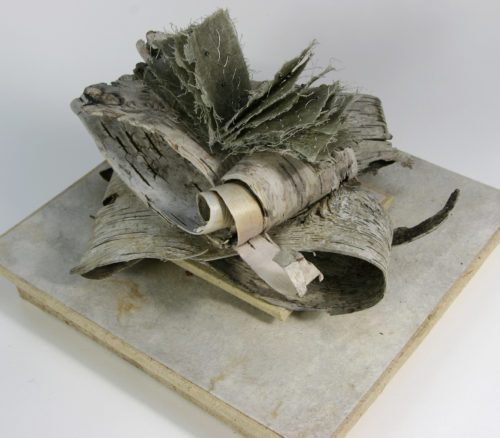 The cradle is made of two birch bark pieces that I gathered on the beach. They sat in my studio for years before I combined them. The form of the birch bark pieces suggested flight to me. The birch represents fertility and light and offers protection and shelter. 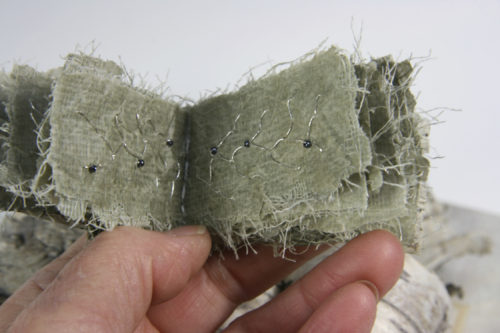 Susan Kapuscinski Gaylord is an artist who lives with her husband in Newburyport, MA where they raised two children who are her friends and mentors. She likes to think that she appears to be a normal human being who reads, cooks, gardens, goes for walks, and spends time with friends despite being engaged in an almost constant inner dialogue with her work. Whether that is true is for others to decide.

The Spirit Books catalog can be purchased through her website or at the Jabberwocky Bookshop in Newburyport, Massachusetts.

The Spirit Books will be in two exhibitions this summer—at the View Gallery in Old Forge, NY in an exhibition entitled Branches, Brambles, and Roots: an exhibition celebrating trees from June 25 to July 31 and in Firmly Rooted 2016, an exhibit addressing our ongoing, symbiotic relationship with plants at the Rezny Gallery in Lexington, KY from July 12 to August 20.

Susan has also started a YouTube channel that teaches people how to make homemade books, called The Joy of Making Books: Simple DIY Books to Make and Share. The first video can be seen here.