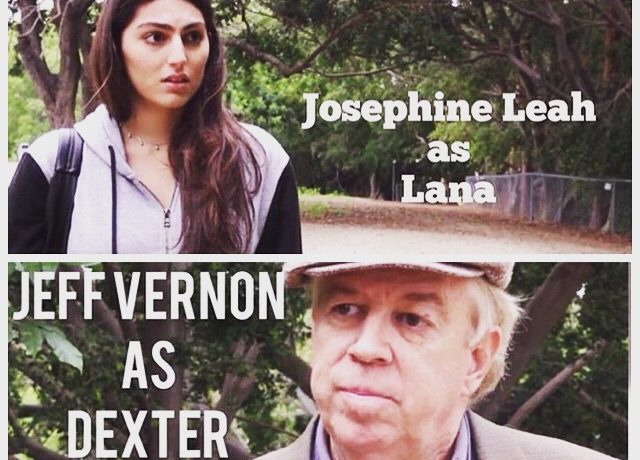 Editor’s Note: Natalie explains the genesis of her short film:

In one of my past college classes, my professor gave the statistics for the ongoing rates for anxiety, depression, and suicide amongst young adults. The concept of two strangers having more in common than they believe comes from my own struggle with anxiety and acute depression. It can be a lonely feeling and, sometimes, we convince ourselves that nobody seems to understand us, which was why I kept thinking about two survivors coming together for a story.

The Scars of Our Lives is a story about two strangers, who realize that they share a similar past when one of them sees a scar on the other’s wrist. The story had originally started out as a short film, which is now online, as well as active in the film festival circuit. The film stars Josephine Leah and Jeff Vernon.

I want to say that bringing The Scars of Our Lives to life was pure luck, but again I am someone who truly believes in fate. Originally, I had shopped around an early draft of the script, in hopes to attach a director. It was not until a colleague of mine sat me down and said, “Direct it yourself.”

Uh, what? I am no director though…

I have always been someone who enjoys working on film and TV sets; but at the time, I was stuck in procrastination mode and hesitated to jump on board as director, even though my colleague reminded me that I had directed projects before—

But that was high school and college…

Fear got the best of me. I was terrified due to my “less directing experience,” convincing myself that I was not capable of directing actors. However, around that time, a former college classmate of mine, Charmaine Camu, had reached out to me in regards to collaborating on a project together. I showed her a copy of The Scars of Our Lives, and she got back to me immediately, asking, “When do we start?”

At that moment, I knew I had to direct. Charmaine was locked in as the film’s cinematographer and editor and, together, we learned the obstacles of making a film.

Actor Jeff Vernon and I were classmates at Studio 4 (in L.A.) and we had always talked here and there, especially running into each other at events. For months, my instincts kept telling me that Jeff was the actor for the leading male role, Dexter. After reaching out to him and pitching the story, he had asked for the script. He accepted the role a few hours later.

A few weeks after casting Jeff, I was invited to a networking event where I met a new actress and singer. Josephine Leah and I hit it off and we discussed our previous and upcoming projects. I knew that she was Lana. I sent her the script, and she was immediately locked in.

The first table read and rehearsal with Josephine and Jeff was a great way to see if we were all on the same page. Fortunately, we were. I simply went with my instincts in giving them direction for their performances, but I had also trusted them as performers (something that directors should rely heavily on—trust your actors). We went straight into production the following week.

I’m not going to lie, I was terrified on shoot day. Thankfully, Charmaine’s first cut of the film had reminded me what a rewarding experience it was to follow through with a passion. I cried after the first viewing of the film because it was both overwhelming and a beautiful moment. I felt like a proud parent watching Josephine’s and Jeff’s performances, Charmaine’s beautiful shots and editing and Betina’s spot on makeup/SFX effects. Until this day, I continue to look back on this project and realize how fortunate I was for the support and encouragement from my filmmaking team.

Natalie Rodriguez is a writer and filmmaker from Southern, CA. Growing up, she had a passion for writing and filmmaking after watching “American Beauty” and “Ordinary People” for the first time, as well as reading (her long distant cousin) Robert Rodriguez’s “Rebel Without a Crew.” In 2014, she earned her B.A. in Radio-TV-Film from California State University, Fullerton. Some of her work can be found on Zooey Deschanel’s HelloGiggles; James Franco’s master class, “Sex Scenes,” web series; Short Kid Stories; Thought Catalog; Defeat the Stigma Project; Winamop Poetry and FlockU. You can find more of her work on her site and her IMDb page.