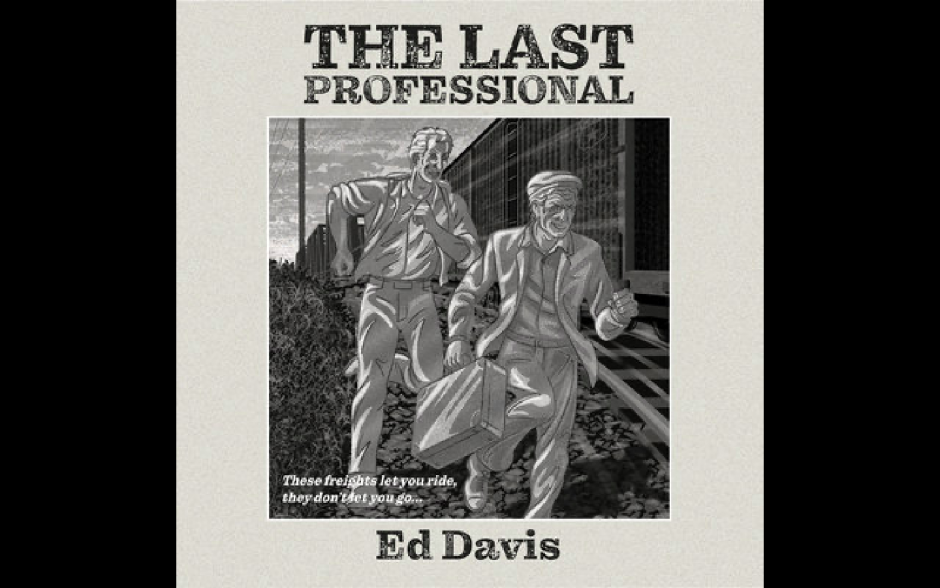 A story of the River of Steel

So pay attention now my children
And the old story I will tell
About the jungles and the freight trains
And a breed of men who fell.
–Virginia Slim

A four-lane highway passed over the Sparks yard at its eastern limit. The highway bridge had pedestrian spirals at each end and a jump-proof fence all across both sides. From mid-span, looking west, Lynden and The Duke could see the entire layout—freight cars hulking in the darkness, car-knocker’s lanterns bobbing like fireflies as they checked the couplings. A switch crew was making up a train at the west end, and on the main line a string of power units waited, ready to roll.

“That’ll be our ride.” The Duke pointed at the engine marker lights. “Chances are she’s the same one we drug in on.”

“How long till it leaves?”

“Could be anytime. That engineer will hit the horn, then goose the throttle. After that, it’s up to us.”

“He’s out there. And we won’t see him until he wants us to. But once we’re on that train, we’re gone. I ain’t seen ‘em stop a freight to catch a hobo in better than thirty years.”

The Duke wasn’t listening. His ears were tuned toward the yard, toward a sound he could hear that Lynden didn’t. Then a change in the monotonous droning of the engines, a shift in pitch more than volume. He saw that Lynden could hear it too.

The lead engine’s tracer light flashed on, its swinging beam splashing against the overpass. An unseen hand moved on the throttle. As one machine, three giant power units revved their huge engines.

Triple columns of hot smoke and spark shot up into space.

The diesel horn cried out, then again and again.

A low, vibrating groan. The engines lugged, caught, and the train began to roll.

“That’s us. Just watch me. Stay close, and we’ll grab this sucker by the tail.”

The kid made ready to run.

“Easy,” The Duke cautioned. “There’s nothin’ to ride on the head end anyway, and no sense tippin’ the engine crew we’re around.”

They walked off the bridge and ducked under it, watching as the power units rumbled by.

“When do we go?” The freight was picking up speed, and already moving faster than at Roseville.

Seconds ticked past. The cars began rocking gently back and forth, each faster than the last. Lynden watched them anxiously, watched The Duke.

“There’s our car.” A gondola was coming up fast. “Make for the front ladder on that gon and run like hell!”

They raced forward, Lynden and The Duke side by side.

A wide concrete bridge support separated them from the tracks. The kid dodged quickly around it and out to the cars.

Behind him, The Duke stopped. Some crude writing on the support caught his eye, some chalk scribbling on the face of the concrete slab.

He was almost past when the letters had connected in his mind, connected to form words, a name.

Beneath the name was a date, two days old, and under it an arrow. Short Arm was eastbound. How was that for hobo luck? The man The Duke had been running from for the last two weeks, the man who meant to kill him if he caught him—his old partner—had slipped by and was now waiting somewhere out across the desert. The Duke had seen it play out like this before. Sure, it was a wide country, but the rails were narrow and connected—a steel ribbon that always wound back on itself. No matter how hard you ran, if you stayed on those rails long enough, your past would catch you.

He hadn’t seen Short Arm in more years than he could remember, was sure he was dead. Then two weeks ago in that jungle outside the Colton yard, there he was—still alive, but changed. Short Arm had been glad to see him. That was a surprise, considering the way they’d parted. And his old friend was eager to demonstrate a new talent—something he was sure The Duke would appreciate. That demonstration ended with one man murdered, and The Duke running for his life.

The old hobo couldn’t move. Two days earlier and Short Arm would have caught him right there—would have stepped out from behind that pillar and ended it. Somewhere ahead he was waiting. In the dark, in the shadows, waiting. The Duke’s skin was pimpled with cold. He could head back west again, maybe south to Mexico. Anywhere but right on Short Arm’s heels and he’d be safe, at least for a while.

He turned to leave.

Lynden reached the train, looked around, but the old man was gone. He glanced frantically both ways on the tracks.

The Duke was nowhere in sight.

What he did see was a pair of headlights bouncing violently as they sped straight at him out of the yard.

The gondola rolled by. He could still catch something, maybe, or search for The Duke, or face the bull and his gun.

The Duke burst out from behind the pillar, saw the headlights coming, the train going, and Lynden caught motionless in between. “Go for the flat!” he yelled, then yelled again to be heard over the freight noise. He saw Lynden turn toward him, looking confused. “That flat right there!” He pointed to a flatcar just a few lengths up and coming fast.

Lynden saw it, faced it, and broke into a run.

Twenty cars back the caboose was clearly in sight, the bull’s headlights seconds behind it.

Both men hit the flatcar’s front ladder at the same time.

The Duke faded back, going for the rear ladder. Rapidly the car slid by him. He wasn’t going full speed yet, but he knew what full speed was, and knew he’d need all of it.

The car was halfway past when he quickened his pace. The lumber flat had headboards at both ends and the rear board was almost on him. Between strides he tossed his bag up, then the bleach jug, and saw them roll to a stop at the back of the car.

With his hands free he hit full speed, his body balanced and natural. Fifty years of chasing trains had taught him how to run. Arms reaching, legs stretching, hands clawing the air, running flat out.

The train was going too fast.

He saw his gear sliding by. The ladder was just above his shoulder. His only chance.

Surging forward he reached out and grabbed.

The shock was so stiff it popped all his knuckles.

The tips of four fingers were all that gripped. He reached with the other hand, found something to grasp, and instinct took over. His legs still ran, his feet still hit the ground, but with each step his strides grew longer and longer till he was leaping, yards at a time. Then a spring and a pull.

The Duke was on.

He had the ladder with both hands, but his feet were moving so fast he couldn’t push them off the ground.

Out the corner of his eye he’d seen The Duke hoist himself onto the train. He tried it, stumbled, caught himself.

He had to get on, let go, or run until his legs gave out.

The train was flying. He concentrated. Took an extra-long step.

As he pulled up, the searchlight hit him.

The bull was abreast of their flatcar, hacking the blackness with the blinding beam. It hit Lynden like a blow, shocking him at the instant he jumped.

The coarse gravel roadbed seemed to shift beneath him, pulling his feet away.

For a second, he hung in mid-air.

Then, instead of running, he was being dragged.

At the bottom rung he hung on, his body suspended inches above the scouring gravel. Feet skittering across the rocks and ties, screaming muscles stretched tight. The hungry jaws of the flatcar’s huge wheels were pulling him in. A whisper away.

The bull’s spotlight carved jaggedly through the rushing dark.

“Pull yourself up!” The old man was leaning out over the ladder, the bull’s light slashing across him. “Use your arms! Forget about your feet!”

Lynden’s arms wouldn’t move. He hung there, his backpack swinging from his shoulders like an anchor.

It was the only way.

He released the ladder with one hand and his body dropped down even lower. The pack jerked violently. He twisted, shucking off a strap. He switched hands to free the other arm. The pack caught the ground, and shoved him head first toward the pounding wheels.

He closed his eyes.

The backpack bounced free, flew up, then was sucked under the train and was gone.

Both hands on the ladder again, Lynden began to climb.

The Duke reached down, grabbed his shirt, and pulled him onto the car.

The last the bull saw of them, Lynden and The Duke were hugging, screaming, and beating each other’s backs as they disappeared into the Nevada darkness.

Ed Davis began his writing career over forty years ago, pausing in boxcars, under street lamps, and in hobo jungles to capture the beats and rhythms of the road as he caught freight trains and vagabonded around the Pacific Northwest and Canada. The Last Professional began in a boxcar. His short stories have appeared in numerous literary journals. His novella, In All Things, and his collection of travel pieces, Road Stories, have both been Amazon Top Ten bestsellers. Ed’s death row thriller, A Matter of Time, was written in real time, twenty-four hours, as the last day of the hero’s life unfolds.