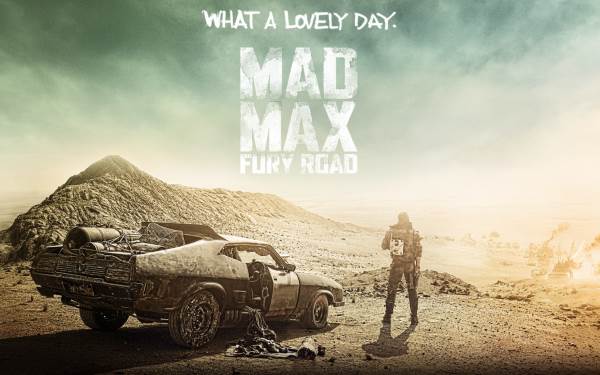 When I saw the trailer for Mad Max: Fury Road last summer, it gave me a massive, throbbing anticiboner. I love Mad Max. I love Tom Hardy. The initial images looked like they were doing it the right way, instead of throwing a modernized and weak-sauce reboot at us.

Turns out it was that and much, much more. Fury Road is the best movie I’ve seen this year, with nothing else coming anywhere close. It’s so damn good we can use it as a guide for how to improve our fiction. That’s right: we can learn about our craft from a postapocalyptic chase scene full of flamethrowers and electric guitars.

This is true even if you’re writing cozy mysteries on the moor, or hilarious chicklit about designer jeans and eating disorders. For example:

Not since Crouching Tiger, Hidden Dragon have I seen something as ugly as violence portrayed with such beauty. The landscape, the action, the vehicles, everything was a visual feast.  Tricky to do that with writing, but on the other hand you have four other senses to involve. Get luxurious with setting your scenes. Experiment with what they can communicate about the tone of your story, or the motivations of your characters. Make the environment live.

It Said So Much More With So Much Less

So many pieces of Fury Road were things we understood without having to have it explained. A little flash of a miniscene here, a line of dialogue there, and a bit of brainwork opened up huge backstories and realities of the setting. As writers, we tend to over-explain things for fear that our readers won’t “get it.” This installment of the Mad Max franchise proves we don’t have to.

The Obviously Employed an “Awesome Guy”

It seems clear from the end product that part of the writing process for this movie included a guy with a single job.

Imagine what your last story could have been if you had your own “Awesome Guy” at work on each scene (no matter what kind of “awesome” is most appropriate for your work).

True, this might have been an “Awesome Gal,” but truly only a guy would have come up with pole vaulters throwing bombs at a semi truck.

It Was Exactly What It Was

Fury Road was a sci-fi action flick, and nothing more. It didn’t try to be a commentary on modern society, or a story about peoples’ feelings, or a rom-com, or anything else. It didn’t strive to be held as high-art film (though it has elements that will crush all comers from more serious genres). It was what it was, and nothing else, to the point that it’s the platonic ideal of what that thing can be.

Now, I understand that Jack might suggest some other movie is the best film of 2015. He is wrong. He is not awaited in Valhalla, and none shall witness him become shiny and chrome. I do, however, await his feeble attempt to justify his claims…

Jason is a barista at FC. He has thrown down the gauntlet for fellow barista Jack, whose review of the film “Ex Machina” can be read here.