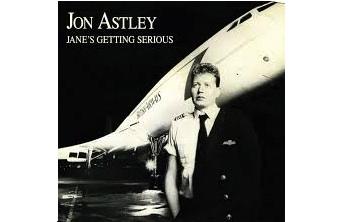 Editor’s Note: We welcome Jane Ward back to the FictionalCafé ‘zine pages with a new short story. Her first, “Balancing Act,” appeared in the June, 2014 issue. 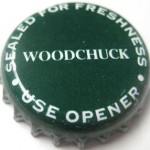 “It’s not like that,” she said. They were sitting on the steps of the old house where Raynor had grown up, looking out at the moss-covered rocks on the front lawn, and trying to get the bottle caps to land on top of the biggest rock the way they had done when they were children. The house still reminded Tara of the house in Forrest Gump, the way its size was somehow mediated by its straightforward shape and layout, so that the place managed to appear unassuming.

“It sounds pretty much ‘like that’ to me,” he told her, keeping his hand in the air after it let go of the bottle cap, his gaze never leaving the target. Tara looked at him, fidgeting with the bottle of hard cider in her hand. When they had both spoken the language of children, there had been perfect understanding between them. She, like him, had known no other way than calling it just like she saw it. Now though…she liked to pick her words carefully now. You never knew what might happen if you didn’t. It was just Raynor’s good fortune that he didn’t care.

But he had learned not to press her when she was searching for what she wanted to say. Instead he now kept his gaze forward, putting his left hand out to feel for the tin between them, to reach into it, to shuffle through the history and select his ammunition. The freshest bottle caps were from Woodchuck hard cider like they were drinking now—Raynor’s cousin Julie’s drink of choice—and of course the Budweisers his father drank. On the rock, and in the tin, it was Budweisers all the way down. Under the Woodchucks, tinged with red rust, were the Blue Moons that Tara used to bring over, the Sierra Nevadas that Raynor himself liked, the Cokes his mother insisted on buying in bottles because she thought they tasted better than Cokes in cans, the Fantas they used to bring home from Shaughnessey’s Drug Store before it became a CVS and stopped selling Fanta, even older caps so rusted and weathered and ground into each other as to be unrecognizable, but always the King of Beers at every stage.

“I don’t want to take time off work for that,” she said finally, tossing a Mike’s Hard Lemonade cap (Who drank those? One of Raynor’s ex-girlfriends? The one he’d met at The Tap Room that night?) towards the rock.

“Really? That’s your excuse? Come on.”

“But they are family. Maybe spending some time with them would make them feel more like it to you.”

“It’s a little late for that, you know? I don’t really need them anymore.”

“You always need your family.”

“Not everything’s a war game, man. And it’s not on their terms, anyway. It’s not like your uncle predicted it.”

“Nothing ever feels right to you. Take a chance for once. Stop making yourself miserable.”

Tara sighed. It was exhausting, talking to Raynor. She wondered how she used to sit here with him every day, having him pick apart her every word, her every thought before it even had become a word. It was no wonder he wanted to be a lawyer. He would be a good lawyer. If he could sit still long enough to finish law school. He was currently taking a semester off from Boston College, under the pretense of an internship, gaining life experience at his uncle Flanders’ little boutique divorce factory here in town. That was the thing with Raynor. No matter what he wanted to do in life he had an aunt or an uncle or a cousin or a family friend who could help him do it. Tara and her mother had always been alone.

Until now. Until her father’s mother had not-so-suddenly died. The woman was ninety-two years old and her health had been failing for a decade. No one was surprised when her heart finally stopped beating, and, though they wouldn’t admit it out loud, no one was particularly upset either. In the prime of her life she had been inattentive and selfish, and her children had all taken the first opportunities they could to move far, far away. But no sooner had she gotten old and frail than Tara’s father and his three brothers had begun to sing the praises of their beloved mother who had always been so good to them, and had fought bitterly over which of them her nursing home should be the closest to. The idea of her actually moving in with one of them was, of course, unthinkable, and the brother who won the nursing home fight almost never went to see her anyway. Tara didn’t understand why they did these things, but she’d long since stopped caring very much. Nana was a thousand miles away and Tara dutifully sent her a Christmas card every year, never expecting to get one back and never being disappointed. Now she was gone. That was that. One less person to pretend to love.

Raynor noticed Tara’s silence and realized he had gone too far. “Hey come on,” he said. “I’m sorry. Tell me about it. Tell me why you don’t want to go.”

“I…” Her mouth hung open, waiting for the words to come to it, but they didn’t, so it closed. Tara shook her head a little, realizing not for the first time the gulf that lay between them. She and Raynor were family. They had been best friends since childhood. They had spent holidays together, stayed home with the chicken pox together, moved north to give higher education a try together. He understood her better than anyone in the world. And yet there was this. The immense difference in the dynamics of their families made it impossible for Raynor to comprehend his friend’s hesitation.

Tara looked away from him and threw a bottle cap. It landed dead center. Right where it should. Raynor looked at it for a moment, then lobbed one of his own. Not in a slow arc, but hard and direct, like skipping a stone. It knocked Tara’s bottle cap off the rock and down onto the grass below. They each broke into a smile as they remembered the elaborateness the game used to have. A move like that was worth a certain number of points. There were other rules, long forgotten, made up on summer afternoons with no school and painstakingly written down in lost notebooks or in chalk on the rock itself and then washed away by the rain.

The game move brought them back to themselves, back to their old, easy relationship, and Tara shook her head, thinking maybe she could explain this whole thing to him after all, and he could help her make some sense of it.

But just then his phone made that abrasive whistling sound that meant he was getting a text message, and the moment was over. Raynor glanced down at the phone and then put it back in the front pocket of his corduroys.

“She knows you’re going back to Boston, right?”

“What do you mean, ‘recently?’ How often am I supposed to tell her?”

Tara turned to face him, laying her left knee down on the top step as she adjusted the angle of her body. “Look,” she said. “All I’m saying is you’ve got to remember that Becky never left. If you told her when you first got back that you were only in town for a few months…she might think your plans have changed by now.”

“Come on. I didn’t say that. She just…people believe what they want to. You’ve got to be extra clear when it comes to this kind of thing,” said Tara.

“So you’re gonna be perfectly clear when you tell your dad why you don’t want to join the family in scattering his mother’s ashes over her favorite place in the world?”

Tara turned back to face the rock, knitting her hands together between her knees. A breeze blew across the yard and onto the porch. Tara wished she had a sweatshirt.

Raynor noticed it too. The sun was fully down now. She could see the shift in his thoughts. She wanted to be the first to say it.

She hated saying it like that. Like she didn’t really want to. She did want to. But only because it was late and she was cold.

“Wanna get lunch tomorrow?” he said. 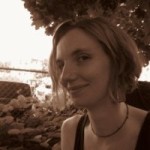 Jane Ward loves the act of writing and the mental exercise of getting to know her characters. She is working on her first novel, A More Elegant Solution. Jane has been a guest blogger for Boston Local Food Festival and Glenwood Garden, and more of her work can be found at her blog, Corn Free July, and at Jane Ward Press Folios.