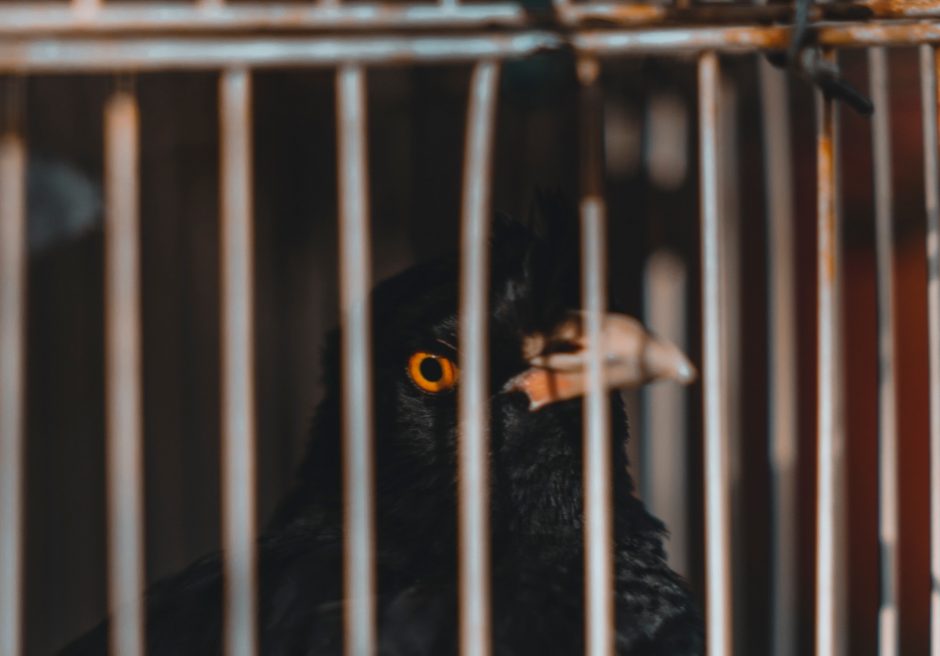 Things were a little hazy. I had resurfaced after an entire year. I knew it would take time to get my legs underneath me, and not enough of it had passed yet. Not by a long shot. Nevertheless there I stood, out in the world again. How much had it changed? How much had people changed? Had anything changed at all? I’d soon find out. The red floor was sticky. When I lifted my heel you could hear it.

I looked around the dimly lit tavern. Sparse crowd, folks still wary, or paranoid. We might still be doomed. We were doomed. Likely somewhere in that spectrum, not forgetting our recent ineptitude and iniquities as well as our successes. Dudes reeking of ganja wheeled about the place with bleeding eyes and slobbery mouths. The bald endomorphic bouncer, in a black turtleneck with a large gold crucifix hanging between his pectorals, stood by the door keeping six on them like an elephant with no tusks and no trunk ogling poachers. He reminded me of Father Fay, the brutish priest from my old parish, the Church of the Immaculate Conception. Father Fay lived and preached the Gospel of Violence.

The bottles behind the bar—ruby, cobalt, amber and citrine—reminded me of the stained glass windows of the Church of the Immaculate Conception. So much time had passed since I had set foot in it. I wondered if Father Fay was dead, and if he had died naturally or by violence, though I would wager on the latter. A framed and autographed photograph of jiu jitsu guru and conspiracy theorist Eddie Bravo—wearing an unbecoming tufted beatnik beard—stood beside the bottles in a small altar-like space of mirrors and set the ambient tone as it were, punctuated by a vicious-looking black bird—it might have been a crow—roosting in an antique brass cage by the cash register. The crow did not look sanguine. It gently cawed now and again, but I sensed it was holding back, waiting for a proper moment to properly freak out.

The barkeep, goateed and sinewy, his long hair bundled in a rebel bandana, rolled his loose right eye and asked me if I wanted another whisky. I nodded. I already had a good buzz going, but I thought, what the hell, live a little. You’ve been buried for a year, come out, come out.

“That right? Rescued from what, may I ask?”

“From death, man. His wing was broken. Found him in the woods one morning when I was possum hunting. Ain’t quite healed yet. Soon as he’s good, I’m talking back out to the woods and letting him free. He knows that. Professor Crow understands. Right, Professor? Ain’t that right?” The barkeep shook the cage. “See, he understands. Crows are smarter than people.”

I nodded. What do you say to that? Everything has a story attached to it—everyone and everything. It smelled like frying sausages in there. The place had a kitchen. I’d not eaten out in well over a year. My stomach growled.

“Yo,” I said to the barkeep, “something smells mighty good.”

He rolled his right eye at me and said, “Boss is frying up his kielbasa. He’s Polish. Polish people like their kielbasa.”

I told the barkeep I wanted to order some.

“Ain’t for customers,” he said. “He just brings enough for himself. Do smell good though.” The crow cawed lightly. The barkeep smiled and wiped the counter with a soiled cloth.

The barkeep shot me a look, then handed me a laminated card with a list of dishes, the usual bar fare. I didn’t feel like jalapeño poppers or fried cheese sticks.

“Uh, like ground beef on a bun, with your choice of condiments,” he said.

“Sarcasm,” I said, nodding, “very nice. Refreshing out in the boondocks.”

“We didn’t reinvent the burger, son, and we don’t charge the price of a steak for them like they do in those lib joints downtown.”

I slow-clapped. “I figured you for verbal flaccidity, friend, not rapier-like wit.”

The barkeep raised the right side of his lip. “You want a burger or not, friend?”

The crow eyeballed me.

“Suit yourself,” the barkeep said and swiveled away from me with a huff.

The bouncer had turned his attention away from the noisy stoners and directed his baleful gaze at me. His blocky neck suggested he had played offensive line for a collegiate football team in his past. Perhaps he had aspired to play pro and his failure had made him an irrepressibly angry young man. I wondered if the barkeep had indicated through a furtive look or a hand gesture that I was to be hassled. I sipped my whisky. It was my third and my face and limbs had loosened up. The crow gazed at me. It seemed to know I was getting buzzed. The tension in my neck had all but lifted. Say what you will about alcohol and the perils of alcoholism, a few stiff drinks now and then do a body a world of good.

So I wasn’t going to let the bouncer or the barkeep interfere with my small good time. It had been too long. I had scarcely felt human for a year. People need people. We weren’t built for monkish solitude. That is to say, only monks were built for it, or born for it. And maybe not even them. I wouldn’t let anyone take this good moment away from me. Just then, one of the stoners fell against my shoulder. I gently pushed him off. Then I saw that my lowball glass lay on its side, whisky streaming over the bar.

The stoner turned and faced me, his eyes jiggling like red jellies. He slapped a hand to his pale forehead and laughed and wheezed and rocked on his heels.

“You owe me a drink, dude,” I said, smiling so as not to provoke him into a fistfight; but he thought I was joking. “No, seriously,” I said. “Just buy me a CC and we’ll call it even.”

I wondered what Father Fay would have done in my place? He would not have thought long about it. Father Fay was a man of action. Fists and feet would have flown. But perhaps I had learned from the priest. My own instinct was to kick this idiot in the family jewels. Indeed, I had cocked my right leg to initiate the sharp, preemptive strike. That would have straightened him out proper, no doubt. I visualized the swift thrust and impact and the fellow’s shock and then nauseated reaction as delayed testicular pain set in. Always funny how that delay happens. Wham, you kick square and true, but a minute or so has to pass before the green face and whimpering in fetal position. But before I could go any further with this envisaged scenario, the barkeep swung around scowling and tightening his bandanna.

“What’s going on?” he demanded to know.

I pointed to the spilled whisky.

The barkeep shrugged. “So what do you want from me?” he said. “You wanna another drink? Pay me the money and I’ll get you another drink. Do we look like a communist establishment here? No, we do not. I repeat, hell no, we do not.”

The stoner laughed and reeled away before I could say or do anything else to him. The crow cawed loudly, as if mocking me. The bouncer padded over and stood directly behind and above me like a personal monsoon. I could smell the big man—talcum powder, Ivory soap, and ass—and feel his bulky warmth. I turned to him.

“What is your problem?” I asked.

“Maybe you gotta problem,” he said, his voice thick and phlegmy.

“Looked to me like you spilled it yourself,” the bouncer said.

“Yes,” the bouncer said, “he bumped into you and your elbow knocked over the drink.”

“You’re going to stick with that story, huh?”

“What do you think Father Fay would have said about that?”

The crow was really hollering now.

“Let me ask you something,” I said to the expressionless bouncer. “Do you believe the Earth is flat?” He lifted his chin defiantly but said nothing. I turned and faced the thin-eyed barkeep. “What about the moon?” I said. “What do you think about the moon?”

“You think the moon is fake?” I said.

The crow started violently banging its head against the cage. I sighed. I had a feeling the intelligent bird was now more with me than against me, and that gave me small comfort.

Previous post“Once Upon a Dog,” A Short Story by Bob Calverley
Previous postAn Excerpt and News from Mbizo Chirasha