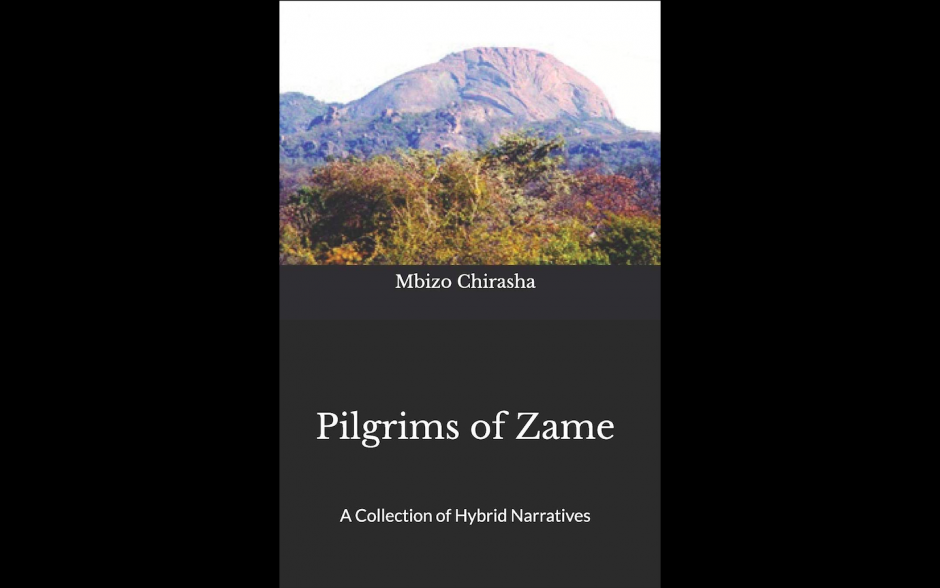 Editor’s Note: Mbizo Chirasha is The Fictional Café’s Poet-in-Residence. We have featured his work for two years now and are closing in on the end of his term. You may have noticed that we have featured less of his work this year, which, we are sad to say, is because Mbizo has been fleeing his home in Zimbabwe and trying to find asylum in another country. Due to his criticism of African politics and corruption in his writing, he has frequently been a target of violence from his government. We have partnered with a few organizations to help him find a safe place to live and write, but he continues to meet challenges.

Mbizo has recently published a new book, which we announced earlier this year. Here is an excerpt from his book, called, “Along the Wretched Road.” If you wish to support Mbizo and buy his book, you can do so here.

Along the Wretched Road

From Pilgrims of Zame: A Collection of Hybrid Narratives

Immersed in the cauldron of swirling floods, I flap my weighted wings with a singular drive, carrying my dreams in a perforated duffle bag. My feet seek the sun at midnight in the land, processing its abortion of tomorrow under the sniper’s telescope, so no truth escapes unpunished. I am a child of the South thrown further South where oceans crash with the fury of disagreed temperament. I am the child of the red soil darkened by falsehoods of high priests reading marching orders of disorders from a dishonored group purporting to speak for gods of democracy.

North is more than a direction as my eternal compass throbs against the streel fetters of burnt hope, as the night lights a path to the horizon, dragging the flag of my totem along strangers’ homesteads.

Baptized again and again by black night, by men with no names, I now acquire a new name and a newer status. They baptized me grasshopper, and I had to agree. Being a long jumper, being a high jumper, and now attempting the triple jump, grasshopper sounded a fair baptism name for a newborn boy-man lost on the long road to the finish line, chased by fathers without hearts. The process demanded I hit the road twice as hard into the no man’s square where mutation is official identity and “refugeeism” an international tag that comes in handy in the categorization of run-away undesirables, as State gossip has branded me. Back in the backyard where I first saw the sky through my father’s thatched roof, my village groans under my mother’s skirt, birthing new hope in prayer for a child firm in his ways as it carries my umbilical on green banana leaves and the scented aroma of village songs now fading into the dusty thirst of warmth from a familiar smile. Eyes accuse my paranoid senses and I jump in nightmarish fever whenever a siren rings its ominous sound. Madness is a constant threat as shadows overwhelm daylight, cornering it with harsh whispers of punishments of flame throwers onto my swollen feet and numb hands.

The next maternity ward aligned for my next rebirth and baptism is a grey room manned by grey suited men with faces long from the death of emotion. And the cesarean section they intend to perform is as crude as a hurried amateur abortionist.

What is left of my old decency and pride is crudely paraded on the cold operating table as men size my life’s worth with biased scales perhaps from Shylock’s days. Help was alluded to without insurance or guarantee. Safety was mentioned in an undertone, so I missed the term. But I came out dripping a cold near-death sweat with a number like all patients must. I had arrived at the altar of earthly saving shore, and I had acquired a new name to add to all the odd ones of the past.

My name in full then is Birthright Exchange. Exchange took my surname and clan name. A born again, baptized vagabond just got a new name and home. Except, there is a price. The price of uprootedness is the cold feeling of life standing out in the frozen snow replaying life before truth became a dangerous topic to the ears of malfunctioning States back where democracies are still in nursery schools.

The mark of the hunted is in the ring of my new name. And a name carrying the character of its bearer drones on in silent torment as time sweetly echoes old tales of the cost of a tongue to the ears of goons that live and act as gods in their appointed times and territories. Knowing me by my dozen names as boarders define me; restlessness sends me to the solitude of own company to militate against failing to respond to the call of myself on demand. I have become a spy on me as others are. I spy on my moods and my mental status. I spy on my location; I spy on faces, especially if too familiar. I spy on everything and everybody. And, boy, are there enemies!

I see them and hear them rushing to uncover the real in the unreal. I feel them creeping to pounce on me to reveal the cluster of baptism names so far accrued. I sense them stalking me in my dreams, waiting to trace my dialect and send me back to the hell I recently escaped from.

I am so very tired. I have a craving for normal. I just want to take a walk and feel the sun on my face. I miss bursting into spontaneous song just because. I wish to call a friend and laugh at life. But I can’t. For I am a sinner in the eyes of my landlord. And sinners such as I have been declared are punished by being deleted from living and their memories faded by being refused a burial.

So here I am. A born-again human with an identity crisis like an old spy who believed his lies. I am cursing life as I eat with a mumble under my foul breath. I think of my lover and spit at the sky convinced she smiles at my tormentors as a measure of gaining favor against harassment.

I am born again and bear a new name, but am far from whole, with all the holes punched on my psyche by this journey to the unknown. This process of my resurrection is digging me in deeper into a different detention camp. The only positive is I get to chronicle my spiral to where this ends unlike my malevolent accusers who suffer that I still breathe.

Yes. I still breathe the wind piloting me to the next bus stop of this life where I found a sprouting mango seed which I had flung out the window in a fate of distasteful and displaced anger. I stopped in my tracks. I stared in utter disbelief at life fighting to stay afloat at the oddest of places. I went closer to check out this miracle of rejection turning to acceptance and daring to take chances.

The seed had lost the outer covering in the hostile manner of its rejection. What will eventually be the root shot out tenderly in from of a fading yellowish-green tendril reaching down to the edge of the stone where the mother seed hung on with nothing but the will to die so the next generation of mangoes would have a chance to feed humanity.

I was ashamed of my anger that robbed this kindly nurturer of humanity and wildlife of a proper positioning for the purpose for which it now struggled.

I had walked a rough road for many a mile. There are nights when I wasn’t sure I would see light of day. I had run and sprinted from ghosts out to harm me. Now, a seed was lending its lesson on resilience in a language that knows never to give up. The seed’s concern is not that with disgust it was flung out with a bitter hand. Its purpose was to die so more mangoes could be born. Incapable of placing itself in a fertile place for better chances of survival, it stoically reached out from the ledge of a rocky perch and sent hope of growth through the thin threads of shoots.

And I knew then what I know now. That I am not owed comfort by my persecutors. That if I live or die is not their concern. That how I choose to live from now is not dependent on those who sent me here but on me.

And I was, once more, born again. This time the rebirth was physically, emotionally, and painfully personal. I knew I was neither a hero nor a worm. I realized that I had been selfish and unforgiving. I saw me for whom I had become—a grumpy soul who focused on the injuries I had accrued and not the healing I could embrace by moving on.

Then, from a distance, thunder rolled with a deafening roar. Some fat raindrops drummed on the rooftop like kids playing male drums. I looked at my teacher and Baptist, the quiet mango seed, and something passed between the two of us. We are each a brother’s keeper. And as rain pelted the roof more furiously now, I reached out and covered the little tendrils with enough soil to ground the seed to grow. Then I went back to the veranda of this home-away-from-home, facing my cowardly old eyes with the reborn eyes of a creature equal with all other creatures big and small.

And while I packed my duffle bag for the next location, I bid goodbye most earnestly to my tutor and mentor in the warm blanket of soil I had heaped on her.

MBIZO CHIRASHA is the 2020 Poet-in-Residence at The Fictional Café, 2019 Sotambe Festival Live Literature Hub and Poetry Café Curator, 2019 African Fellow for the International Human Rights Art Festival, Essays Contributor to Monk Art and Soul Magazine in United Kingdom, Arts Features Writer at the International Cultural Weekly, Featured Writer Poet Activist at The Poet A Day, Core Team Member and African Contributor to Bezine of Arts and Humanities in USA, The Originator of the Zimbabwe We Want Poetry Campaign, Curator of MiomboPublishing Blog Journal, Founder and Chief Editor of WOMAWORDS LITERARY PRESS, Founder and Curator of the Brave Voices Poetry Journal, Co-Editor of Street Voices Poetry trilingual collection (English, African Languages and Germany) initiated by Andreas Weiland in Germany, Poetry Contributor to  AtunisPoetry.com in Belgium, African Contributor to DemerPress International Poetry Book Series in the Netherlands, African Contributor to the World Poetry Almanac Poetry Series in Mongolia, 2003 Young Literary Arts Delegate to the Goteborg International Book Fair Sweden (SIDA AFRICAN PAVILION), 2009 Poet in Residence of the International Conference of African Culture and Development (ICACD) in Ghana, 2009 Fellow to the inaugural UNESCO- Africa Photo- Novel Publishers and Writers Training in Tanzania, 2015 Artist in Residence of the Shungua Mutitima International Film and Arts Festival in Livingstone, Zambia, a globally certified literary arts influencer, Writer in Residence and Recipient of the EU-Horn of Africa Defend Defenders Protection Fund Grant as well as Recipient of the Pen Deutschland Exiled Writer Grant. He is an Arts for Peace and Human Rights Catalyst, the Literary Arts Projects Curator, Poet, Writer, publicist and is published in more than 200 places in print and online. His latest 2019 collection of experimental poetry A LETTER TO THE PRESIDENT was released by Mwanaka Media and Publishing and is both in print, on Amazon. and at is featured at African Books Collective.