Posted by Jack B. Rochester in Book Reviews, Interviews, Podcasts 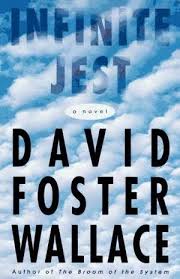 The world is divided into two groups: those who have read the late David Foster Wallace’s masterpiece, Infinite Jest, and those who have not. Tipping in at just over a thousand pages, and described on Amazon as “A gargantuan, mind-altering comedy about the Pursuit of Happiness in America set in an addicts’ halfway house and a tennis academy,” it’s not for everyone. I confess I bought it with high enthusiasm. Couldn’t wait to read it. Now, twenty years on, it’s still resting on my bookshelf, unread. Yet after hearing the people in this New York Times Book Review podcast discuss it, upon the occasion of the 20th anniversary edition being published, I’m ready. Sometimes books are like that, aren’t they? You just have to wait until you’re ready to read it.

This podcast was originally netcast on February 7 of this year; your host is NYTBR editor, Pamela Paul. She interviews Michael Pietsch, the Little, Brown & Co. editor who originally signed Wallace to write the book, and Tom Bissell, a former book editor and now author, who wrote the Foreword to the new edition. You might get a kick out of hearing Bissell discuss how he and Wallace tried to kick the chewing tobacco habit. And the word describing Infinite Jest you’ll hear most often in both of these interviews is “funny.”

This podcast is brought to you in its entirety with the permission and courtesy of The New York Times Book Review. As you surely know by now, Fictional Café specializes in fiction; the features following these two interviews concern nonfiction and you don’t have to listen to them if you don’t want to. But if you like listening to author interviews, please let us know and we’ll bring you more.

Please click on the link here to go directly to the podcast on the New York Times website.