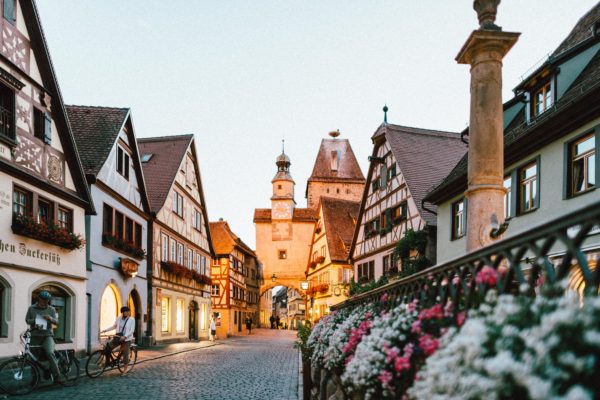 Waking from a Nightmare

I am awash in the terrible seas of the night;
dream waves lift me and drop me.
Every hollow is a deep pit:
water for drowning is its floor
and I am sure to go under.
Gold could be lead in this lack of light,
and the sea so big
no one could measure its changes.

I am rising through blacknesses,
drowned in the bleak shutting out of
even the sheer blasts of the weather.
And as I am rising, utterly lost,
the dark water leaching my last warmth

you are there soft in the bed beside me,
the mercy of your flesh draped
exactly on your skeleton.

Your body posits axioms of warmth
as you draw breath, confident
as the geometer in the sand,
and though the soldier strike you
spilling your life force,
yours is the lever that could
move the earth.

East of the Sun, West of the Moon

In the west, the sun is setting
In the east, the moon is rising
Two celestial lamps, the wayfarer in between
It is still day, soon to be dark

The quest fits the soul
as the bear’s skin the bear –
it is loose, mobile, sliding around
the body it encloses;
it suits the need for escape.

A word hangs in the frozen air: Morfedloch
The traveler turns toward
the distant hut. The bird
lifts awkwardly into the air, flapping
and clocking its thick call.

Long ago and far away

Yesterday, in a distant city

On this very spot, many years ago

Not so long ago, in a town near here

In the next street, in a house much like this

Before you were born, when we lived in Bavaria

Once upon a time, far, far away

I waited, as the word tintinnabulation
waited in the dictionary for Poe.

I remembered and forgot, as trees
remember and forget leaves.

I listened, as the quiet air
listens for a distant wind.

I named the name I did not yet know.

I quivered and resounded as I gave up
the music you wanted to play.

I forgot and remembered, as trees
remember and forget leaves.

I listened, as the air listens
for an approaching wind.

On a chilly day
they arrived on campus
like a new kind of weather,
settling thickly on the trees.
They made it darker – the foliage
thickened, opaque,
as if trees in a watercolor
had been overpainted
in oils.
So few trees in this city –
Like the birds, I was drawn
to this great double avenue. But now
I couldn’t walk under the boughs
unless I was willing
to be coated in the birdlime
raining from the weighted branches
onto the pebbled cement of the walkways.

You ventured in, despite the guanoobleck
and brought back a shivering
fallen fledgling which we named Kuzelfritz,
settling it in a shoebox for the overnight
in the vain hope of rescue.

Someday I’ll be able to buy a house

Someday I’ll be able to buy a car

Someday I’ll be able to go to Europe

Someday I’ll be able to take time off

Someday I’ll be able to give trees to the city

Someday I’ll be able to eat out again

Someday I’ll have hot water in the evening again

Paula Bonnell’s poems, fiction, book reviews, and essays have been published in magazines, newspapers, anthologies, and her own books as well as on the internet. Her recent chapbook Before the Alphabet is a story in poems of a child’s kindergarten year. Her forthcoming chapbook Tales Retold will be published in the coming fall or winter. Her book Airs & Voices was selected for the Ciardi Prize by poet and critic Mark Jarman. Message, her first collection of poems, includes the “Eurydice” sequence, chosen by Albert Goldbarth for a Poet Lore narrative-poetry prize, and “Midwest,” broadcast on The Writer’s Almanac. Her poems have been published by APR, Rattle, The Hudson Review, Gargoyle, Southern Poetry Review, Blue Buildings, The Hopkins Review, The Real Paper, and many others. Her fiction has appeared in The Kansas City Star Sunday Magazine and in The Chapel Hill Village Advocate as part of the NEA/PEN Syndicated Fiction project. She is a PEN New England Discovery writer.
http://paulabonnell.net

Previous post“If Only They Could See Her Now!” by KJ Hannah Greenberg
Previous postPodcast: “It Can’t Happen Here” by Sinclair Lewis, First Episode