Posted by Jack B. Rochester in Book Reviews, Podcasts 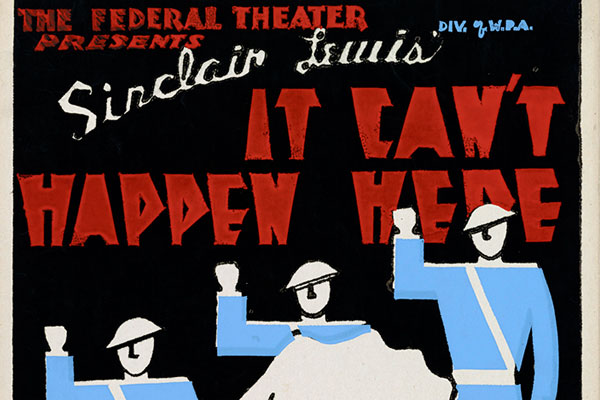 In 1935, a well regarded novelist named Sinclair Lewis published a book entitled It Can’t Happen Here.  The story concerns a senator who is perceived as a man of, for and by the people. But when elected president, he reveals himself as a dictator and turns the United States into a totalitarian police state.

This is a story which, 81 years later, still makes Americans cringe. Yet as we look toward the 2016 presidential elections, it’s hard to escape the fact that the Republican candidate frequently rings this bell. For further evidence of this view, read this op-ed from the Boston Globe by Joan Wickersham, “An eerily familiar fiction.”

Once a stage play, the novel was never made into a movie. Fortunately, it was made into an Audible Audiobook, which we are excerpting here with thanks and credit to Amazon and Blackstone Audio, Inc. Masterfully read by Grover Gardner, this audio version is available here, or you can obtain a copy of the book at this same Amazon link. It’s quite a chilling and realistic story, not only a good read but a good listen. And utterly timely.

As we usually do, we will publish one installment each Friday for the rest of the month of September.