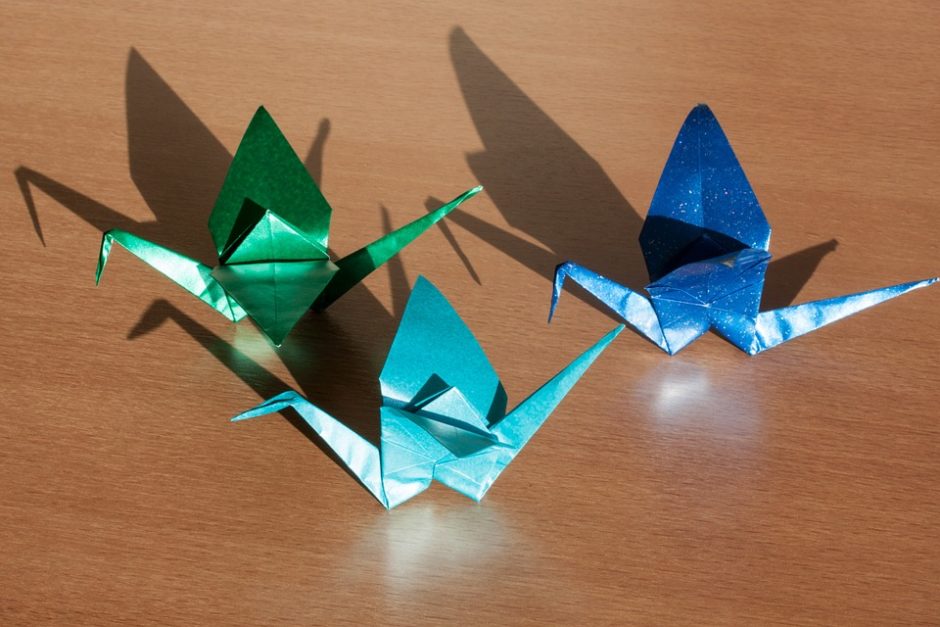 Editor’s Note: In “Paper Cranes,” our second featured short story of November, Emily Rodriguez brings us a story about love in modern times with a little twist of the ancient art of paper folding. Curl up with a mug of a mellow brew and enjoy this story.

In a weird way it’s like I actually have a use for algebra. It’s always been a game of figures and numbers. Nine steps total, thirty-seven exact creases, ten presses, approximately six pinches and a single tug. But first I need to form x. I fold the square sheet of paper corner-to corner until there’s a perfect x-shaped crease at the very center of the square. But I never solve for x. I fold the factor in on itself.

Diagonal. Horizontal. Pinch, fold, flip, and puff out until x is completely replaced with a paper bird. I haven’t mastered how to pull the tail without destroying the crane. It should make the wings move, but in my case it only transitions from bird to boat. All bow, no stern. More like a dustpan, really. Of course by that point they’re no better at floating than they are at flying or shoveling shit.

“You’re really good at that,” he says.

We’re in bed. He scoots up behind me and stretches his legs out on either side of me so I’m sitting in his lap. He hugs his arms around my shoulders and kisses my hair. I smile and pull a fresh new bird’s head out from its paper wings.

I crane my neck back slightly, the back of my head now against his shoulder. His lips meet mine halfway and we kiss until my neck starts to cramp. We pull apart and look at the paper bird in my hand.

“When did you learn to make them?” he asks. It takes me a bit to rack my brain. He chuckles at my “thinking face.”

I learned how to make them from a boy. We were in fourth, maybe fifth grade. He would make them from the shiny grease-stained papers wrapped around cafeteria hamburgers. The flimsy foil tore every time I tried to make a bird until the day they split us up. Girls went to one classroom and boys to another. My cheekbones felt heavy when my teacher dropped the word “menstrual.” It was foreign, and apparently would happen to me. My face would get spotty. My body wouldn’t stay the same. All this so point A could enter slot B to equal C. No stork needed.

I couldn’t look up from the untouched loose-leaf on my desk. While every other girl pretended to take notes, I made birds.

That boy told me I would get a wish or something after I made one thousand cranes. That was before recess when he couldn’t look me in the eye anymore. I kept making birds. We stopped talking. Eventually, I stopped counting. I have no idea how close I am to that wish. I just keep making more birds.

From cranes to dogs, dogs to frogs, frogs to paper planes and flat rockets and phallic symbols. I fold and bend through carpal tunnel cramps and nicked cuticles. I pleat paper until it cuts me and my starch-white creatures evolve with new red spotted coats. I don’t care. At some point it all just goes numb.

“How do you feel about spending Thanksgiving with my family?” I ask

It’s a conversation we’ve had before, but we never sketched out any final details. He rubs my shoulders.

“It should work out,” he says “so long as I’m out of there before Black Friday traffic.”

Makes sense. I tell him about my mother’s family. How my aunts will make a fuss over him. I tell him not to engage my father’s nephews because kids are entitled to be energetic, but not maniacs. He shouldn’t encourage it. We joke around for a few minutes before his lips press against my bare back, right between the shoulder blades. His kisses go lower and lower. My eyes close. We craft a new conversation out of heavy sighs.

Diamonds, triangles, flaps and folds. At some point I actually took it upon myself to see how many cranes I make in a day. If I start at 8:00 am I can have three finished before breakfast. I make twelve more on my break at the cafe and rush through about ten at home. By 11:45 p.m., I’ve made a total of twenty-nine. So on average that puts me at roughly two hundred and three cranes per week.

He bites my lip, then my neck. I shudder, ruffling the sheets around me. We kiss until he grabs my shoulders and pushes himself off me. He spits out long strands of my hair and we laugh. His hand cups the side of my face. I trace a finger along his lower lip. This is how I work: in small movements. I talked too much when he first asked me out. Got too excited. Whenever I spoke, my arms flew out in wide, sweeping gestures, eventually knocking over a glass of water. He said nothing, but he smiled, dropping a napkin. It floated down to the spill on the floor. He moved the napkin around with his foot and acted as though it wasn’t there. The rest of the night, my arms stayed folded against my sides. Contained.

I smile against another one of his kisses. I run my hand through the dark hairs on his chest. I think about my wish and how I probably reached it a long time ago. Maybe I’ve stocked up a few more. Do cranes count toward the wish quota even if you don’t keep them? I muse over it for a while, deciding I would wish that we could stay exactly this way. He rolls over on his side and looks at me.

“Something on your mind?” he asks.

“What makes you say that?” I nestle into the curve between his neck and his shoulder. The stubble under his chin pecks at my forehead as he smiles.

“I can tell,” he chuckles. “You’re less…involved.”

“Oh, I’m sorry,” and in a not-so-small movement, I roll him onto his back. I perch myself on top of him and kiss him hard until his breathing sounds like growls of hunger. Instead of a nibble, I get space between us when he pulls away.

“Is it the interview?” he pushes the hair from my face. I roll my eyes and fold my arms in across my chest. Ask him not to talk about it.

“They’d be stupid not to take you,” he insists. That’s so easy for him to say: he has a job. He’s secure. He has roots.

I reach for a tiny blue post-it note on the night stand and fold it in half. I bend the corners in and make a fox head, then a crown. I wish I could make something out of my degree as easily. In fact, I know I could. It’s just paper. A bachelor’s degree in art with no curatorial training behind it seems fit for folding. School after school, museum after museum, “we’re sorry” after “get more experience.” A pattern with a beginning and no end. If I don’t get this internship, I’ll have nowhere to go but back to my parents in Bowling Green. The crown becomes a bird again. Its wings are slightly torn.

I feel his fingertips teasing my hips and it brings me back. My heart flutters around in my ribcage. The bird falls from my hand and onto the carpet, joining the flock of its paper siblings.

The room is dark. I crease and bend and tear to the rhythm of his snores. Kite fold, frog mouth, diamond fold, press pinch, wolf snout. Flip. Lift. Fold. They’re all just words now. I know how they operate but they’re so far removed from the origin that I no longer remember where they fall into place in the pattern. My hands retain the memory better than my mind.

“We keep dancing around it.” It came out half discussion, half bitter laugh. He was quiet. He had an arm draped over my body that went limp, loosening his grip on me.

“Do we have to talk about it right now?” he mumbles half asleep.

“I mean…” I turned over in his arms and faced him, “long distance isn’t what I would choose either, but it’s better than not being together.”

“Or…” I chirped solemnly, “is it just over if one of us has to leave?”

He sighs, cutting up the air in the room like a paper shredder.

My throat burns. I can feel my abdomen curling inward, my ribs folding in on themselves. My collarbone feels weighed down, tugged to a gaping hole in my chest that’s swallowing my body from the inside out. I see a small flicker of something in my peripheral vision and turn my head toward it. There I am in the mirror, lying in bed, him asleep beside me. We’re surrounded by paper cranes. I have another half-finished in my hand. I am fully intact despite feeling physically crunched between someone’s index finger and thumb. I tug a newly finished crane out of the paper, snapping its neck.

“Ok.” I whispered and turned my back to him, resting on my side.

I have no way of knowing how this ends. I want to be ok with that. Still, I wish I’d never asked him. We finished our conversation in meaningless questions and one-word answers. He said “I love you.” I pretended not to hear, but parroted his “goodnight.” I turned off the lights.

The room turns slowly from pitch black to lighter and lighter shades of grey as the fading night peeps through the blinds. I hear the phone alarm going off. I reach out from under the warmth of the blankets and turn it off. I grab a new sheet of paper off the nightstand but his hand stops me. I turn around to face him and then his mouth is on mine. He pries my lips open with his own, gently pressing his tongue along my teeth. The back of his other hand grazes my thigh as he climbs on top of me. I wriggle my arms out from under his chest and reach for the blanket, but then he stops. My eyes open.

“I don’t like how we ended things last night,” he pants.

I turn my head away to where the unfolded paper lay on the floor. His hand scoops my chin gently and he turns my gaze to meet his own.

“If you get the interview, we talk about our future here,” he says. “Maybe get our own place.”

I nod but ask:

“And if my career never takes off – if I leave – what then?”

The space between our bodies is paper thin. The breath that follows his words sweeps gently over my eyelashes as he assures me.

“We factor each other in.”

My throat flushes red when he bites it. His lips trail lower and lower. I grab the blanket and cover our bodies. My eyes close. We move with each other making angles with our limbs, fluttering wings enveloped in a paisley quilt.

About Emily: “I grew up in the small town of Harvey, Louisiana. I started writing at a very young age and was fascinated by capturing and deconstructing snapshots of life on paper. In 2016, I graduated from Louisiana State University with a Bachelor of Arts in Creative Writing. My fascination with the day-to-day lives of people and my passion for writing has led me to Western Kentucky University where I am currently studying Folklore and further developing my prose writing. “Paper Cranes” is the first piece of writing I have ever submitted for publication.”