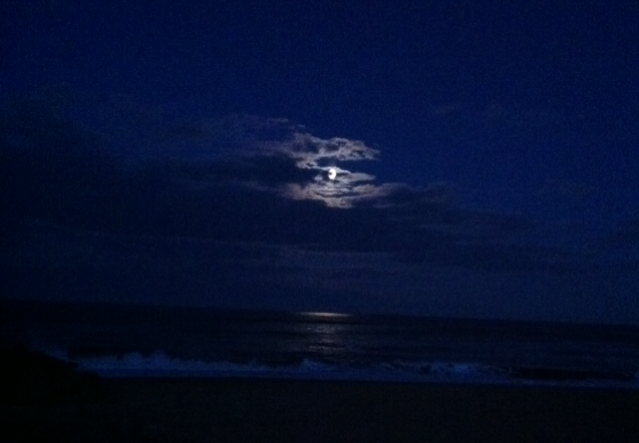 Editor’s Note: There are two kinds of creative people: the kind that create art and the kind that live it and could know no other way. I met Maria Termini at a quiet little poetry reading in my neighborhood. Within five minutes of knowing her, I could tell she was that latter type of creative person. Before the end of the night, I’d heard about her poetry and her collection of memoirs, and I left the reading with one of her CDs (on which she sings songs in both Italian and Spanish). And as it turns out, she’s also trained artist.

Here’s a sampling of her poetry that hints at the stories she’s got to tell from her worldly adventures.

When I was seven, I would shake

out the tablecloth in the back yard,

and walk around sheets drying on the clothesline,
admiring the stars punched in the sky.

When I was twenty-eight I lay,

not alone, in the summer grass,

counting stars but giving up because there were too many.

We had more pressing things to do.

Besides, stars filled our eyes.

Through the years I have wandered

alone through the clean air of remote mountains,

feeling the close company of stars

as they sing to each other.

Now I check for the stars every night

and sleep with the sky in view,

but too often stars shine in vain,

I know the stars are really still there,

holding the universe together with invisible pins,

but I still need to see them from my pillow.

Sunday With an Atheist and Trees

Surrounded by rounded so green mountains,

Across the table the atheist reminded me

that he didn’t believe in God.

I praised God for this gift of trees

And the soft sparkling songs of birds waking up,

As the atheist went on about how he was sure

He had no soul, and finished another beer.

I rejoiced at the outright fanciness of these trees,

Some with delicate feather-like leaves,

Bark with strands of thorns, and dancing vines,

So much to appreciate and I was overwhelmed.

I didn’t ask him, but the atheist went on,

With great confidence about how

He was just flesh and bones, nothing else.

That Sunday all creation glowed for me,

I was excited and wanted to dance.

I knew the view was nothing special for the atheist.

But I breathed deeply the eucalyptus scented air,

Listened to the hummingbirds flutter thunderously,

So rich and glowing emerald green,

I saw how the ferns swayed in the easy breeze,

All these things touched my soul silently,

And the atheist reminded me he had no soul.

He was working on another beer,

His eyes stayed on the bottle,

So he couldn’t see what I could see.

He went on proclaiming he is sweat and blood,

and he has no soul. No way.

And shouldn’t I be in church?

I still thought his blue eyes were heavenly.

excavated out of the junk-filled basement,

I fish it up narrow stairs and around corners,

into the small square space of the hallway,

Today I am repairing water damage.

I climb to a sixteen-foot cathedral ceiling,

on a aluminum ladder that wobbles,

If I had wings, I’d feel so relaxed

but I don’t look down and there is work to do.

The chandelier is inches from my nose,

covered with fuzzy dust only I can see.

bloom where the ceiling meets the wall,

plaster has cracked and bubbled in spots.

I balance with one hand on the door trim,

up and down moving the ladder to other spots,

The chandelier is a preposterous affair,

hanging from one weakening wire,

It could crash at any moment,

ricochet off the ladder,

slicing my face into noodles,

and it would be my fault,

I would have to pay for it,

I work through the morning,

I snake the ladder back into the basement,

replace the pictures on the walls.

As I leave the job, the chandelier messes with me,

I see a trace of its slow mocking dance,

but we have an agreement that when it crashes down,

I won’t be around.

Dancing in the Red Forest

(The Chernobyl Nuclear power plant exploded in Spring of 1986)

That disaster wasn’t supposed to happen,

but safety shut offs had been deactivated and

near May Day, time to celebrate the workers’ glory,

even as poison silently swept into the air

and still nothing looked different in the forest.

Maya, named for this month of May,

breathed the fresh warming air in this forest,

enjoying a picnic with her friends.

Maya stayed outside and danced,

after the long stone cold winter.

and ferns uncoiled to new leaves.

No one worried about contamination.

the radioactive particles were invisible and

though this fallout was more than from Hiroshima,

with a radioactive plume drifting even to Boston,

the disaster was hidden from the neighbors.

A month later, everything in the forest died,

nothing was green any more.

plowed the dead forest over,

to bury its bare ugliness, make it look

as if nothing bad happened here.

where poison lingered in the air.

The sick earth could not ignore the fallout,

some born with missing tail feathers and

her long blond hair dropped out in clumps.

She no longer dances, she barely walks.

She pays the price for dancing in the red forest.

It is a high price.

Maria Termini is a writer, musician, and artist in love with the wonder of it all. She is the author of the memoirs: The Artist and the Spy, Driving Curiosity: On the Road in Central America, and Solitude and Splendor: Living in the Schoolhouse. Her essays and poetry have been published in the Ecozoic Reader, Newton Magazine, Soul-Lit, Spare Change,Edge,  and Spirit of Change. She can be contacted at: mariatermini2013@gmail.com.