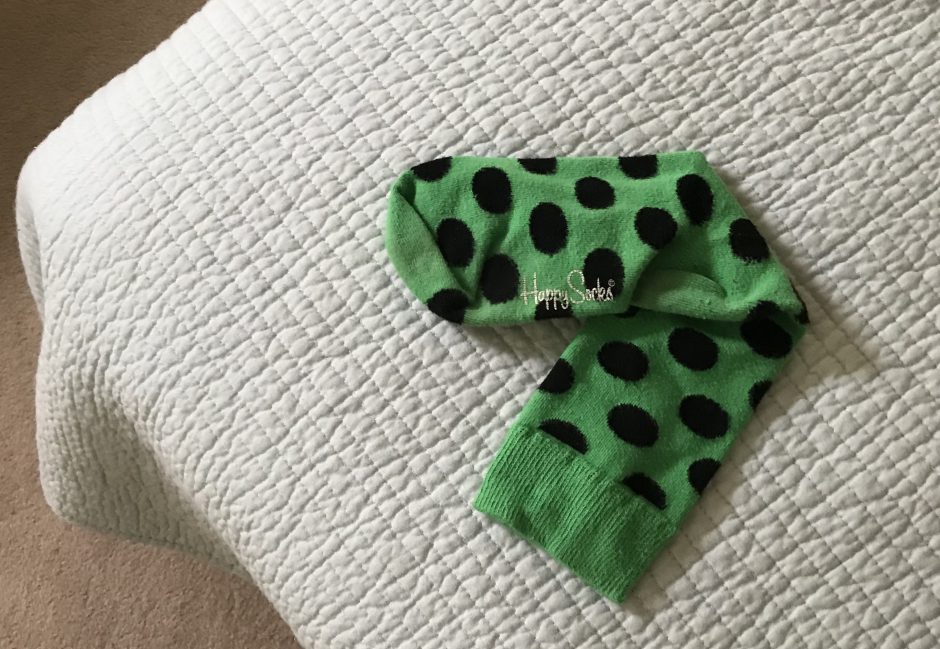 “How can you possibly go to work wearing these?”

I looked down at my feet and smiled.

“What’s wrong with them?” I pretended not to notice.

“You’re wearing mismatched socks and one of them is green for Heaven’s sake! That’s bad luck,” Bob, my all-knowing husband, hollered, before pointing his index finger at my feet. Must admit though, the look on his face was priceless.

“I don’t have to be a neat-freak like you, and besides they’re both clean. No holes in the soles, and contrary to your belief, green brings good luck.”

His frown deepened as I started laughing. I wasn’t making any sense believing mismatched socks brought good luck, but they did—this pair at least.

It all started last week when I was late for work. The alarm didn’t go for some reason, and Bob was at a conference in another city. The single green sock was sitting right there on my bed. A first-timer, I didn’t buy green socks—that I was sure of—mine were always white. Most of the time I wore stockings, and besides, green was the color of goo, sticky things, sticky gum, slimy soups. I was in a hurry, so I set my discontent aside. This green one seemed like it might fit. I looked everywhere for its partner. Not a single hint of green anywhere. I checked my wrist watch. Already a quarter to eight. I was super late. So I grabbed the first sock I found in the closet drawer and slipped it on.

The traffic that day had been worse than ever. I had a presentation to pitch. I slapped myself when I realized I’d forgotten my car keys, but there was no time to go back for them so I hailed a cab, and god, the second I was in, I regretted it.
“What’s that smell?” I said. “Could you please lower the windows?”

I remembered how my stomach lurched. I didn’t want to throw up all over my Dior ensemble and expensive boots. The driver totally ignored me, like I wasn’t there; I could see his bloodshot eyes in the rearview mirror and a couple of empty beer bottles on the passenger seat. Great, I thought, I was being driven around by a damn zombie, one high on booze.

The office was not far off. I should’ve walked, I chided myself as I hurried out of the cab after tossing the zombie his fare. I picked up my heels and as I crossed the street my laptop case slinked off my shoulder, almost hitting the ground, I managed to rescue it. The laptop was my PRECIOUS. I was not going to let anything happen to it at any cost but, well, there was a cost—I almost died! I didn’t see the speeding car, but I sure heard its screeching tires as it swerved off the road, hitting the nearby lamp post. People gathered around me. I saw smoke and steam rising off the poor car. My heart rocked in my chest like heavy metal bands and earthquakes. I could literally hear the blood gushing in my veins. I had just missed my rendezvous with Hades.

“Are you all right?”
“Will someone call an ambulance?”
“What about my car! Who’ll pay for the damages? She just came out of nowhere!”

I was in shock, sprawled on the sidewalk, hugging my laptop case, the Dior suit in ruins with dust and dirt from my fall. You are late! You are late! I kept telling myself as I pushed through the small crowd, my head all woozy, my wobbly legs not doing that much of a good job supporting me. I was thinking only of my presentation, my pitch, and that damn potential promotion. I stole away in the direction of the office. Once the adrenaline rush dried up, the pain set in.

“Arghhh!” I grunted, a loud grunt, a cry really if you come to think of it. I was this close to the building’s door. I tried to move but the pain was too much. My ankle hurt like hell and I could not put any weight on it, so I limped.

“Is everything all right, Mrs. Crawly? You don’t look all right.” The security guard frowned before rushing to my aid. I was sweating all over, my hair a total mess.
“Looks like you can’t walk. I think you should go to the hospital.”
“I have a presentation. Let me in.”
“But Mrs. Crawly, it’s Sunday.”

And then it dawned on me why my alarm never rang. My mind wandered to the green sock, an omen, a damn omen all right! Such a fool, I ruined my dress and almost got myself killed for nothing.

Off I went with my cumbersome laptop case, sprained ankle, deranged apparel and mascara-smeared face. I just wanted to go home. The pain started to ease off a little bit and I was able to walk. Perhaps I didn’t need to go to the hospital after all. I wanted to bury myself in bed. No, I wanted a hot bath. No, no no, a sharp drink. I gave the cabbie directions to my apartment complex.

“But ma’am I was just there, and there was a big fire.”

“Take me there RIGHT NOW!”

By the time I arrived, a charcoal heave had swallowed all that crossed its path.

“They say it was arson. Someone did it.”

“No I heard the concierge did it, third floor they said.”

My apartment was on the third floor!

“That’s where I live! I was there this morning.” I started talking to the man. “How do you know it was the concierge?”

“Police caught him red-handed and he confessed. He said he left behind a green sock before torching the place in retaliation.”

“In what?” This didn’t make any sense, just like nothing else in this weird day made any sense.

I could not recall doing anything that might have upset Paul the concierge in any way. Why would he do that? And why would he leave behind this green sock I was wearing right now? Then it hit me. I could have died in there if I hadn’t left early.

I called Bob. He was already on his way to the airport, taking the first flight home, I told him I was going to stay in the nearby hotel till he came back.

The fates could be weird and all, but that green sock remained with me. I could never go anywhere without it. It was my lucky charm of sorts. My ankle even got better and never hurt me again, and I was able to have that luxurious bath after all, a massage too, and a delightful meal sent to my room, courtesy of the hotel manager. Pity was not so bad in this situation.

“Well, if I were you, I wouldn’t wear that thing again!” my husband said.

“This beauty is a luck-bringer.”

“I hate to break it to you, darling, but this belonged to Linda, the maid, the last one working for us. Remember her?”

This wasn’t going to sound good.

“I caught her shagging Paul, the concierge, in our house the day before I sacked her, and baby, she was wearing nothing but your lucky green sock. Paul didn’t look that happy. I was going to report  him when I got back, but well, he burned down the building.”

I looked at the lone sock. Linda’s sock as it turned out ….

It’s not my fault I’m green. 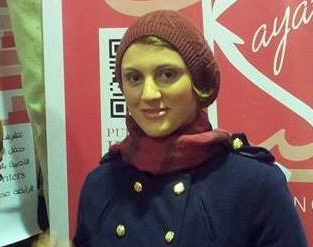 Riham Adly is a creative writing instructor and an emerging writer from Egypt with several short stories published in online lit magazines such as Page and Spine literary magazine, the 10 minutes novelist magazine, The Alexandrian, Paragraph Planet, Visual Verse and the HFC journal of arts and literature. Her short story “The Darker Side of the Moon” won the MAKAN  AWARD in Egypt. She’s not someone who lets rejections discourage her; the more the merrier. Riham currently hosts her own book club “Rose’s Cairo book club” in the American University in Cairo, Egypt to provide refuge for those few–but existing–bibliophiles.