Posted by Jack B. Rochester in Web Video

Editor’s Note: We thank Natalie Rodriguez, our Video Barista, for introducing us, and now you, to this newest addition to the Fictional Café ‘zine: video! We plan to bring you a new video each month, beginning in January, 2018.

This month, we introduce a parody-satire of the world-famous show, “The Bachelor.” It’s called, “The Bachelor: The Untold Story.” We’re publishing the trailer and first two episodes today and tomorrow, but it’s a seven-part web series you can watch in its entirety on YouTube. Here’s  how it came to be in the words of its creators.

What started off as a “you know what would be funny?” conversation turned into three insane months filled with laughs, friendships, and the beginning of Charles-Manderz & Sons, a production company run by Charlie Parker and Amanda Knapic.

“The Bachelor” is a show we adore. We love its insanity and drama, and we knew there was potential to create a parody about it. But how do two women with no budget or crew pull together a 7-episode video web series? We have no idea, and still to this day question how we pulled it off.

We were very fortunate to have an amazing and talented cast were willing to meet whenever and wherever (sometimes literally in their houses). That same awesome cast also doubled as crew, taking turns running sound when they weren’t on screen. Another big help was our friend, James Bedrich, who shot and edited the series.

The completion of  just goes to show anything is possible when you put your mind to it. Mind you, this parody is an absolute shit show, but we think you’ll like it. Thank you for watching!
-Amanda and Charlie
Please click here to watch the trailer for “The Bachelor: The Untold Story” (:53)
Please click here to watch Episode 1 of “The Bachelor: The Untold Story” (6:27)
Here’s a photo of the cast and crew. And come on back tomorrow night to watch Episode 2 and get the link to watch the entire web series! 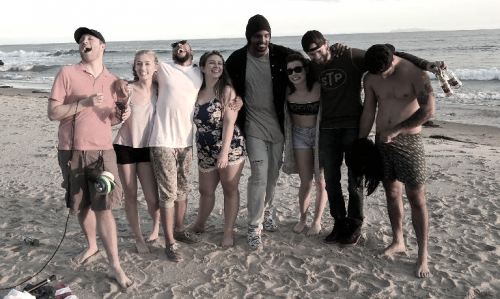