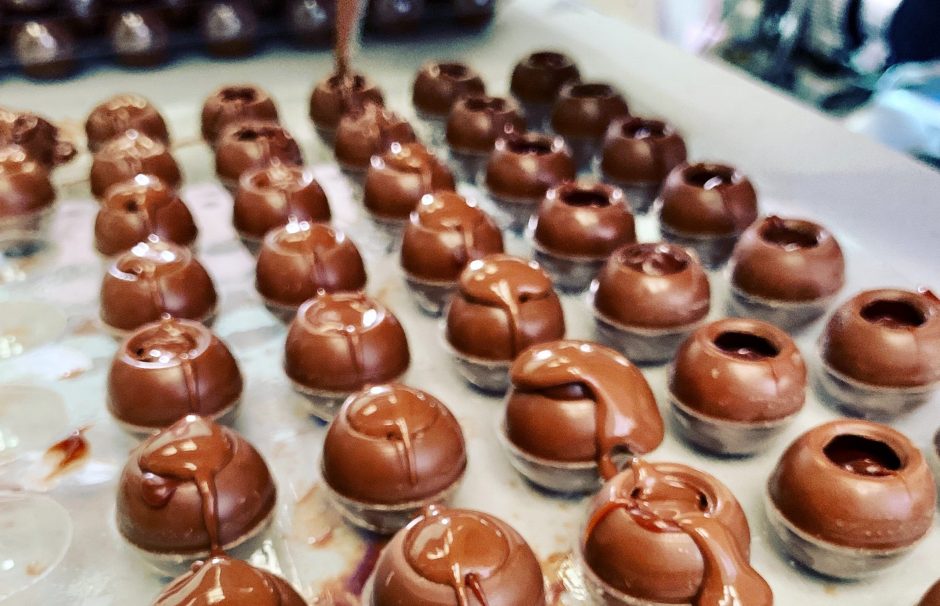 “Of course. Snickers mainly. That’s what people have heard, so it rings true if they hear it again. Easy enough to envision something held in wires, dropped down in hot oil.”

Dan eyed the man from Texas and felt a flash of home-grown pride. Travel had brought the two men together and Dan realized everything could be a competition: grilling techniques, the tang of a sauce, the cut of the meat. In other states they touted how high food could grow relative to elephants. Ridiculous, except when it wasn’t. Presently, they discussed state fairs and what could be fried at home. This prompted a lengthy litany and an appreciative silence.

“You ever try Rolos?”

“Haven’t. Gives me an idea though.” Dan pulled out his phone and punched in a string of numbers. “Hey Jed. No, I’m on a business trip. Met up with this other fellow. I want you to go buy me some Rolos and put ‘em in my freezer. Don’t ask me why. Okay. Thanks.”

They each had one more beer and called it.

The conversation kept on a low simmer for six months, until Dan ran into the man from Texas at a conference. After they exchanged hellos, Dan introduced a young confederate named Russell, a transplant from Iowa who seemed overwhelmed by his first association meeting, eyes wide, mouth agape.

“Don’t worry about him. He’ll be fine.” The man from Texas wasn’t sure. Russell looked like he’d started shaving a week earlier. Like he’d hardly take the first fingerpoke of fire before screaming and running away. Not wanting to embarrass the boy, he trained his eye on Dan.

“You ever get those Rolos to fry?”

“No.” Dan shook his head, laughing. “It made a mess of everything. Can’t blame Jed or the freezer.” He glanced at a colorful sign on the wall. Ridiculous how the convention had to advertise itself, remind members they were at a Restoration Conference, no thought about the waste in paying to produce giant posters and laminate them. Too little worry about having to throw the poster away after two days. Dan scoffed. When Dorothy landed in Oz, they didn’t put up billboards. “For a while the Rolos were blotted with hot oil. Hell, we tried peanut and canola, countertop fryer and a wok on the stovetop. Lots of splatters waiting to jump up and burn your knuckles. Everything moved too fast. Not quite an explosion, but the oil seemed angry. The smoking point—”

Someone coughed into a microphone and called them into the seminar room. Russell, apparently lost in his thoughts, trying to bore through the wall with his eyes, had to be woken. Dan patted his arm.

“Sorry.” Russell shook his head. He was a long way from home.

That would’ve been the end of the culinary muddle, except six weeks later Russell, now half-opened as an oyster, found Dan in the break room. His eyes glistened as he explained how he’d managed to deep fry some Rolos.

“It made a mess at first, but—” He recounted the speed of his efforts, temperature changes, flash-frying first, but Dan wasn’t listening. He was looking for something, anything, to help his irritated hands, which were already curved into claws. He lighted on a knife left next to a small pile of green apples. The company had several new health initiatives focused on employee renewal, including hearty snacks, but employees routinely ignored stacked apples and bananas until they attracted flies and had to be thrown out. Dan grabbed the knife. While his flesh grew spotty and hot, he stabbed Russell over and over as if unable to find the proper place to complete the job.

The man from Texas read about the incident online, though the news sites had it all wrong. They spun the story as a tale of upcoming youth, the imminent future as a threat, trying to make it King Lear instead of something along Tug Fork. He shook his head, knew better. The Rolos were personal business. Russell was a newcomer who hadn’t even worked for the company when Dan initially weighed the frying idea or called Jed. Russell had been distant and dreamy when they discussed how the experiment failed: oil splatters and bubbling over, food scorched outside and raw inside, a greasy and limp result. Too soon, before he’d had a right to it, Russell took on the Rolos.

Despite his company’s restorative goals, business often took the man from Texas on the road. He visited Dan as soon as he could. There was time—six years behind bars wouldn’t fly by. And there was pain enough to share. They commiserated about how little the world understood private betrayal. A man’s food was just one symptom in a larger system. If someone desecrated your home, that would get closer to the truth, making a castle into a grave.

The man from Texas noted that if you couldn’t have even a tiny bit of asylum, the world would freeze you out. He softened his accent for a few seconds to make the point, knowing the words would be new to Dan and might not ring true: “Hell, even the Romans understood waiting, since the Greeks started frying first. With olive oil instead of Rolos, but still. Frigere. Frigeo.” His shoulders slumped and his enthusiasm flagged. Once upon a time—another lifetime—he’d been a classics major in Iowa, merely a boy, untutored in the ways of other folk. Not for nothing either, thought the man from Texas, the way raw experience seared your skin. He spared an eye for the guards behind Dan. If they thought like men, it was only because of their power to keep others trapped behind steel bars, to see them dropped into an uncomfortable sweat. A solitude with few visitors. Considering the stories that would scorch and brand Dan for the next few years, he shivered, signaling a goodbye without intending it, thinking what he might offer for consolation, insight into the recipe of life’s strange sweetness. He chuckled and turned on his drawl again: “You sizzle just right or stay cold as you were coming off the slab.”

Matt Kolbet teaches and writes in Oregon, his adopted home state. His previous work includes satire and poetry littered about the internet. Recently, when not writing he’s taken to play hide and seek on bikes with his kids. This is his first feature on The Fictional Café.