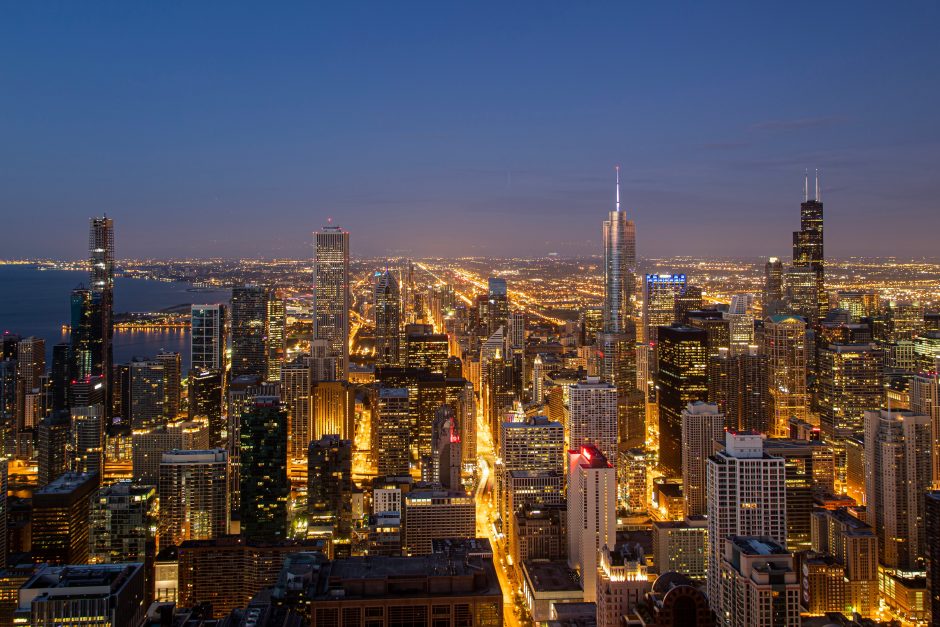 Ester hated that dress. But it was the only thing she had for tonight. Since graduating law school, she, and four other classmates would get together once a month. Supposedly, they were all such great friends, and they didn’t want graduation to pull them apart. But to Ester, it felt fake—almost coerced. It felt more like preemptive networking; everyone was keeping tabs on each other in case they needed a favor down the road. Ester never voiced that concern to anyone. Surely, it was all in her head, she told herself. But still, in her more cynical, or rather, her more honest moments, she doubted everyone’s authenticity—even her own.

She leaned back against the living room wall and stared out the window into the late-spring evening. Chicago looked beautiful at night. From Ginny’s 21st-floor condo, it looked like the entire Earth was wrapped in a brilliant orange glow. Ester’s acrylic nails clicked against the beer bottle in her hand. She scanned the bottle’s green and yellow label, trying to distract herself from the tight-fitting fabric that revealed a small bicycle tire across her waist. A dozen strangers swirled around her. She had no interest in any of them.

Ester found Ginny’s round, freckled face, and curly red hair coming in for a hug.

“How have you been?” Ginny asked, stepping back from their embrace. “Is Howie being better to you?”

Howie was Howard Bingham—a solo practitioner who had just taken on his first associate. He was fond of telling anyone who would listen about his growing law firm and how he would soon be one of the most respected legal names in Chicago. However, Howie was the kind of lawyer who would have marveled at the work of an ambulance-chaser, if he ever saw one.

“Still Howie,” Ester said, as the forced smile melted from her face.

“Oh. That’s too bad,” Ginny said, exaggerating a frown. Someone called her name from the kitchen. “Sorry. I’m being summoned.” She gave Ester’s arm a squeeze as she stepped away. “Did you see Jack, yet? His wife’s pregnant. Go ask him about it,” Ginny said over her shoulder before disappearing into the crowd.

Ester’s smartwatch tapped the back of her wrist. The green SMS bubble slid out of the way, revealing a message from her mother. She was just so proud of her little girl. Ester was barely a year out of law school, and already, she was building a new law firm from the ground up. Her parents were beaming with pride over the woman their daughter had become.

Ester sighed and swiped the message out of sight to check the time—10:17. Too early to just leave, but she was done for the night. After downing the last bitter gulp of the IPA, she was going to toss the bottle and go. If anyone asked, she was coming down with a cold.

Then she saw him.

She froze and watched him glide through the living room. It’s not that he was gorgeous. He was cute, yes. But not to the point that a woman could not look away. Everything about him was fairly average. Average height. Thick brown hair. Athletic, but not hulking frame. Still, there was something about him—some magnetic force of attraction pulling her in.

He strolled towards the glass door, slid it open, and stepped out onto the dark balcony.  No one noticed, and no one followed him. For the longest time, Ester didn’t move. What if someone asked where she was going?

I’m following a strange man onto the balcony.

But she couldn’t walk away either. Finally, she let her feet carry her towards the door. Her nose almost touched the cool glass as she peered through her own reflection into the inky darkness on the other side. She couldn’t see a thing. Then suddenly, a faint, but powerful blue light lit up the far corner of the balcony, illuminating the man’s silhouette before fading out.

Her head snapped back. She resisted the urge to rub her eyes. She was seeing things. She had to be. But then the light returned, bigger and brighter. And there he was, hunched over with his back to her.

Ester stepped outside, and closed the door behind her without making a sound. Then the light came again, but this time, the gorgeous glow cast off a ring of sapphire ribbons. They arced just overhead, spinning, dancing, and raining down cool sparks until they burned themselves out.

The man spun around.

The man held out the iPhone in his left hand.

“It’s my phone,” he said, giving Ester an intense side-eyed glance. “What did you think it was?”

Ester shook her head and stepped closer. “No, no. The lights.”

The man’s eyes darted from side-to-side, and then to the door over Ester’s shoulder, as if he were planning an escape.

Ester opened her mouth to speak again, but nothing came out. Suddenly, she felt very cold. She hunched over, and stepped back, as her breathing quickened.

Ester shook her head. “No,” she whispered. Cold anxiety was giving way to warm embarrassment, and then to scorching humiliation. But just as Ester turned to run, the man grabbed her hand. Gently, he turned her back around.

His lips rolled into a smirk. “I didn’t realize you could see it, too.”

Just then, his brown eyes turned an electric blue.

The man held out his glowing index finger, and pressed it against Ester’s forehead. She somersaulted backwards, and the ground melted from beneath her. Everything was blue. Something like a massive shimmering blanket wrapped around her, enveloping her like a cocoon. She felt warm, secure, but above, she felt joy—true elation like she never had before, more intense than she ever dreamed possible. As suddenly as it wound around her, the cocoon released, and she plunged downwards.

Miles beneath her, the city laid sprawled out, as far as the eye could see. Hanging in free fall, the ground rushed up to meet her. Warm air rushed around her as she fell through the night sky. But she wasn’t afraid. She was energized—euphoric, almost manic. She wanted to land. She wanted to plant her feet on the approaching ground, and then she would run. She would run one mile, then ten, then one hundred. She wanted to take the city in, to meet every person, to show them what was happening—to tell the world that this kind of ecstasy was possible. The orange-lit streets grew closer and closer. And just before she hit the pavement, she snapped upright in her bed.

Her head spun wildly. But there was nothing—no light, no warmth, nothing. She sprang from her bed, and checked the kitchen, the bathroom, the linen closet; she was alone.

“Huh?” Ginny grunted into her phone.

“Oh Geez, Es. What time is it?” Ginny asked, stirring beneath her sheets.

Ester pulled the phone away from her ear. “Nine forty-one.”

There was a loud retching sound, followed by an even louder splattering noise, as if Ginny has just spilled a heavy soup on a hardwood floor.

“Tequila,” Ginny moaned. “Why tequila?” she asked her bedroom ceiling. “I know why. Celebrating Jack’s baby. Just had to be tequila, didn’t it?”

“Ginny, who was that guy last night?”

“I didn’t see you on the balcony,” Ginny said. She heaved again and retched up more of last night’s libations.

“He was kind of average height. Dark T-shirt. Brown hair.”

Ginny was breathing directly into the microphone. It was slow, and labored. Ester felt sick just listening to her.

“Was he there with someone?”

Ester didn’t realize how hard she was squeezing her phone.

“Do you have his number?”

“Weird. Only people I talked to on the phone were my great-grandparents. So, this is what it’s like.”

“You think I should call Al?” Ester asked.

Having exhausted all of her options, Ester threw her phone down on the bed. Her head fell back onto her pillow. She wanted to close her eyes, and see that glow again—to see the city sprawled out beneath her. But she couldn’t. The memory was like seeing it in a museum—like looking in from behind a plexiglass wall that she would never be allowed to cross.

She took a shower, hoping to wash the desire and then the memory from her mind. It didn’t work. Compared to last night, the hot water felt like an ice bath. She dried herself off, and got dressed, putting on a hoodie, and sweatpants.

Saturday passed, and then Sunday did too. As she crawled into bed Sunday night, she forced maybe Marty out of her mind. She would never see him again.

Monday morning came. She got to work, said good morning to Howie, and immediately regretted it. Howie used the salutation to pontificate on the experience he had and the procedures he would put in place to ensure their firm would be the envy of the legal world.

Just get to lunch.

At 11:30, Ester headed towards a new place two blocks down. It was a Mediterranean fast-casual, build-your-own-bowl kind of place. It wasn’t her favorite. But it was decent and different. That kind of variety was tragically hard to come by. She stepped out onto the busy sidewalk, and then she saw him walking right towards her. Without conscious thought, she reached out and snagged his elbow as he passed.

“Yeah,” he answered, giving her that familiar side-eyed glare. “And you are?” he asked, pulling his arm away.

“Ginny?” Marty asked. “Oh. The redhead that was letting that guy wear her like a hat?”

“You made me leave,” Ester said.

Marty shook his head. “What are you talking about? I didn’t make you do anything.”

“You did that thing,” Ester said. Her eyes pleaded with him. “You put your finger here,” she said, pointing just above the bridge of her nose. “And I…”

Marty didn’t say a word. He just stared at her, horrified.

Marty shook his head again. “I need to go.” He rushed past her before she could object.

The ice in her belly was beginning to burn again when suddenly, the sky grew dark. The sun rushed down behind the western horizon, and night fell on the city. Ester whirled around, and saw Marty reaching up towards the sky, painting it black.

“You’re a lot of fun to mess with,” Marty said with a grin.

Ester rushed towards him. “It’s real?”

He held out his hand. Ester wrapped both of her hands around his. They both floated upwards, levitating just off the pavement. Hot euphoria washed over her, stronger than ever. Marty hovered on a cloud of blue flame, but beneath her feet, Ester’s flames were red.

Ester’s wide eyes spoke for her, as she nodded.

They lurched forward together. Two streaks of color—sapphire and crimson—intertwined. Marty led her to the river. They zipped just above the choppy water, pulling up, looping over the bridges, and slicing insane turns around half the skyscrapers in the Loop. Hand-in-hand, they swirled around the Sears Tower, going higher and higher. And once they cleared the tower, they rocketed into the night sky, reaching towards the stars.

Ester bolted upright in her bed. Her head spun wildly, scanning her empty bedroom for any sign of him.

Then she heard a voice from the kitchen.

In college, Zachary discovered his love of reading, and knack for writing. He minored in English, focusing on composition, and creative writing. Several years after graduation, he decided to build on that foundation. “Crimson” is Zachary’s first published piece, although he is already working on his next short story, and his first novel. When he isn’t writing, you’ll find his nose in a book, or an audiobook in his ear. He lives with his family in Chicago. This is his first feature in The Fictional Café.