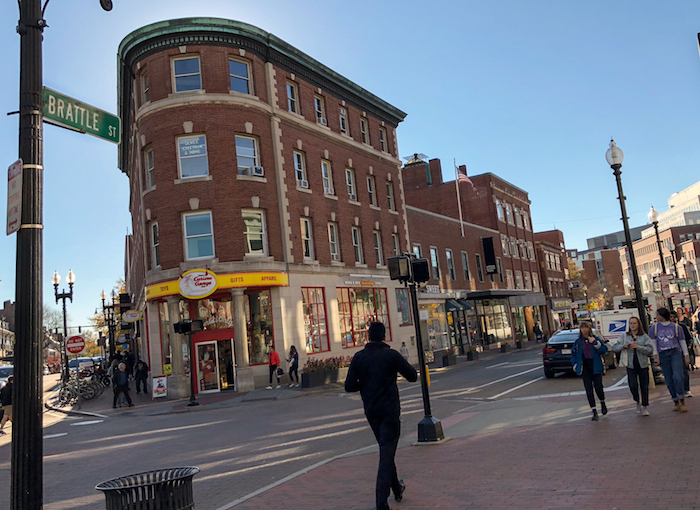 We met Daniel in Harvard Square, where he stood at the corner of Mass Ave and Brattle, typewriter poised to write a poem for a dollar. We asked him to write a poem for our dog, and what he pounded out on the old manual keyboard was sublime. We asked for more, and a correspondence ensued – Boston, New Orleans, Florida – and produced the following excerpts from his impressive body of work. Here’s how he describes his writing:

As for the story of how I came to write poetry in Harvard Square: it has everything to do with my love affair with New Orleans, which started three years ago when I hitchhiked from New York to the Big Easy. New Orleans is a place where there’s an established legacy of typewriter poets that goes back a decade or more and it planted in my head the seed of what I do now.
**

In summertime, you give up walking and swim through the air. They’re dangerous, those summer swims. Several friends once tried to cross the city and washed up on the other side of town, nearly drowned. On days like this the local saint, Mr. Malo, jumps aboard a vintage Coca-Cola cooler and rides it out into the street. He throws cans to the people dying on the curb: the panhandlers and the pedicabbers, the fools and first-time tourists, the day-swimmers and any thirsty lizard. Several people have been saved from the verge of the Permanent Nap, simply by adding sugar to blood. Though Mr. Malo remembers a time when these streets grew high with cane and the recipe was reversed.

The Brief Story of Sunday

Red saw a different girl each day of the week. Murder brewed between them all. He would take them back into his room and screw the black bulb into the lamp. They opened their chests and let him eat—flinching without a sound. A new Day came along who thought, like all the others, she could become an era. But with the black bulb in its socket and her heart held in his teeth, he mumbled the name of another girl. Drops of whiskey slid down her cheeks. “I love you too,” she said. And wished she hadn’t.

To Gild a Bumblebee

He went ahead and caught

and plated all its yellow bands

It was a beautiful thing.

And when the village saw it

there was a great auction

in which all the richest ladies

And when it was done

he tried the same thing

He burned up as he worked.

It was a beautiful thing

the way the sun

One Sunflower Turned to the Other

One sunflower turned to the other

“When the sun burns out

The other one played coy:

working behind the canvas.

He cut off the ear

that could hear the stars

But he could not afford

to quiet the ruckus

I sit on my stool

Hovering just over the subconscious

And pluck out the golden aardvarks

that swim just under my feet.

‘Love poem, fit for any woman.’

‘Ancient wisdom, back in vogue.’

They line up and pay

good money for my catches.

And I assure them:

I could stay awake for 7 days.

I could chat nonstop

for a double shift.

I could dream about Nirvana

There are stars on the bottoms

of both my shoes

from walking through the foyers

There are coins shining in my eyes

and the Ferryman is after me

a whole new life for myself

I am now a baby

from the mouth of a fresh

Am I not beautiful?

Sunny day, you bloom black on me.

I am ready to demote

to the state of longing glances.

My strength is not failing.

I do not believe my dreams

I simply want to glance and glare

you’ve put me in possession

of the firm belief

that some of the greatest artists of history

have been lost to us

because they could not network.

And I have also been nursing the strong suspicion

that an artist is only as great

as how many others they outshine 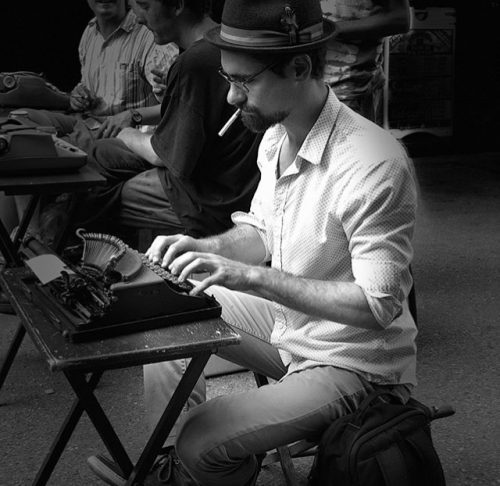 Daniel Lev Shkolnik owns a Yale sweater he will never wear. He takes his Faulkner with absinthe and his absinthe with an orange rind. In Istanbul, he learned to read the future in his coffee grounds. Despite the omens he repeatedly finds at the bottom of his morning joe, Daniel continues to write.

After a fated hitchhiking trip from New Haven to New Orleans, Daniel fell in with the street poets who kept starvation at bay writing poetry on typewriters for passersby. Back in Boston, he met Bruno, his 1927 Remington Portable No. 2, and began writing on frigged puritanical sidewalks. He’s since relocated to New Orleans where his fingers don’t freeze in the wind, where puritans are scarce, and where his first novel is nearing completion.

Daniel will be publishing two poetry chapbooks in the coming months. To receive updates about his upcoming chapbooks sign up for Daniel’s weekly poetry emails by clicking here.