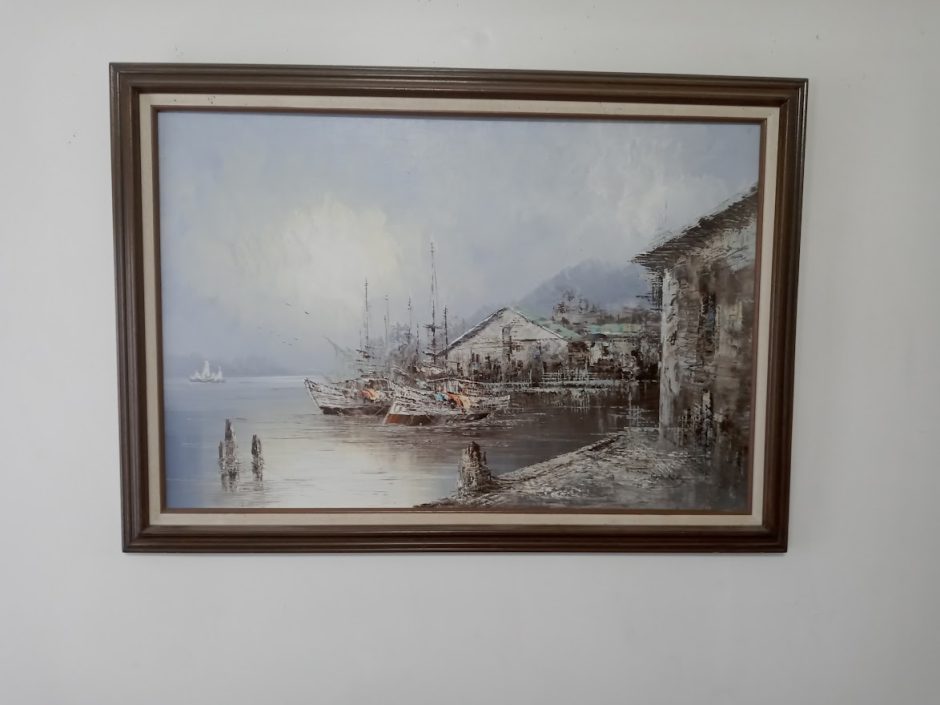 She first notices him at the far end of the room, lean, rugged, rough around the edges, wearing dark-wash jeans and a grey hoodie under a brown leather jacket. He has short-cropped coppery-red hair and two days’ worth of reddish scruff. He rubs leisurely at the side of his face while pondering a watercolor on bark paper, an evocative rendering of a lonely fishing boat tied to a weather-beaten dock in murky water. He steps back, slightly tilting his head. He can feel her attentive gaze, but pretends not to notice. When the moment is right, he sneaks a peek and likes what he sees. Her dress is just tight enough, a navy-blue number with white trim and matching high heels. She has chestnut brown hair that’s shoulder length and silky smooth, piercing green eyes and a playful smile.

He rubs again at the side of his face and gives her a cliché wink. He’s seen all he needs to see of this lonely fishing boat. He plows through a smattering of people and moves on to the sculptures, shelf-sized and larger, perching on small and large pedestals throughout the gallery. The sculptures, made of bronze, are graceful interpretations of the diverse creatures of the sea. She too, turns her attention to the bronze sculptures, admiring a large elusive piece, almost abstract in appearance, of a Giant Squid gracefully descending the ocean’s depths. She is on the opposite side of the room from where he stands and loops her way towards him, going from sculpture to sculpture. He does some strategic looping of his own and catches her eye. This time, she’s the one who does the cliché wink. He raises his left eyebrow in response.

They circle the bronze sculptures, keeping a playful distance from each other, pacing the pristine hardwood floors, oohing and ahhing at the oils, acrylics and watercolors that hang on the gallery’s freshly-painted white walls. Eventually, they find themselves standing side by side in front of a massively large acrylic seascape of a fierce river, raging its way through a lush valley. He steps back to take it all in and she follows suit. He rubs at the side of his face. She strokes her chin and before she can stop herself, she strokes his jawline. He smiles knowingly. He tells her he’s “new in town.” She asks for details. He says he “needed a fresh start,” then changes the subject.

“You’ll like it here; Syracuse has a lively art scene,” she tells him. She pauses, studies him from top to bottom, as if he’s another bronze sculpture. “Your accent, is that from Georgia? Alabama? Mississippi?”

“It’s not an accent to me,” he says with a half-laugh. “So y’all like the way I talk?” he asks with an intentionally exaggerated Southern drawl. She is quick to say “absolutely.” She asks him a few more questions; he answers with questions of his own.

She takes him by the hand and leads him to the far end of the gallery where a table of wine and finger-foods awaits. They settle in amongst a handful of chit-chatting people gathering around the refreshments. He zeros in on the wine. “Red or white?” he asks. She points to the white and he pours her a drink, making sure their hands touch when he passes her the glass.

“Tit for tat,” she says, motioning towards the wine choices. “Pour me the red, it’s good for the heart,” he tells her. She sips at her white wine and in between bites of Brie on a Ritz, says: “I love how this show is structured, four artists, each working in a different medium; the curator pulled it together beautifully.”

“Yes, the theme is well-executed,” he says, “and the artists invoke such diversity in their work and yet they fit together so well.”

He smiles and says “pardon my reach” while brushing against her and helping himself to a few pieces of Bruschetta. He looks at her plate of Brie, Swiss and Monterey Jack. “Got anything against tomatoes and olive oil?” he asks. She shakes her head no. “Then try this,” he insists, placing a piece of Bruschetta in her mouth. “Delicious, truly delicious,” she says, quickly grabbing a napkin to wipe at the side of her lips. They laugh, talk and laugh some more.

He downs two more glasses of red wine as if he were doing shots of whiskey. On the table, next to an overflowing platter of Ritz, Triscuits and Wheat Thins, they both notice a bowl filled with Goldfish crackers and laugh in unison, immediately getting the joke, whimsical as it is.

On a wall, just a few feet away, she points to an oil on canvas of a lighthouse towering atop a rocky coastal bay with a beam of light poking through the thick fog, its rustic distressed-wood frame enhancing the mood of the painting. She smiles broadly. “That’s my favorite of the oils, maybe my favorite piece in the entire show.” She almost lets it slip that she’s one of the four artists and that all the oils are hers, but she’s not ready, just yet, to spill the beans.

“Cool, that’s definitely one of the best,” he says, devouring the last piece of his Bruschetta. “But hands down, my favorite is the oil painting of the old couple strolling by the shore with the waves rushing in.” She fakes confusion. He rubs at the side of his face and gives her more information. “They’re in matching blue windbreakers; she’s wearing a kerchief; he’s got on a fishing hat.”

She strokes at her chin. He grabs her by the hand. “Let’s go have us a look at it,” he whispers. They head toward the opposite end of the gallery, hand in hand, skillfully maneuvering their way through the clustering clumps of people and the graceful bronze sculptures, with beaming smiles on both of their faces.

Paul Germano lives in Syracuse, smack dab in the center of New York State, with his dog April, a charming and strong Pit Bull mix. Germano had loads of fun writing “Circling the Bronze Sculptures” by appointing himself curator for his story’s themed-exhibition and conjuring up a handful of artworks for his characters, and his readers, to appreciate. Germano’s fiction has been published in roughly 45 print and online magazines including Boston Literary Magazine, Bright Flash Literary Review, The Drabble, Flash in a Flash, Sledgehammer Literary Journal, Voices in Italian Americana and Word City Literary Journal. “Circling the Bronze Sculptures” is Germano’s second appearance in The Fictional Café, which published his story “Coffee in the Moonlight” in 2016 and reprinted it in the magazine’s “best of” anthology The Strong Stuff in 2019.