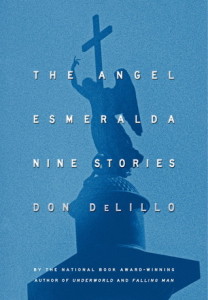 The Angel Esmeralda spans 30-plus years of writing from Don DeLillo over nine short stories. In typical DeLillo form, The Angel Esmeralda harnesses the fundamental humanity of his characters – whether the situation is monotonous everyday life or spectacularly distant moments in time and space – to create a vivid patchwork of submission, heartache and paranoia. These are not feel-good stories, but cautionary tales told by a writer with the gift of seeing the world as it really is and who is deeply disturbed by these visions.

The collection begins, fittingly, with “Creation,” a story about those dark endeavors that occur when love has left a relationship. The narrator and his wife, Jill, are on vacation on a tiny Caribbean island near St. Vincent. We instantly see that things are not right because even though the couple had been sailing, swimming and taking chartered yachts through the islands, there is a distinct disconnect between them. The narrator points out that Jill reads her book in the taxi all the way to the airport, looking up only once – to look out the window at children playing. Later, she tries to get information from the taxi driver, and the narrator rudely tells her, “Read your book.” Their interchanges are short, irritable sentences – hardly the way we expect two people spending a vacation in the Caribbean to talk to each other.

The tension comes to a head when the couple find out they will miss their connecting flight to Barbados, leaving them unable get home to New York. In his heightened state of marital unhappiness, the narrator decides to stay on the island and let his wife go home so he can secretly pursue a fellow tourist: a German woman named Crista. The two have a short affair – all the while he tries to seduce Crista into staying, while she insists she must go home. He has anointed her his savior and wants to stay in this moment as long as he can before going back to his repressive marriage, like a child in his final days of summer vacation, trying in vain to stop time so that he doesn’t have to go back to school.

Yet, the narrator’s idealism is a mirage; we quickly see that even their affair isn’t what he’d expected. It’s no surprise, as Crista is only halfheartedly interested in the affair as a means to pass the time while she waits for a flight out. His ploys to get her to stop trying to get home and enjoy their time together don’t work and he becomes the needy, controlling pursuer.

A man desperately seeking happiness, unable to accept his life and the decisions he has made. He chose to marry a woman for whom “boredom and fear are one and the same.” Yet there are no mulligans for life, so as we witness his futile struggle we can only hope that it does not become ours one day.