I walk up and down Harrison Avenue, looking for number 450. Google maps is no help. Art galleries are scattered about this tiny section of the south end between the residential neighborhoods and the Mass Pike. Eventually, I notice throngs of people coming and going from a pedestrian walkway between two buildings.

This is in fact Thayer Street, the heart of the SoWa art district of Boston. As I make my way through the wonderland of galleries, each one filled with the liveliness that a warm June Friday night in the city elicits, I am swept up in the enthusiasm and passion of the surrounding creative endeavors. 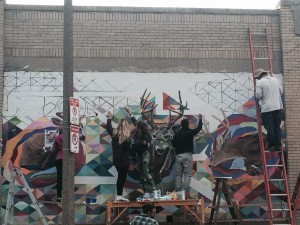 I come up to a rust-colored sheet metal sign hanging above a small gallery. It reads Movimiento. I’m here.

Inside, the space is industrial with a brick ceiling, exposed HVAC ducts and water pipes. Spotlights are attached to fixtures above, their wires exposed.

On the walls, five artists have hung their photographs of the South American partner dance, the tango. The photographs range from intense action shots on the dance floor to light-hearted moments of fun, like a man dressed in drag, tangoing with another man in an apartment.

I walk around the perimeter of the room looking at each photograph, hoping to see through the artist’s eyes. Tables with cheese, grapes, crackers seltzer and wine fill the middle of the room. In the rear, a few children share a leather couch with a group of carpe noctem women.

The crowd skews older, 50-plus, some coming from work and some starting their nights out on the town, dressed in shiny old-world necklaces and pearls.

Many tango dancers have come to see themselves in the photographs. Accents abound. Trilled R’s cut the crisp spring air.

A vase of fresh flowers sits on one of the refreshment tables, which are art themselves: steel, industrial, yet quirky with personality. A large corrugated sheet metal plank stands in the far end of the room, the word “Tango” running down it in shiny metal letters, riveted to the base. Bright red roses adorn each letter.

After three laps around the room, I identify Barry. He has a gentle, wise air about him and greets me hospitably. He talks with me a while, as we share appreciation for what the other does. One of the great rewards of my job is the pleasure I get from helping creative folks share their passion with the world. 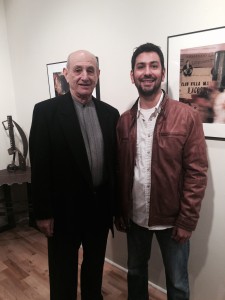 Barry introduces me to AnaLinda Marcus, a charming, lively woman who is in charge of the space. She teaches tango here and occasionally hosts art exhibits, like tonight. On warm summer nights the class dances outside in the courtyard.

People continuously pop in; they’re cruising the strip of galleries, swooping in and out like birds feeding on insects amongst trees.

As I peer into a photo, a woman with wiry grey hair and lively eyes asks me in a heavy romance language accent, “Do I know you? You look familiar?” I say, unfortunately no. She says it must be because I look like a tango dancer. I smile and take it as a compliment, then extend my hand and say, “I’m Mike, I work for the Fictional Café. We posted a preview of Barry’s exhibit on our site.” She smiles back, halfheartedly, apparently still disappointed that not only does she not know me, but I’m not even a dancer – but merely a writer.

Over the din of the crowds, tango music plays from a MacBook plugged into the sound system. As the people thin out, the music becomes more prominent and creates a theatrical atmosphere over the photos. Standing close, in front of the photos, one feels as if he’s in the room with the dancers who clutch each other close, releasing tangotonin. 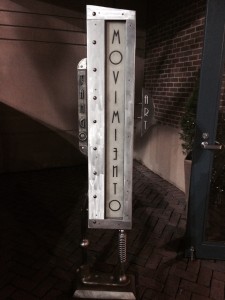 My favorite photo is a panned out shot of a group of dancers in front of a large wall with advertisements all over it. The dancers in the foreground are in motion and blurry, while the wall is crisply in focus behind them. In the bottom left corner, barely in view but fully in focus, a woman sits at a table alone with several drinks in front of her, gazing at the group, a blank expression on her face. Her big eyes affixed on the group starkly contrast her with her solitude.

Another favorite, a close-up of a bandoneon being played. The instrument shines brightly, reflecting the light above, as the sides go in and out, making the instrument totally blurry. The hands are a whir of activity, and the only stationary aspect of the photo is the knee of the bandoneon player. He looks like a specter. Adding to the disembodiment of the man is the blackness that exists where his torso would be. It’s as if he is not there; that the hands are ghostly fragments, enchanted as in a Disney movie.

As the crowd thins out even more, AnaLinda asks, “Does anyone want to dance?” She dashes about and minutes later the lights dim. And the floor opens up.

The music begins and a couple instantly pairs off and begins dancing, then another and another. 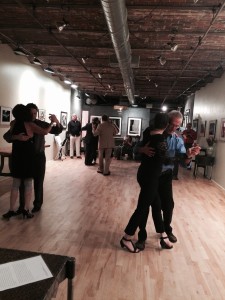 The sound of tango music fills the room along with the distinct shuffle of feet on the smooth hardwood floor and the dancers are enveloped in a soft white light as the cool post-dusk air flows in from the open gallery door. Bodies move, twisting and twirling, some pairs gently gliding about the floor, while others snap their feet and hips and move in complicated figure eights. 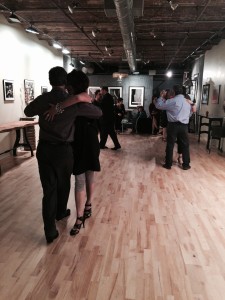 I take my leave and walk back through the rows of galleries and up the elevator to see what else is in the building. It’s a huge old factory with a brick skeleton exposed in places. The overpowering smell of paint and paste transports me back to my 4th grade art room. The walls are adorned with flyer after flyer, advertising each artist’s gallery. Still-in-use pieces of work are scattered about the halls and draped over railings in the staircase that contains huge cast iron pipes and pressure gauges like a college dorm’s boiler room.

As I walk through the corridors, I see dozens of studios – a veritable hive of activity – each one brimming with the vitality unique to artists. At 9:15pm, it is these besmocked night owls who come alive now, while the businesspeople who work two blocks up have gone home long ago and now sit amongst their families in robes or sweatpants.

I exit the building through a doorway with a cinder block doorstop, watching artists haul equipment in and out. This previously unknown magical pocket of the city, still buzzing with life, had caught me off guard and riled my senses. As I make my way home and SoWa slips away into the distance, I suddenly feel a kinship with Alice as she emerged from her phantasmal dreamland.