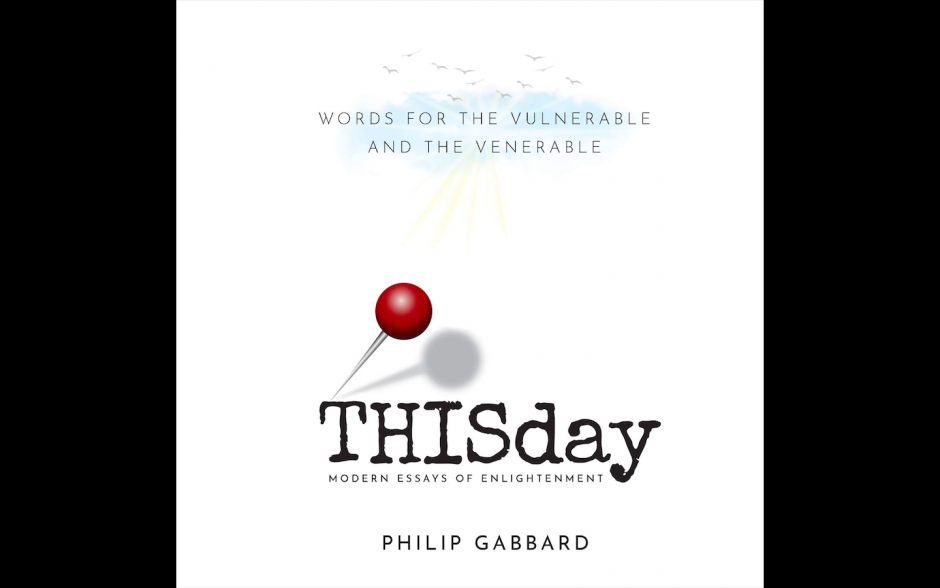 Editor’s Note: This post is an excerpt from: THISday-Words for the Vulnerable and the Venerable by Philip Gabbard, a book of essays and *creative nonfiction.

Wordsmithing Past The Editor

Could you imagine if Mark Twain or Pink Floyd wrote ad copy today? Although, while  sixty-second ad copy wasn’t a “thing” in Twain’s day—he was widely heralded for penning some poignant one-liners back in the late 1800s, like saying that  common sense ain’t so common. But even Twain had his  influencers. Perhaps it was Voltaire who similarly wrote the same line a century and a half earlier. Then in truth, the fact that common sense hasn’t been, well, common has been common since AD 130, when the Roman poet Juvenal first wrote that there was  not a more uncommon thing in the world than common sense. And I can only think that that was something Juvenal  heard from his dad, over and over! And that’s how words go, they linger and influence  and inspire. And too, it makes me wonder if Mark Twain or David Gilmour wrote TV ads today, would we get their message? Would we understand their meanings? Or, would people even care?

With this concern, my discussions with my editors went like this: “If I write as I speak and like I think, which ‘ain’t so common,’ and I write with varied intonation, slow and fast, with odd word arrangements that are not pleasing to literary rule makers, or rule followers, how do I deliver an original message that challenges conformity?”

Ugh! Book editors have so many rules. Many of these rules are the same rules that got smashed when Shakespeare and Twain showed up. More rules fell at the poet’s pen,  followed by the songwriters. Artists like Bob Dylan, Pink Floyd, The Doors, and Bruce Springsteen all produced game-changing contributions to the art of saying what needs to be told and how. Including what needed to be said, and when. Their words can last a lifetime, and then some. Their words can give you perspectives never before realized, and change you as they have me, and like they still do. Great songs and great artists and writers make me think, challenge my preconceived notions, and ask me to study  my world and how I fit in. Springsteen, Dylan, Roger Waters and David Gilmour, Jim  Morrison, Elvis Costello, Neil Peart, Sam Smith, Khalid, and countless others share their perspectives so vividly, and do so from their life experiences, observations, and struggles—and were influenced by those that preceded them. Somehow, each of them had the gumption to write something, say something, and do something new and different in a different style and a different way. Bob Dylan’s words fascinated an entire generation  of people, and launched societal changes and spoke truth to power. Springsteen gave a voice to the voiceless and shared the strife of the blue-collared man.

Jim Morrison, Elvis Costello, and Neil Peart lent us insight into worlds we didn’t  know existed until they gave of themselves, no matter how strange. “People Are Strange,” “(What’s So Funny ’bout) Peace, Love and Understanding,” and “Freewill” are lyrical testament to this fact: Without these songs and words, the world would appear more like a room without a window—existing, but without a view of anything not formed by man.

And from these musical influences, we can witness and provide testament that the evergreen spirit of shared words flourish with new voices like Sam Smith’s and Khalid’s, who awaken us and replenish us with their words and give us a sense that so many more authentic words, stories, and songs must be said, shared, and sung without constraint because the absence of any one voice is tragic, and the conformity of any one voice is tragedy’s muse.

These artists are authentic, vulnerable, and real. And if they had not spoken, written, or sang, then who would they be? Where would they be? Would they be fighting the critics, those traitors whose opinions matter to so few? And if they conceded to the conformists, would they be invisible, like those of us who stay in line and not speak up or out? Would they be like those of us who feel quashed or tamped down by those who appear to be on a rung above us, wielding some semblance of power over us? No, these artists took a path that most would rather skip; they bucked the norms, and each played, read, and sang their words to anybody who would listen. They performed in small crowds, in clubs, and on street corners. Why? Because what they needed to say mattered, even if it mattered only to them. In time, each would grow to entertain  millions while at the same time in influencing countless others in all aspects of society—and they would inspire at least one guy I know. That would be me; and fifty years later, THISday  shows up on my editor’s desk. Poetry, it is not. Different, it is. Influenced by all before who thought, said, and shared their voice for the first time with the world. THISday  begins by understanding that we all have something say. We must find our words, and speak them. Or don’t, and wallow in ignorance, misery, or even worse: unknown mediocrity.

Philip Gabbard is an author, creative writer, creative director and ad-man entrepreneur. He is an influencer of influencers in the world of Hispanic corporate advertising, a media sales trainer and podcaster. Philip earned his degree in Journalism while playing offensive guard at the University of Texas-El Paso before launching into the fast-paced media world in the 1990’s. He now resides in El Paso. You can find his book THISday-Words for the Vulnerable and the Venerable on Amazon. This is his first feature in The Fictional Café.