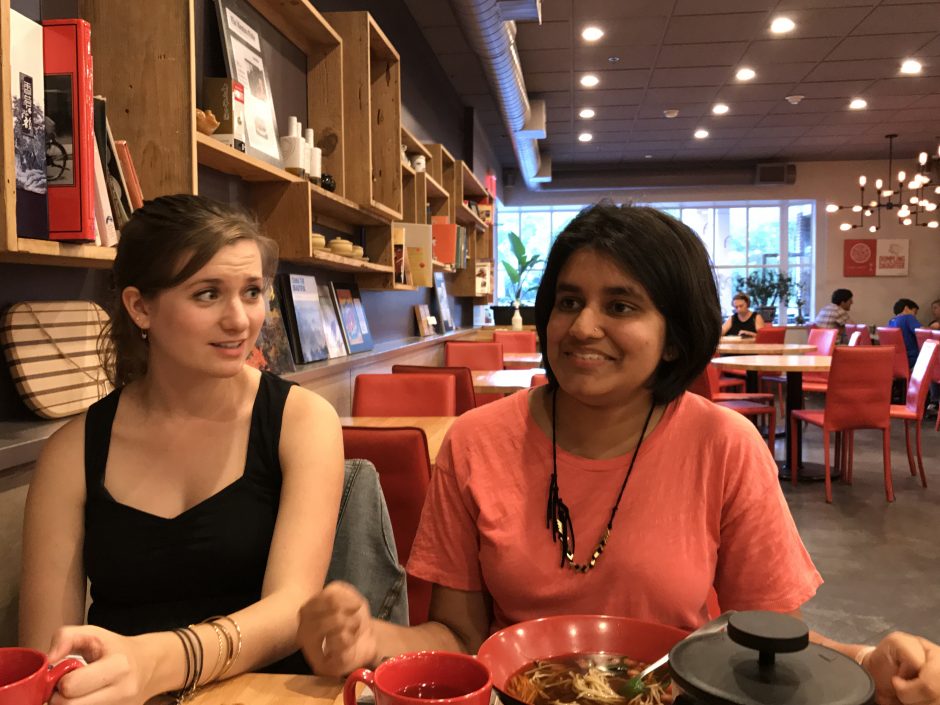 Editor’s Note: Since May, we’ve had the opportunity to read and share the fascinating and insightful correspondence between two American Study Abroad students: Rachael Allen, who attends Bowdoin College in Maine, studying in Bologna, Italy, and Simran P. Gupta, a student at Simmons College in Boston, studying in Paris, France. [Full disclosure: Simran is our poetry barista here at the Café.]

Once our pen pals were both back Stateside and had a little time to recover and readjust, Mike Mavilia, our managing editor, and I invited them to dinner at Dumpling Daughter in Weston, Massachusetts. A lively conversation ensued about the three differing cultures, dining habits, driving, bicycling, the comparative pace of life…and the longing to return, to return soon, to stay longer. The photos taken at our dinner accompany this last exchange.

We want to thank Rachael and Simran for being our FC pen pals and gracing us with their thoughts and feelings expressed so eloquently through their excellent writing. You can read the preceding exchanges by going to the Q [the search function] on the blue FC menu bar and typing pen pals. 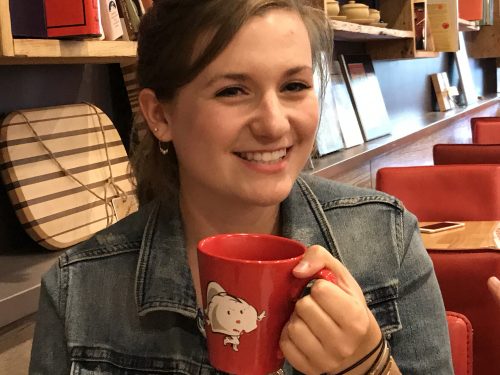 Welcome back! I hope you’ve been enjoying your time at home, despite missing France (they do say Boston is like a European city, right?).

I have been missing Italy too. I miss the spontaneity of my days, the energy of the students, the food and coffee, the medieval buildings I thought were dark and gloomy back in January. In this past week at home, I have bought an espresso maker, accidentally said “grazie” to a waitress at a restaurant, and watched primarily movies and television shows that take place in Europe. I have also tried not to be a snob and compare American food to Italian food. (Does it count if I think it in my mind? Quietly?)

It’s easy to miss what you don’t have, I know. Despite all the parts of Italy that I miss, the sliver of myself that felt alone abroad, the piece that filtered each new experience either with the thrill of independence or the nag of loneliness, is gone. In short, I’m comfortable. I feel whole at home. My missing Italy has become something almost satisfying—the fact that there was something to miss in the first place.

When people ask, I say my time in Italy feels like a whole different life. I’ve come to think of it as a story whose ending is already written and bound up neatly. I said goodbye to my dorm room and kitchen and roommates. I made sure to eat all my favorite foods and to walk down my favorite streets. I teared up when my feet left Bologna soil—a.k.a. as I boarded the plane—and then I actually cried when I felt the plane take off. I guess you could say I’m sentimental? But everything in those last few days felt so final, as if closing credits ought to follow each goodbye.

Of course, this is life and not a movie, so everything keeps going, and this continuation has felt the strangest. Eight and a half hours later, I walked off the plane, waited in customs for over an hour eavesdropping on people talking about the red and the blue, and then hugged my family, feeling as if no time had passed. I saw my friends and imagined that our joint television show had returned, after a brief hiatus in which we each had separate spinoffs.

Later in the week, I ate at Boston’s Eataly with my mom and found myself sad to see so many familiar Italian products there (note: I dramatically saved one final Pan di Stelle, a chocolate and hazelnut cookie best enjoyed with tea or coffee, until an hour before I left Bologna). A few days later, I Skyped with a friend back in Bologna, then later that night watched Diane Lane visit the same places as me in Under the Tuscan Sun. How easily 21st century transport and technology makes for the blending of cultures and communication. It’s wonderful, really. It just simply confuses my sense of finality.

This is the point, I guess. It’s not final because the experience is a part of you (and thankfully, the place is one you can return to one day). My friend in Bologna said I’d carry the best of this experience with me. I think I’ll take the best and the worst, and believe that it’ll all be helpful later on, because in that way it never ends.

Thanks for listening to me convince myself out of believing abroad has ended. 🙂 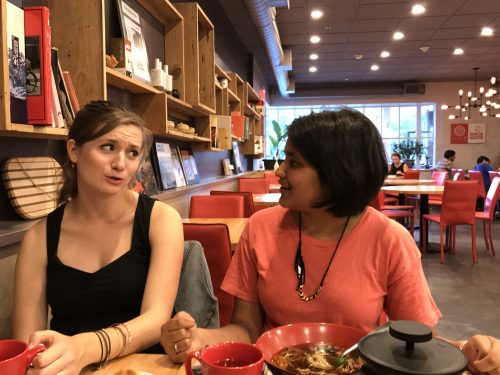 In the name of full disclosure, I have actively been looking for ways to make Paris a part of 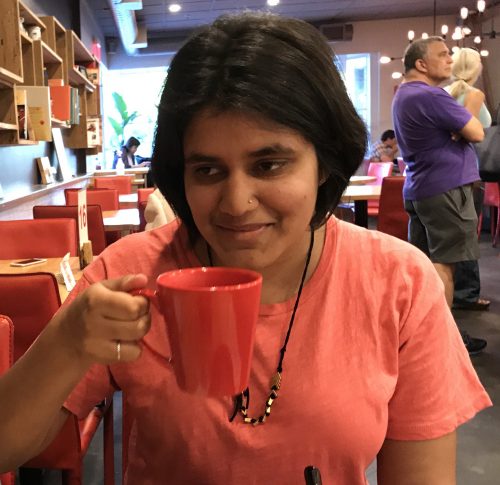 my future since my return. This semester abroad has reawakened an itch in me that wants to travel and hop from country to country so badly, I am strongly considering a life as a nomadic English teacher. I miss the café culture that forced me to pause (even though I know I told you I missed the US café culture that allowed me to do schoolwork there). I miss the pace of life, the incredibly efficient metro, the coffee, the river, the beautiful buildings and tiny streets.

I think that most of all, I miss solitude. It took me so long to get used to, but now that I’m preparing to return to the hustle and bustle of my familiar campus, and now that I’m back home with my parents, grandparents, and two siblings, I realize how much I took that solitude for granted. I like what you wrote about using the wonders of television and film to revisit Italy- I have been doing the same with Paris (and anywhere in France).

Something that has helped ease my Paris blues is planning future travel, even if its in the form of a short, one-or-two week graduation trip next summer. Looking forward to new places to explore, or old favorites to revisit, helps to channel the restless energy I’ve been feeling. Don’t worry about being a snob in comparing American food to Italian cuisine- I compare US coffee to French coffee out loud and in my head! So if you’re a snob for making the mental comparison, I’m one even more so.

I like what you said about your life back in the US being like a television show that is now continuing after a short hiatus. When I was in Paris, I often felt as if I had hit pause on my real life. After returning, it was almost like my semester never happened, as if it were all a dream. It still doesn’t feel real. I’ve been thrown back into my daily grind of work and school, and I’ve been frantically writing down my mental images of the Pantheon and my old favorite walking routes, as if reliving the memories that way will make it more real.

I have been unpacking and reorganizing my room, beginning preparation for the GREs, and have even begun research for my senior thesis. But the truth is that Paris, and French in general, is embedded into my life so much more than before. I like to believe I’ll be back there, in a tiny apartment on the outskirts of the city, back on the steps of the Pantheon with my notebook and a cup of coffee one day. Until then, It’s French music, movies, literature, and my many pictures that will have to tide me over.

Maybe one day we can take an FC field trip abroad! At the very least, we should have some coffee and weep over the end of our study abroad experience together 🙂 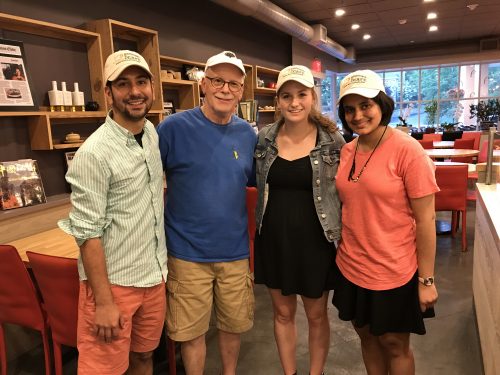