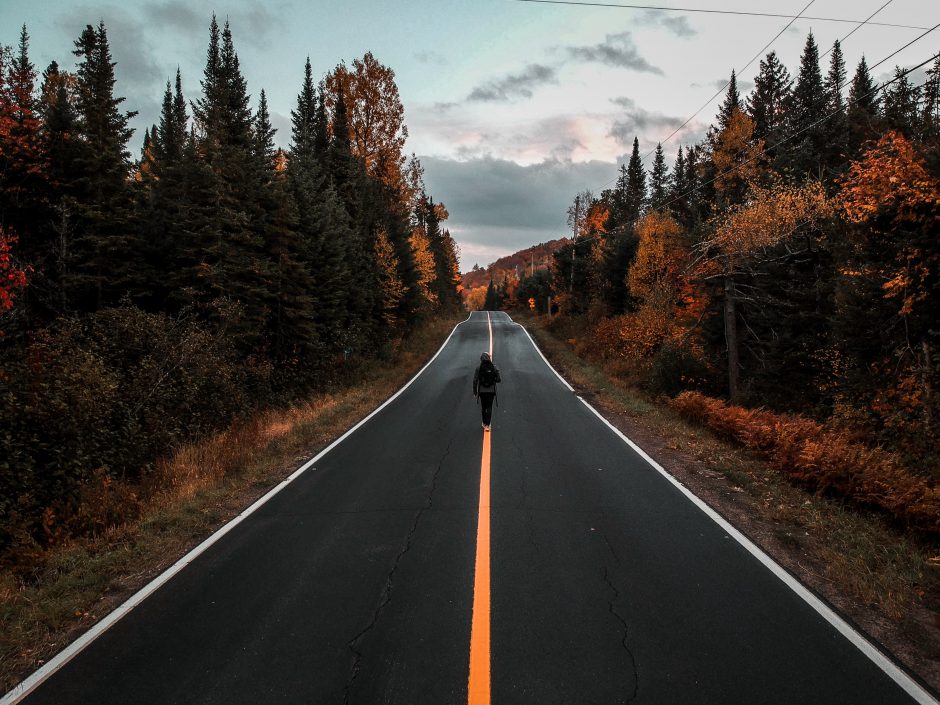 The call came in just after 1 a.m.  “Hey, I got a question for you,” the male voice said. “Am I right that it’s not OK to walk to Rhode Island on Route 1?” O’Connell on dispatch managed to get out “What?” before the guy continued.

“Walking on Route 1 .. I didn’t think it was allowed and just wanted to check.”

The voice sounded semi-sober; O’Connell had heard plenty worse. But sober or not, who would think of walking to Rhode Island on Route 1, aka Boston-Providence Highway? A four-lane divided highway lined with shopping malls, office buildings and car dealers. It had to be at least 30 miles to the Rhode Island line. Sure, there were stretches in Grenville with sidewalks; but had he ever seen anyone on them? And going south through Norwood, Walpole . . . Sidewalks?  He had no idea. Still, the guy had asked.

“Well, I don’t know there’s any law against it,” answered O’Connell. “Why are you headed to Rhode Island?  Kind of a long way to walk, isn’t it?  Where are you now?”

“I’m near the mall. Trying to get home to Pawtucket. Someone told me just to walk Route 1. I didn’t think it was legal, but I guess it is, huh?”

“Don’t see why not, as long as you stay on the sidewalk or off on the side of the road when there’s no sidewalk.”

“OK, thanks.” The guy sounded disappointed. He hung up.

An odd one, O’Connell thought. He’d better alert Smith in the cruiser just in case.

Fifteen minutes later Smith’s voice crackled on the line. “OK, I see your guy . . . just going up on the bridge. There’s a sidewalk, but he’s not on it—he’s in the road. I’ll get him.”

Flicking on the blue lights, Smith pulled up behind the pedestrian. The guy turned around. Dark parka, khaki pants, not a kid. Smith got out and approached.

“What’s up? You OK? How about staying on the sidewalk?”  The guy looked at him in silence. No sense in prolonging this, Smith decided.

“OK, get in here and we’ll go over to the station . . . see what’s going on,”  Smith opened the door and beckoned.

The guy stared at him a moment, then walked toward Smith and got in the cruiser.

“Tough night?” asked Smith as they drove to the station.

“Yeah, went out for a few and I missed the last train. Called my wife and she told me to walk home . . . just walk home on Route 1,” she said. “That’s why I called to check whether it was legal.”

“Yeah, well it’s OK on the sidewalk but not in the roadway,” replied Smith. The guy grunted.

“You think your wife will be happy now if she has to come pick you up?”

Smith let that one slide. At the station, the guy gave O’Connell his name, age, address. Rick Pilsak, age 42, of Pawtucket. He repeated his story of going out for drinks after work and missing the last train out of Boston. He got a lift as far as the Grenville Mall, where he started walking.

O’Connell asked if he wanted to spend the night at the station until he cooled down. “We can’t let you out of here if you’re gonna walk in the road.”

Pilsak looked at O’Connell for a moment. “You know why I did that, right?”

“So your wife would have to come up here for you?”

That was enough for O’Connell.  “OK, you better spend the night here.”

“You think she’ll appreciate a call at this hour?”

“Well, you have a phone, go ahead and call her.”

What the hell. O’Connell turned around and called the number.

Four rings before a groggy voice picked up.  “Hel-lo . . .”  O’Connell introduced himself and started into the story. She interrupted.

“Tell him to go to hell. I don’t care what he does. He can spend the night in jail for all I care. I’m not coming up there.”

“Yes, ma’am,” O’Connell soothed. “That’s probably what he’ll do. He just wanted me to call you.”

Forty-five minutes later, a horn sounded outside the station.

“There’s my ride,” said Pilsak as he headed for the door. To O’Connell’s surprise he was grinning.

“Thanks for everything, officer. Have a good one.” And he was gone.

O’Connell turned back to his desk.

Stephen Brayton is a Boston-based financial communications consultant and former business reporter with the Boston Herald. Steve has penned a number of articles for his local historical society newsletter. His first short story Ghost Train was published by The Fictional Café in 2019. He developed Walking to Rhode Island from a police log entry in his hometown.

Previous post“The Girl on the Train,” A Review by Jennifer Green
Previous postLaura Carter – Poems of Sensations and Memories
Posting....