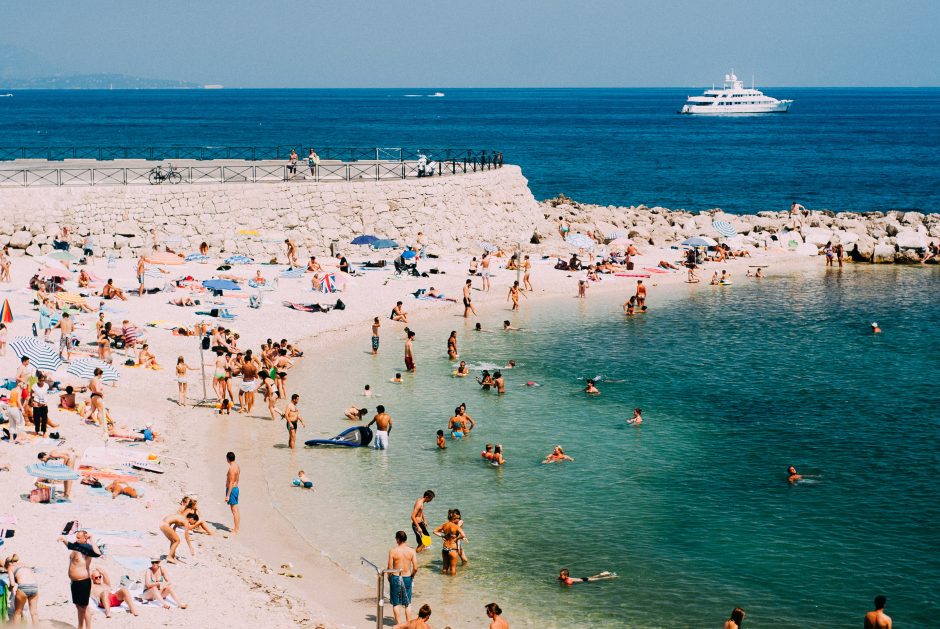 Sam lays beside, a strap released and delicate to the touch, bare back to the sun with a touch of whiskey to give the afternoon a kick.

Charlie ties her hair back and applies lotion to Clay’s nose as he regales us all with tales of Amsterdam misadventure. A girl at each window, feigned desire amid fatuous aside from each passing native. Clay took a girl to a room, she cried as he undressed, he paid and let her be. She took his hand as she closed the door and returned to the window, he waved as he passed and that was Amsterdam.

Clay has a fight in two days and Charlie notes he’s looking gaunt. He says it’s worth it for the adrenaline alone and it will not keep him from the whiskey. Charlie’s eyes fail to hide a dismay more than casual, Clay gives her knee a slap and tells her he’ll be fine, ‘at worst you simply sleep awhile’.

Silicone breasts bobble beneath sheer bikini and careless banter, “It’s blonde but not blonde blonde,” and “At this point they don’t even ask for ID.” A child wobbles seaward bound as Ma and Pa follow, weighed by beach chair and beach bag overflowing. The ocean offers mystery but I am not intrigued, Sam will swim when the sun begins to fall and Charlie will join her. Clay and I will share a silence.

Charlie passes the joint and I offer to my left, Sam inhales while I hold and I inhale and return to Charlie and then onto Clay and before long she will make the rounds once more.

Sam’s father will marry in the morning, an aspiring actor with dimples and teeth for days. He’s young enough to be an elder brother and Sam claims she finds comfort in this, the brother she never had. Clay claims he can take him and silently we all agree. Charlie removes her top and lies face down with a hint of resignation. Tomorrow will arrive and we will all be better for it.

And Sam’s tan line will fade and Clay will fight and Charlie will attend as I reach for the whiskey and wish the moon’s arrival.

And Clay’s eye is black and yellow, yet he cannot resist a smile on recollection. Charlie feels concern which Clay denies and begs him to stop but only on occasion and at an angle, with Clay nothing is ever linear.

Sam has a new father she calls a brother and we all swallowed an hour ago and are only now feeling the effects. Clay looks like Clay once more after making weight, Charlie fingers with a tussle in her hair and Sam lies in white bikini bottom, nipples to the sky.

I suck a lollipop I bought for a dollar, strawberry and cream, tongue makes play as mind relents. The sun is glorious, the clouds have parted, the sand is golden and all is cliché but for once this is most satisfying.

I wore a tux, got drunk on expensive wine. We swayed on the dance floor covered in white petals to eighties hits amid daughters on fathers’ feet. Sam looked beautiful.

Some spy Sam as they pass, sideways glance, sly grin and an elbow. Sam covers her eyes with her arm and comments on the heat with a wiggle of her toes. Charlie removes her top and lies back on her towel, I fear for Clay’s reaction if passers-by glimpse that moment too long. Clay is not one to fear affront.

“To think we came from the sea only to return,” says Charlie. “Even the Pope agrees,” replies Clay, “though mother says he’s simply playing nice. She says it’s important to play nice, even if you’re the Pope.”

And Clay’s wounds will heal and marks will fade, Charlie’s fight with Clay will resolve, Sam will hold her new father’s hand and for now all I need is music to consummate the afternoon.

And Charlie drinks the whiskey with a withered look at Clay and then must look away once more. Clay peers through eyes near closed, one arm encased in plaster. Charlie tidies her towel and lays back in silence after one more swig of whiskey for comfort.

Sam hides her eyes from the sun and pulls her bikini top as it pinches. Charlie had made eyes at another and Clay was in the parking lot removing his jacket before he realized the other’s friends had followed, and the rest of the story lies within the bruises.

Sam’s new father has cast eyes on her once too often and her suspicions are much discussed. My psychiatrist filled my prescription on demand and so I lie languid, while somehow both above and beneath it all.

Clay murmurs for the bottle and Charlie replies he can get it himself, Clay reaches over and takes a swallow or two and as he returns to his towel he strokes Charlie’s shoulder and for now she does not brush it away.

Single men prowl in long shorts and gym bunny bodies, gel in the hair and laughter less than casual. Women’s heads turn a touch before they return to lotion and laughter that more than hits the mark.

And Sam will return with tan lines, Charlie will take Clay’s hand and I will continue moving forward if only for the quiet sensation of movement for its own sake, and the beach will remain though the tide may wither.

Michael writes from a shack overlooking the ocean just south of the edge of the world. He has been published in several literary magazines and plans a short story collection sometime before the Andromeda Galaxy collides with ours and …