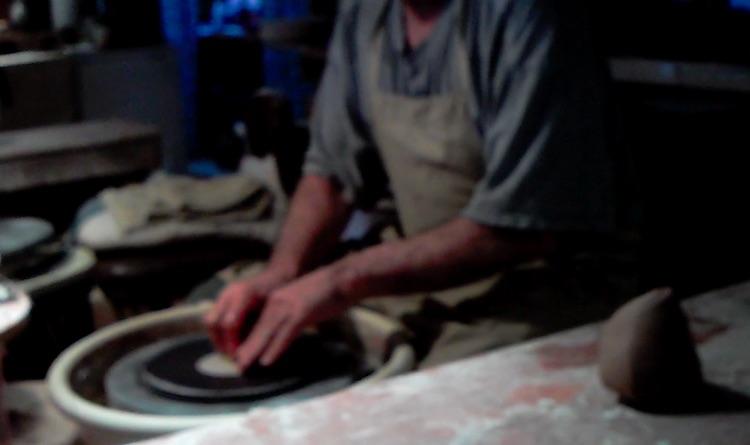 The seventh-floor studio apartment in the Soho District of New York was $4,000 a month and had been vacant for three months. The previous renter was an artist and left everything behind. He had 220 wiring installed for his kiln, which sat proudly on high-temp blocks. The electric potter’s wheel sat wanting for attention and shelves lined the north wall that still displayed thrown bisque-fired pots patiently waiting for their glazing.

The west wall held an apartment-sized refrigerator, sink and small granite countertop that presented a hot plate, coffee pot, and a mug tree, which held a single cup. Bare wooden slats squeaked under the pressure of footsteps, dusty from layers of dried clay splashed on the floor.

The greatest attribute of the studio was the windows. Total glass along the east side allowed the sunlight to brighten the ancient brick walls and bare, steel I-beams that ran across the ceiling. Chloe mused as she gazed at the sky, the surrounding towering buildings, and the organized stream of mortals flowing to their destinations. Yellow cabs streaked through the streets, screaming at each other with their riotous horns.

Chloe lifted a lower window and stuck out her head to peek over the edge. Pigeons landed on the precipice; their heads bobbed in unison with their left foot as they marched along the ledge. She inhaled the mixture of vehicle exhaust mingled with grease from local restaurant fans.

This old converted warehouse with twenty-foot ceilings was now home, and she needed to do some deep cleaning.

In a corner, covered with dust and cobwebs, stood a collection of canvases of various sizes. A six-foot folded easel lay against the brick wall and beside it was a small, antique table holding a large clay ashtray, filled to the brim with old cigarette butts. One cigarette had burned down to the filter leaving a perfect ash snake.

With broom in hand, Chloe began the arduous task of cleaning. Startled, she turned around at the brisk sound of a voice.

“Everyone calls me Momma Baccacio.”

“Yes, nice to meet you. I haven’t quite moved in and still have a lot of cleaning to do.”

“I brought-a you some spaghetti. Homemade from scratch-a.” Rotund Momma Baccacio wore a red dress emblazoned with bright yellow Hawaiian flowers. The top button had burst off, unable to contain her bust, but her taut apron held everything in. She looked around for a table and moved the hot plate down on the potter’s wheel.

“You no gotta furniture?”

Chloe smiled. “It’ll be here tomorrow. I don’t have much, but it’s all I need.”

“Momma got an idea. You take a break-a and come over to my place. You eat there, we talk-a some, and you come back and clean. What-a you think, piccolo uccello?”

“Oh, it sounds great. Thank you so much!”

Mrs. Baccacio left her door open, which told Chloe she lived in a safe building. Her apartment, warmed from the oven, prominently displayed pictures of Jesus and Mary between beside candles and crucifixes.

“Sit down so you can eat. You no wanna cold-a spaghetts.”

Mrs. Baccacio robotically brought down a wine glass from the cabinet and poured a dark red wine. She tore off a large piece of bread from a baguette and pulled her chair up close to Chloe so she could watch her eat. Every time Chloe put food in her mouth Mrs. Baccacio’s head bobbed up and down, expecting rave reviews, which Chloe graciously gave.

“So, tell me about the former renter. Why did he leave his kiln and wheel? Too heavy to move out? Too much trouble?”

“Oh, piccolo uccello, you will have to decide. He was a well-known potter and sculptor in Soho. Name was-a Harold Sumners. Putta more red-sauce on your bread. His new creations were on display at Madame Rose Chapeau’s Art Gallery and always sold the same day. As I understand it, Madame Rose put pressure on Harold to do a-better and a-bigger. Always a-better and a-bigger. Even though they were—as you might call it—how you say—bedfellows.”

Chloe felt so full her eyes were floating. She watched Mrs. Baccacio take off her blue bandana. Her copious gray hair, intermingled with black strands that refused to grow old, flowed down her back.

“It’s delicious, but I’m going to burst if I eat more,” laughed Chloe.

“If I have anymore, I won’t want to clean. Thank you for being so gracious, Momma Baccacio. By the way, why do you call me piccolo uccello?”

“Okay, I’ll have another half-glass of your glorious wine, and you tell me what happened to Harold,” said Chloe.

Mrs. Baccacio jumped up, returned with a new bottle from her wine rack, and poured a half a glass of red wine for Chloe. She poured herself a glass, sat down and leaned into Chloe.

“The way I heard it, and it comes-a from a reliable source, Harold was stressed out. He couldn’t please-a Madame Rose. Her most famous gallery auction set for the next-a month included buyers from all over the world. She felt her reputation was-a on the line, and depended on Harold to come up with a most spectacular sculpture.”

Chloe took another sip of her wine.

“I will tell you that my nephew’s son is best-a friends with the delivery guy, and he got a call with instructions to pick up a sculpture from inside Harold’s kiln at 10:00 p.m. two days before the auction and deliver it to Madame Rose’s.”

“What’dya mean, ‘and’? He did! No one was at Harold’s apartment, and no one has seen Harold since. It was a life-sized sculpture of himself. Nude! In a fetal position. I was told by a reliable source that it was the most beautiful sculpture ever seen. So life-a-like, and the coloring in the clay was like none ever seen before.”

“Was it auctioned off?”

“Yes. The bid started at one million and everyone bid on it, up to five million dollars!”

“Yes, of course I do. My niece’s boyfriend’s a-sister cleans Madame Rose’s gallery and dusts the sculpture every night.” 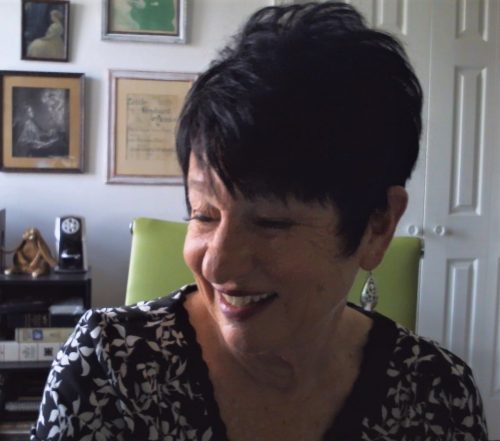 Cheree Mann, the eldest of four children, was born in Tucson, Arizona. Her husband, children and grandchildren are the apples of her eye. In addition to writing fiction, she plays the piano, paints with acrylics, and has a wheel and kiln for her clay. She owns two Great Pyrenees, a West Highland Terrier and a Miniature Schnauzer. Cheree is retired from education and Federal employment.