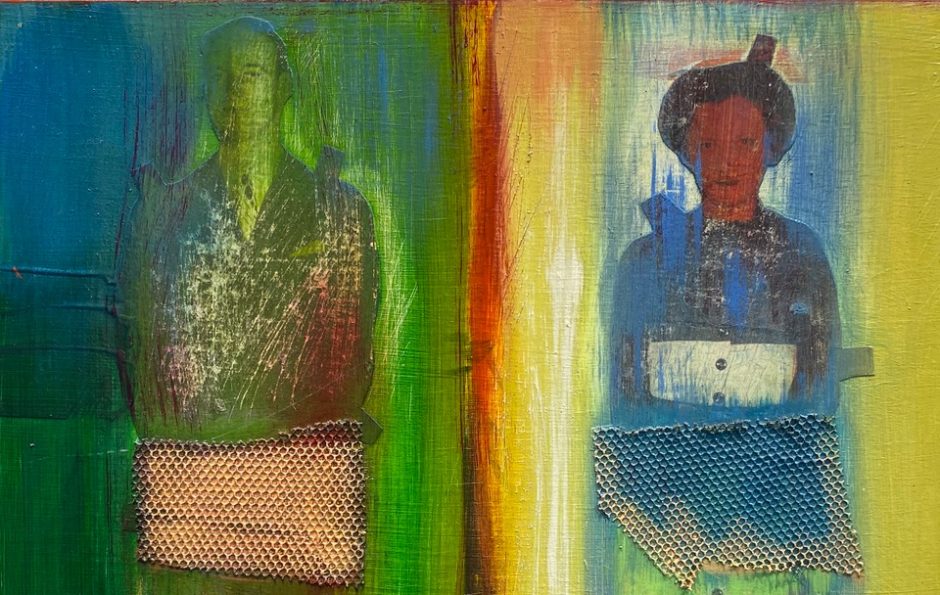 It was the architect and the gun moll who captured my attention. The party was a casual industry event held in the Hollywood Hills at the home of a producer, one in fact who had bankrolled a film I’d worked on once, though all my ideas for it were rejected in favor of chase scenes and revenge murders. I was a screenwriter who had yet to see any credits on screen. I hadn’t worked for over a year and needed to hustle a project, any project, very soon.

I was out of sorts when I arrived since my wife Jen announced at the last minute that she needed some quiet ‘me-time’ that evening. She did, however, take time to dress me for the affair. Tight black jeans that were squeezing my balls. A fifty-dollar T-shirt a size too small that cut into my underarms. A tailored green cashmere sport coat that made me look like a string bean.

I’d been invited through a friend of a friend of a colleague, someone I’d never met but hoped to identify so I wouldn’t be standing alone in a corner with a drink in my hand. Not that I hadn’t a great deal of experience feeling isolated at industry events, but it never ceased to be awkward just the same.

I meandered through the producer’s gargantuan digs, one of those steroidal glass and multi-level affairs, passing insiders making deals and players going through their various mating rituals. The guest bedrooms and bathrooms (there must have been a dozen of each) were filling up like Noah’s Ark. I recognized a couple of B-list, or let’s be honest, C-list actors, surrounded by the usual hangers-on. I thought I recognized a writer I’d spent long hours with, lobbing lines across a walnut table. No such luck. He turned out to be a makeup artist on the make.

I’d almost given up finding someone simpatico when I spotted them standing together, whispering in one another’s ears. I assumed they were a couple despite their extreme contrast in style. They weren’t flirting or looking as if they were trying to impress one another, but maintained an easy alliance while exchanging comments and nodding their heads knowingly. Given his brown tweed jacket, with elbow patches no less, I took him for an academic or possibly an architect. The woman was a striking blonde with an affirmative, almost aggressive stance. She was poured into a sleek, tight white sheath, reminding me of certain durable female stars from the 1930s—Stanwyck, Harlow, Davis, Crawford. I’m always creating film characters in my head, so I mentally named her “the gun moll.”

I grabbed a second drink from a passing waiter, made eye contact and sidled up to them to introduce myself: “Hello, I’m Boyce Johnson.”

The man’s handshake was firm but non-threatening. “Carter Spencer.”

The gun moll’s grip was surprisingly strong and assured, a woman trying to make herself remembered. “I’m Lauren.” Neither of them wore wedding rings.

“I wondered if you were an architect,” I said, avoiding gaping at his baggy sport coat.

He opened his mouth to reply, but Lauren interrupted. “As a matter of fact, Carter designed this house.”

“I’m impressed. It’s quite the place.”

She gazed directly into my eyes. “Are you in the industry?” Her lips were painted a deep red, almost purple. I realized that she was a bottle blonde which only burnished her retro-attractiveness.

“I’m a screenwriter.” I’d long ago given up telling people that I was working on a novel, a tired cliché. “Currently between projects.”

“I’m exploring my options while taking care of our daughter. My wife is an attorney.”

Lauren glanced at Spencer warily. “What kind of an attorney?”

She laughed. “I like your modesty, a rare attribute in this town.”

“Don’t get me wrong. I’ve worked on a number of films, the last one bankrolled by our host. It grossed $300 million before global distribution.” It had been a sequel to a sequel which was being followed by another sequel.

“As a matter of fact, Lauren and I are looking for a writer,” declared Spencer. “We’ve secured financing—”

“For a documentary,” interrupted Lauren. “A project—” she hesitated as if consulting Spencer “—on mid-century architecture in LA.”

The party’s increasingly raucous activity swirled around us and her companion eagerly broke in. “You know, Neutra’s house in Silver Lake, Wright’s Hollyhock House, Schindler’s studio in West Hollywood. Jock Peters’ interior for the old Bullocks department store on Wilshire.”

Lauren arched her eyebrows. “Maybe not the kind of thing you like to work on?”

A documentary could be just the thing to pull me out of my creative doldrums, or at least help pay the mortgage. Jen had been paying our bills for months.

My only experience with architecture had been some construction work between college semesters one summer. I was fired for being a “pussy.” Too weak to toss sixty-pound bags of concrete material off a truck. Bumping into other workers while carrying lumber. Climbing the scaffolding too slowly and using too many strokes to hammer nails.

“Architecture is one of my passions,” I said, finishing off my drink.

“Then you’re just the man we’ve been searching for,” purred Lauren. She moved in closer, enveloping me with the woodsy scent of her perfume. I couldn’t take my eyes off her wide, full, sensuous lips. They seemed to have a life of their own, communicating even when she wasn’t speaking.

Spencer gazed at her conspiratorially. “Lauren wears the pants in the family, so whatever she says, goes.” I decided that I didn’t like him. I suppose I was jealous that he had ravaged those full lips with his own thin ones.

Lauren gave me a sideways look that I took for a seductive pass. “Let’s drink to our project,” We ambushed a waiter for champagne and raised our glasses while glimpsing at one another through the rims. Lauren gave me an enticing smile. I involuntarily licked my lips and felt my pants tightening at my groin. I loved Jen, certainly believed that I did, but there’s nothing like a few drinks at a party in the Hills to tug at the libido.

I offered Lauren my card, hoping my 818- area code in the Valley wouldn’t put her off. She promised that we’d get together soon. They would call me. As they dashed to the door, I saw our host approaching. A corpulent man with an asymmetric haircut, sidled up to me.

“I’ve seen you on the lot.” It wasn’t screen credit but at least he recognized me. “I trust you’re enjoying my little party.”

“Yes. Your house is amazing. I just met the architect.” The words flew out of my mouth.

He emitted a throaty, gin-infused guffaw. “They’re professional party crashers. He sells cars. She works at the Lingerie House in the Beverly Center. They saw me coming. That’s why they left in a hurry.”

My mouth must have dropped.

“Don’t take it personally. Everyone in Hollywood lies.”

I couldn’t argue. I lied too, on that night and plenty of other times. To impress. To get work. To get laid. We were all pretenders of one sort or another in this town, everyone concocting fictions in our ambition to make good.

Driving home, I began to formulate a screenplay that might finally get me those credits. A noir thriller that takes place in the 1950s. Two grifters—he’s a writer, she’s a gun moll—discover the body of an architect murdered at a Hollywood hilltop estate. Implicated in the crime, they’re forced to go on the run and she turns to him for comfort.

A note from the author: Illustrator Katheryn Holt’s family member was a founding partner of Bullocks, which is referred to in the story, and her father was a tv/ film writer in Hollywood.

About William: “My short stories have appeared before in The Fictional Café, as well as in the Bryant Literary Review, ImageOutWrite Volumes 5 & 6, Main Street Rag, Miracle Monocle, Sun Star Quarterly, Burningword Literary Journal, The MetaWorker, Chelsea Station, Arlington Literary Journal, Wildroot and  HOME: An Anthology, from Flexible Press. I live in the San Francisco area where I work as an art curator.”