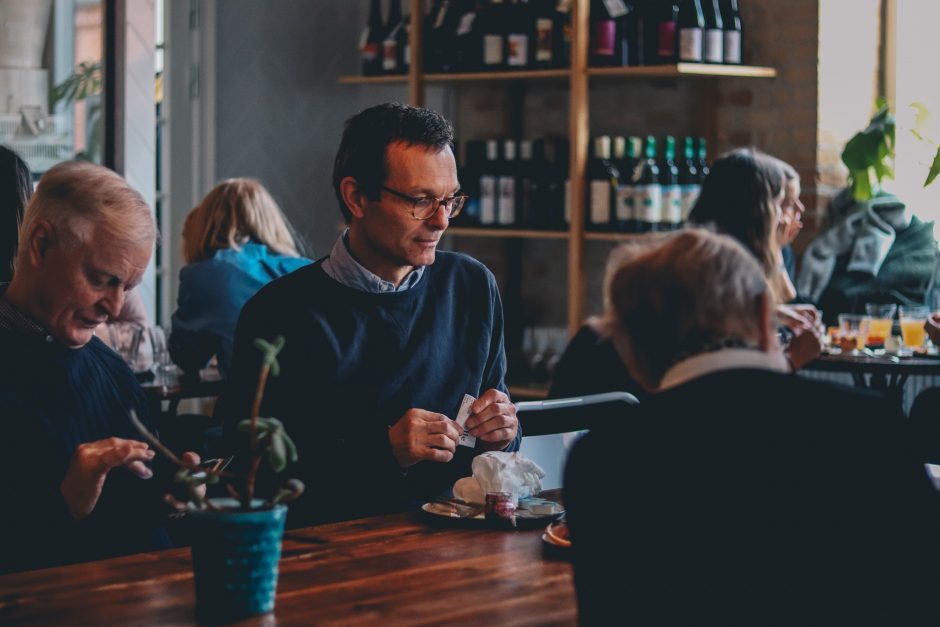 While sitting in a Starbucks on Mission Street, I met a splendid pimp. The breakfast crowd had dispersed when he ambled into the restaurant, and he gave me a friendly nod before sitting down at the table beside me. He was a towering man with a heavy, black beard and menacing scar on his cheek, but his eyes were as kind as a minister’s and softer than poached eggs. “Good morning,” he said, his voice as smooth as butter. He was toting a leather briefcase, which he placed upon the floor, and he gazed at me like a spaniel hoping to gobble a tidbit.

“Have you tried the strudel?” he asked me. “All my girls love the strudel. I assure you it’s the finest in all of San Francisco.”

Having already sampled the nut bread, I was about to leave the restaurant, but the fellow seemed so amiable that I chose to stay and chat.

He was gazing at me so warmly that I felt neither shock nor distrust. But I wasn’t sure just how to reply to what sounded like a confession. “I take it you have no daughters,” I muttered tonelessly.

He waved at a passing waitress, catching her attention. “Two strudels,” he said. “My friend here will join me.”

Removing a cell phone from his briefcase, he read some messages. Afterward, he muted the ringer and tucked the phone into his pocket. “I manage twelve girls,” he said. “They are such a lot of work. But my guilt would be unbearable if I walked away from them.”

“Maybe they’d be better off,” I suggested.

“How I wish that was true,” he replied. “But that would only happen if I were a terrible pimp.”

I said, “I don’t care for prostitutes. Not even well-managed ones.”

He chuckled. “I’m aware of that, sir. I’ve been in this business for thirty years. I know how to spot a john.”

“So what do you want from me?”

He reached over and patted my wrist. “Sharing my burden with strangers refreshes me, my friend. That and reading the Bible, I try hard to be worthy of it.”

When the waitress returned with two plates of strudel, setting them down on our table, he sighed like a kettle, fished into his pocket, and gave her a twenty-dollar bill. He seemed to be disappointed that strudel didn’t cost more.

I said, “For a pimp, you sound very conflicted.”

He took a large bite of his strudel and wiped a crumb from his lip. He said, “I long to give it up—I’m so tired of being a pimp. But I tremble to think what would become of my girls if I lay my burden down.”

“Could they keep the money they earn?” I asked.

He said, “That would be a disaster—they would only spend it on crack. That’s why I pocket their earnings and give them my heart instead.”

“Isn’t that rather presumptuous?”

He shrugged. “Their families want nothing to do with them, they cannot hang onto their boyfriends. And so it falls to a pimp to meet all their emotional needs.”

“That’s a pretty big burden for pimps,” I said.

He replied, “It’s a cross I must bear. If left on their own, my girls would be helpless—the streets would eat them alive.” He plucked a napkin from a dispenser and blotted his sweat-beaded brow. “No, I could never forgive myself if I ever abandoned my girls.”

“What makes you such a wonderful pimp?”

“I always put my girls first. I buy them the best of contraceptives, so they won’t pick up a disease. I have a doctor check them out three times every month. My door is always open to them whenever they have a problem. Oh, the stories they tell me, but I listen to them like a priest.”

“You let them screw strangers,” I blurted.

“They would do that anyway.”

“You make money off their bodies.”

I did not wish to savor the novelty of sympathizing with a pimp—not even a pimp as articulate as this one appeared to be. I pushed my strudel away from me and told him I had to go.

“Finish your strudel first,” he begged. “I assure you it’s very good.”

“You’ve told me more than I need to hear.”

“But you haven’t heard half of it, sir. Every Christmas and Easter, I throw my girls a party. Once a month, I take them for a drive along the coast. And, oh how they love the movies, we go every Monday night. I treat them to buckets of popcorn and all the soda they can drink.”

“How can you say you buy them treats when they provide the money?”

He looked at me with wounded eyes then spoke as though I had slugged him. “How can you ask such a question?” he said. “Do you know that I’m the most sought-after pimp in all of San Francisco? Do you know that hundreds of girls have begged me to take them into my fold? But twelve girls are all I can manage if I am to do my darlings justice. Although it breaks my heart, I turn many girls away.”

“Have any of them ever left you?” I asked.

He smiled. “That happened just once. Since you haven’t finished your strudel, would you like to hear the story? The story will surely convince you that I am the finest of pimps.

“Her name was Judy, and she was a beautiful but very headstrong girl. She had only been turning tricks for a month, and she had so much to learn. One day, she called me a bloodsucker and said she would not work for popcorn. She insisted I give back the money she’d earned, and she said she was leaving me. Well, I paid her back every penny she’d earned and a hundred dollars more. I said she had my blessing, even though she had spoken to me so unkindly. I told her the streets were too perilous for a girl to work on her own.

“Three months later, I spotted her at the corner of Turk Street and Polk. Her arms were littered with track marks, her eyes were darting like lizards, and her nose had been broken so many times that much of her beauty was gone. I insisted she tell me what happened to her, and she wept as she poured out her heart. She told me how she’d been beaten, she told me how she’d been raped, she said she lived in fear for her life every day she was on the street.

“Well, I gave the foolish girl a hug, and I kissed away her tears. When I agreed to take her back again, she cried like a newborn child. I bought her a satin evening gown to replace the rags she was wearing, and I took her on a dinner cruise to celebrate her return to the flock. The other girls were angry when I told them I’d booked her a cruise. ‘Why should she get a cruise?’ they cried. ‘She treated you like a pig.’ I told them not to be angry, I told them instead to rejoice. ‘Your sister was lost and now is found’—that’s what I said to them.”

“Your kindness sounds plagiaristic,” I said.

“Is that such a bad thing, my friend? Would you rather I scorned the Gospels and left her to die on the streets? Sir, I’m not that kind of man.”

“Please finish your strudel,” he said. “I have a favor to ask of you.” He opened up his briefcase and removed a ream of fliers. “If you would pass out just a few of them, I will be your servant too.”

Up to that moment, the fellow’s delusions had struck me as insular—the haven of a complacent crook sentimentalizing his crimes. But the content of the fliers suggested his fantasies had no such bounds. He was unapologetically running for city councilman.

“My friend,” he replied. “Why would I kid about this?”

“No, my friend, I am more like a seed that has fallen on thorn and rock. If cast upon fertile soil, where the sun will not shrink my roots, I will produce a bounty a hundred times greater than what I am yielding today. Think of it, sir, all the whores in the city will fall under my protection. They will get the best of medical care, they will live in safety and ease, the police will no longer throw them in vans and haul them off to jail.”

“Why do you question me, sir? Do you think I lack pity because I’m a pimp? Do you find me insincere? Do you doubt that I love my girls like Jesus loved Mary Magdalene? You said you don’t care for prostitutes. Be glad that somebody does.”

Pushing his chair back, he shook my hand. His grip was like that of a python.

He said, “You’re a very good listener, my friend. You have lightened my load a great deal. You could ease it a little bit more if you pass out a few of those fliers.”

Not knowing how else to get rid of him, I told him to leave the fliers. I had no intention of passing them out, but I did not wish to deride him further. If this sanctimonious man was a fool, he was clearly his own fool, not mine.

“Thank you,” he said. “There’s so much to get done. But finish your strudel first.”

As he walked out of the restaurant, I looked at the stack of fliers. Selecting one, I folded it up and tucked it into my pocket. I had to admit that I had just met a very splendid pimp.

James Hanna recently retired from the San Francisco Probation Department where he was assigned to a domestic violence and stalking unit. He has had over sixty story publications and three Pushcart nominations. James’ books, all of which have received awards, are available on Amazon. This is his first piece on the Fictional Café.