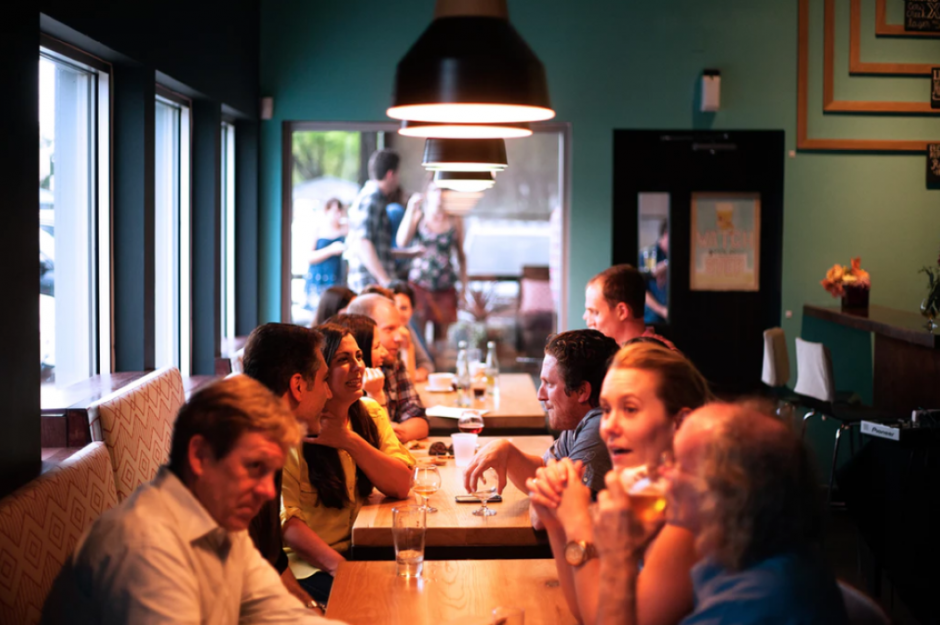 When they are together, her nose turns up automatically at everything he says, her head turning to observe passersby or leaves quavering on a tree, incidentals, he, the point from which she departs to engage in everything. This is how it almost always is.

He has no idea, even while cultivating his fevered impulse to draw her in, make her look into his eyes, respond to the hand holding hers as he inquires what she would like to eat and drink—life’s menu, always at her disposal, proffered by him.

His drone of words tickles their fecundity. Everything so green. He has never seen her more beautiful, wearing the ring he gave her, a diamond perhaps too large. But what is love, if not extravagant?

She demurs at his suggestion for the wine, then lets him choose her appetizer and entrée. This makes him smile. He knows her, and she, in turn, appreciates being able to settle into the cushion of the life he is creating for her with such dexterity and ease. From time to time, she observes the meticulous hands, sure and precise slicing, raising up modest bites, and his eyelashes, so long and graceful, highlighting his pale demeanor.

It has occurred to her he is too beautiful. Even in bed, his considerations sometimes set her aback. She has never known a man so eager to wait, so generous and vast in his longing. With him, from the beginning, there was an interior sigh, a knowing of the kindness waiting, an awareness she would always be sated.

Even so, she sighs at the extraordinary overhanging foliage, the beauty of those nearby also dining, the perfection of their meal arriving in stages on plates, brilliantly white, reflecting all the surrounding splendor. Sighs at him across from her, neat in his Brooks Brothers suit and horizontally striped tie, his white shirt competing with the immaculate table cloth. “Is it all right,” he inquires after they have toasted and drunk and he has poured yet more into her glass.

“It’s quite good,” aware of the rarity and cost of the spiced delicacy passing down, aware too of her bare shoulders on this night serving as a kind of beacon–for the gentleman over there, smoking a cigar, for example. His wife or mistress has left the table and he gazes at her, boldly removing her dress with amber eyes so she can feel it. She takes another sip of wine, trying to still her trembling hand as she tips the large glass to her mouth.

When the woman returns, a brunette, only slightly older than her, wearing an expensive bracelet and matching necklace, he turns to her and says something, then touches the napkin on his lap to one corner of his mouth and abandons it on his seat. As he heads towards them, his eyes fix on her, one hand running slowly through his gray hair.

THE TROUBLE WITH SISTERS

My sister called me dying of embarrassment. Apparently, her landlord had a plumber working in the basement, unscrewing the pipes that led to her kitchen sink as there was low water pressure. When she went downstairs to greet her date, the foulest odor greeted her.

“What is that, John,” she called down to her landlord just as she opened the door to greet her date.

“Vomit. The pipes are full of it.”

“’You’re turning so red,’ he says to me,” Janelle said, referring to her date. “I might as well have worn a sign–bulimic here.”

“I thought you were over that shit. You were bulimic when you were 12,” I said.

“You won’t be saying that to me from the hospital bed when your insides stop functioning.”

“So what’s the problem.”

“I was humiliated, that’s all.”

“So now your landlord knows, and your date—what’s his name?—“

“He’s transitioning. His name is Jackson now. I don’t know why I said Jennifer. That’s just his birth name.”

“OK, so Jackson knows too. And you’re handling it, apparently.”

“Well, yeah, but it was soo embarrassing.”

“Not embarrassing enough for you to stop, I guess. Have—you—stopped?”

“Humiliation did the trick, huh.”

“Thanks. I was calling you for sympathy.”

“I’m sorry. Really. Pretty soon you’ll get used to not throwing up after you eat. Who throws up in the sink anyway?”

“I do/did. It’s quicker than running to the bathroom. Anyway, it’s not throwing up, it’s regurgitating.”

“Never mind. Sorry, I asked. So, congratulations. Can I congratulate you on getting over being bulimic, for now?”

“I look like a cow. Keeping all my food down is turning me into a cow. Stop laughing. I can tell you are.”

“So what’s the problem?”

“What if we break up? I’ll be a fat girl without a boyfriend.”

“Oh my god. You are not there yet, Janelle.”

“But that’s all I think about.”

“Do you believe him when he tells you he likes big women?”

“I swear to god, Janelle—what—then—is—the problem?”

“Oh-my-god. I’m hanging up now. There’s someone at the door.”

“Across the street for a pint of Ben & Jerry’s. I just have about five more pounds I need to put on.”

Down the street, the salty rainy street of yesterday where all the better days are, the better than today days, and even tomorrows, down that street is where you find her posed under a streetlight, not trying to be Lady Day or whatever but still with a flower in her hair. Her sideways glance lets you know she is what you have been waiting for.

You’ve been trying to get away from yourself, not caring about much, and here she is, she who knows where you’ve been, having been lost herself.

Her bright eyes see through you, enticing and alarming at once so when she holds out a cigarette, head tilting a little as if listening, you ignite its tip, your hand trembling a little. Breeze flutters the hem of her pale dress, which brushes your pants’ leg, and after lighting up yourself, you stroll with her to the sidewalk corner, neither of you speaking as light rain begins to fall coating her bare arms with a sheen, pressing on the brim of your fedora like a cotton hand. Then she tells you her name—Lola.

“There’s a club that way. Would you like to have a drink with me—Lola.”

Night goes down with you into the basement bar, nestling against its brick walls, circling coolly around seats and tables. On the small stage, a curly-haired youth plays bass, eyes fixed far away. A mustachioed drummer marches his sticks precisely and briskly across a set of drumheads. The pianist, his glasses foggy with smoke from a dangling cigarette, hunches over the keyboard, shoulders on a slant like he’s afraid or on edge, delivering flawlessly.

The room expands with smoke. By the time your seltzer on the rocks and her wine cooler arrive all the tables are filled and the band amps up competing with the din of voices.

You smile a little at her, noting her half-closed eyes, always a good sign—someone who listens inside instead of fixating on the stand. This time, you make a show of lighting her up, as if your extended lighter had the power to ignite her tenderness. Her right hand encircles yours, telling you how it is, nothing beyond now, so stay if you will, or go.

When the trio breaks and everyone around you keeps talking, all you want is to remain in your mood letting smoke spill your truth, speak for you as if it alone could tell your story, open the door to some kinder place, even imagined, where hope lingers in spite of you.

There was a wife once and a little girl when you were on top of the world. Now you are an anomaly, a sober ad guy writing copy for an agency that keeps you on, long as you stay off the stuff, the reputation of a drunk who trashed his office the night his family left him having preceded you.

What keeps you going is not what happened then but what may come still. In the hotel room where flashing neon is the only constant, you scratch out tunes in a little brown book you tuck afterward next to a Bible in a nightstand drawer, sometimes imagining the accompanying music. Even though you can’t write music, the melodies still come to you.

You ask what she does for a living as if this was required, a rule by which to abide because really all you want is to hear music.

“I type during the day. And sing from time to time.” Her head motions towards the musicians. “What do you do, Max?”

“Any songs you recall?” When the waiter leaves, you lean toward her, reciting the words to the tune you can’t set down:

Don’t you know I’m that fool who

Left all he had for a better you

And here I am

Nowhere else to go but still I

Dream of you and

Whisper in your ear

Of sunny days in yesteryear

When life was grand

“That’s nice. Again.” Her contralto adds sexy, silky variations, and you find yourself nodding at her as you both nodded before at the musicians.

When the trio returns, Lola identifies each one. Their familiar names will stay with you longer than she or even the dream you invent for her, nestling along with favorite tunes in the cracks of bricks surrounding you like beautiful secrets.

I saw my friend Alma, a gorgeous Latina who had kind of disappeared from our circle since getting married a few years back. We were at the IGA.

“I’m fine. Seeing someone new. Two months. We’ll see. Last time I saw you, you were pregnant with this guy.” I nodded toward the plump kid of about five with spiked hair busy feeling up Snickers bars beside his mother, opposite the check out counter.

“Oh. I’m sorry. So sorry. It must be the angle. I could have sworn you said”–

“No worries. I have packed on about 20 pounds since I gave birth to this one. Fifteen hours in labor. That’s it for me. Done. And done. Not worth it.”

“Well, it’s great to see you, Alma. Stay in touch. Let me know if you and—what’s your husband’s name again?”

“Maybe you and Max want to join us on poker night. We go pretty heavy on the Cosmos too.”

“Haha. Sweet dreams on that one. He’s never home. I’ll go solo though.”

“Great. Come as you are. You have my number.”

“I look forward to it. We can pretend to be single again.”

Arya-Francesca Jenkins is a Colombian-American whose poetry, fiction, and creative nonfiction have been published in journals and zines such as Across the Margins, Anti-Heroin Chic, Black Scat Review, Brilliant Corners, The Feminist Wire, Front Porch Review, KYSO Flash, The Matador Review, Metafore Literary Magazine, Mojave Literary Review, Vol. 1 Sunday Stories Series, and Provincetown Arts Magazine. Her fiction was nominated for a Pushcart Prize in 2017 and garnered three nominations in 2018. Flash is forthcoming in Cleaver Magazine. Her poetry chapbooks are: JEWEL FIRE (AllBook Books, 2011) and SILENCE HAS A NAME (Finishing Line Press, 2016). Her short story collection BLUE SONGS IN AN OPEN KEY (Fomite, 2018) is available here: www.aryafjenkins.com.

Previous postEllen Rachlin: Poems of Survival
Previous post” To Whom It May Concern” A Short Story by Claire Sartin