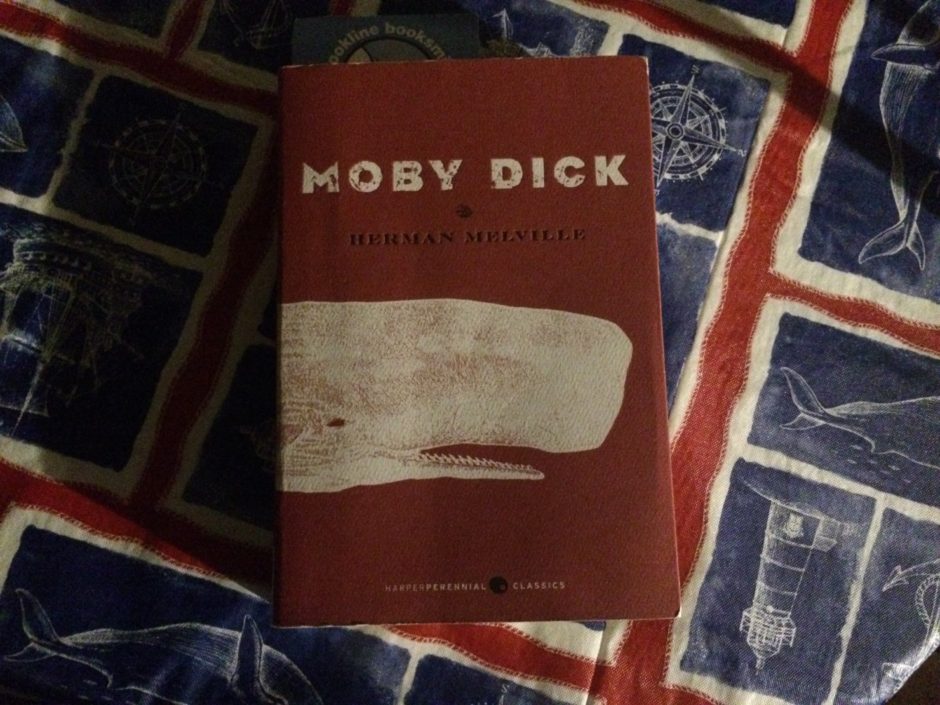 It all started with a little getaway in March. My girlfriend and I had booked a cruise and, in anticipation, I was gathering books to bring along. Those of you who are book nerds can attest to the anxiety of trying to pick out just a few books to take in your luggage. I was weighing my options, no pun intended, when I came across Moby Dick, that hefty tome of classic American literature which had eluded my syllabi in both high school and college. Now as an “adult,” I thought it was time to give it a read. When I told my girlfriend of my choice, she sort of looked at me sideways, then said that’s a bold choice for a vacation read, especially one where we will be spending a week at sea.

Unwittingly, she’d tapped into my great anxiety about being out in the open ocean, where my logical mind thought humankind ought to avoid. Just going on this trip was pretty adventurous for me; why did I need to do the equivalent of reading ghost stories in a graveyard? I decided not to tempt fate, and the book remained unread on my bookshelf at home.

It happened that the cruise left port on my birthday and as we tossed lines, I opened one of my gifts: a belt dotted with tiny whales. 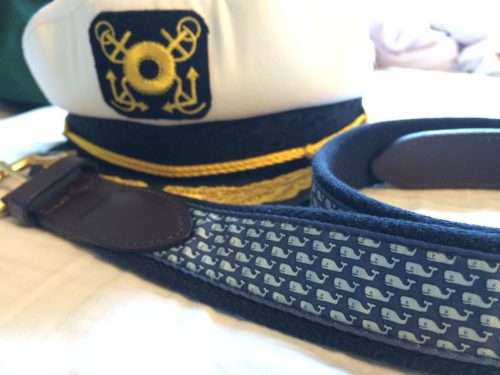 Was this Moby Dick taunting me from ashore, reminding me, like a jilted lover, of the day I left it behind in favor of a new love, Ms. Kindle? I shrugged it off and tried to enjoy my belt and cruise in peace, but a kernel of regret and unease remained. 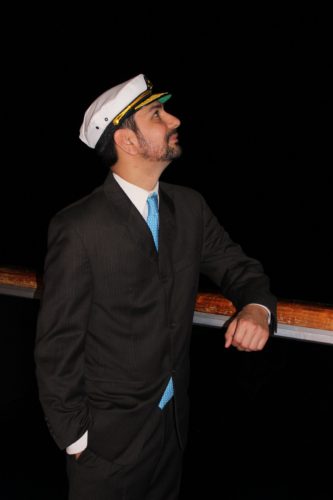 Fast forward to our next out-of-state trip: to Portland Maine for a friend’s wedding. We were strolling down the narrow, cobbled streets of the Old Port late one night when I happened to look in a shop window to see this: 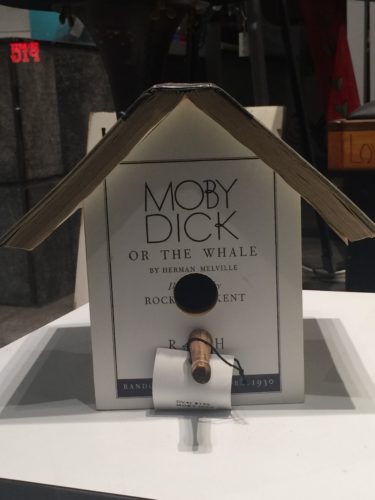 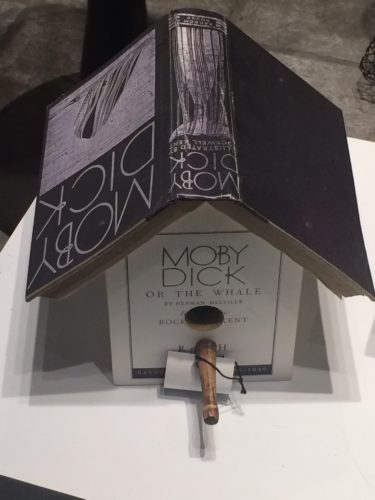 It seems the whale had followed me from the Gulf of Mexico all the way to the Gulf of Maine! I merely laughed and pointed it out to my girlfriend, as I snapped the photo, trying to hide that eerie feeling that twisted away at the knot in my stomach.

The next morning, she asked me what I wanted to do that day. I told her a story about how I’d been touring Portland breweries a while back with some friends and we had stumbled upon a tiny distillery next to one of the stops. A few of us wandered in and were instantly handed samples of whiskey, gin and rum by one of the jovial owners. We all tossed back our drinks and had a few laughs. In all of our mirth (and hurry to get to the next brewery) we rushed out before I realized that I really really liked one of the rums. I had made it my mission since that day to track down this rum and bring it home with me. 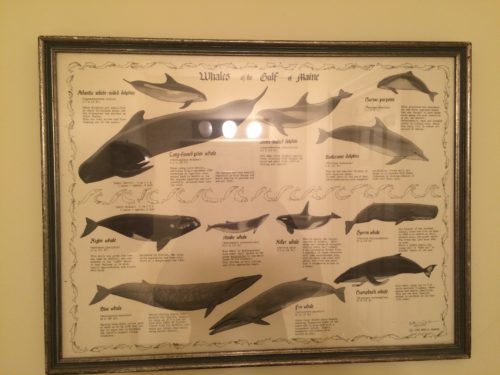 A photo I took from that brewery tour trip, eerily prescient…

After telling her this story, she said emphatically, “We have to find that rum!” We did some detective work to find the name of the brewery and then discovered the name of the distillery: Maine Craft Distilling. Within the hour, we were standing in that same old spot, being handed samples of their craft liquor. I mentioned to our server that I’d tasted this amazing rum last time I was there but couldn’t remember what it was called. He asked me if it was spiced or white rum. I said spiced. He smiled and said, “Yes, that’s one of our bestsellers, the Queequeg rum!” I did a double take. Queequeg? I couldn’t believe I’d been chasing a Moby Dick-inspired spirit all this time! The server went on, “Unfortunately, we’re all out now, but we should have a new batch next week.” 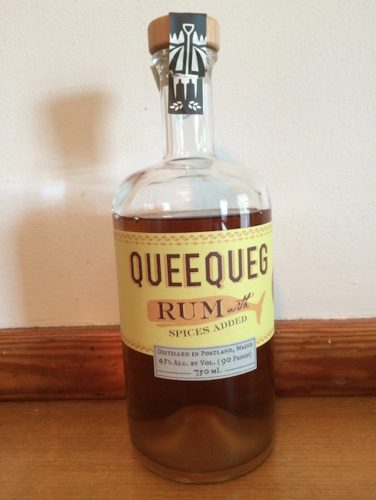 My face was red hot. Of course they were all out. The whale wouldn’t let me win that easily. “Okay, I got the message!” I yelled in my head. “I’ll read the book as soon as I get home!” He offered me the Tashtego rum (yet another reference to the book), but it nowhere near as good (or maybe it was just the bitter taste in my mouth). We thanked him for his time and went on our way. 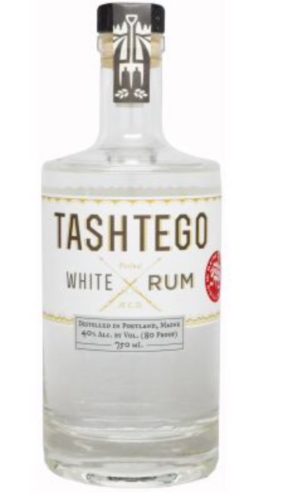 I’d been home for two days, forgetting completely about the book as it sat in front of me on my bookshelf while I worked. A friend had sent me a manuscript to read and I was about ten chapters in when it happened.

The main character was taking an English class and was paired with a girl to give a presentation on a book of their choice. He wanted to impress her but was unsure what book to suggest. Later, as he read through the titles in the classics section of the bookstore, a wicked smile came across his face as he saw Moby Dick and thought of his professor’s prosthetic leg. Naturally, the character chose that book, which even HE admits, he’d never read and even proceeds to neglect starting it much like me. A cold shiver crept up my spine at this unnatural parallel. I glanced over at my book shelf, spying my own copy of Moby Dick, untouched, unmoved since the day of my embarkation for my voyage.

I lept up out of my chair. “Leave me be, whale!” I exclaimed. “I do you no harm. Why must I be subjected to such harassment!” I walked to the bookshelf, a bit shakily I must admit, pulled the book out and set it on the table by my bed, hoping that this physical, tangible move would appease the whale and arrest the haunting.

It worked. The following days brought no further whale sightings and I felt the weight of those hefty eyes lifted from my being. I was sinking in work that week, frantically flailing my arms to keep afloat. My inbox was overflowing to the point where I got a warning about just how full it was (I didn’t even know that could happen…). I resolved to sift through the millions of messages, baleen-like, to find the high-priority gems that needed seeing to that day.

You can imagine my shock when I opened an email from my local bookstore and favorite place for readings, Papercuts J.P., to see this event entitled “High Seas:” 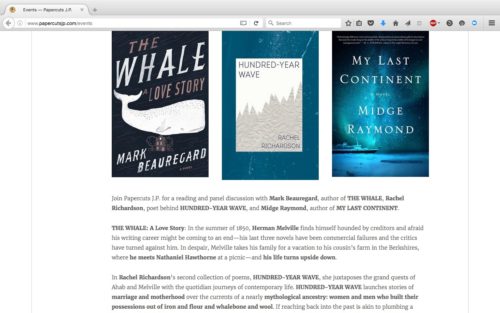 The color drained from my face until I looked like the visage of the great fish itself! My hands trembled as I scrolled through the message, keenly aware of Melville’s magnum opus in my peripheral vision, staring at me, taunting me with its unopened pages.

But I had no time to read as my work had all but swallowed me whole that day. The following evening was the reading (yes, I just happened to open that email at the exact right time). I attended in earnest, curious what all these authors had to say about the whale and the open seas.

The proprietors of the establishment, Kate and Katie, had set up a table with wine called “The Whale” as well as a bowl of Goldfish to set the mood. I was filled with manic energy as I listened to each author preface their reading with a little story about their personal relationship with Moby Dick. I must admit, listening to them talk about this classic novel made me itch to read it, and then subsequently, read their books to see the influence. But that’s a song for another time. 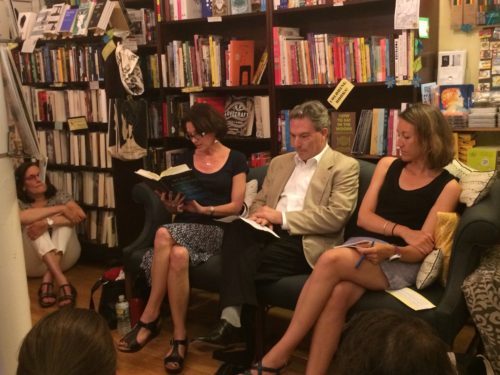 As the reading came to a close, I shuffled out the door, trying dearly to contain my apprehension, fearing the whale would follow me home somehow, somehow…

I rushed home to start this tale, hoping that sharing how I came to acquire this torturous tail, shadowing my every move, might mitigate its hold on me. “A tribute of sorts, yes, that will do the trick,” I thought. I tapped the keys frantically by the glow of candlelight until the midnight oil had all but burned away. The monomania possessed me as I tried helplessly to influence the Fates and force the whale to relinquish its grasp on my soul.

Editor’s Note: But that wasn’t the end. I was a day late in writing this, so of course the whale reminded me of its presence. I noticed something I’d never seen before. 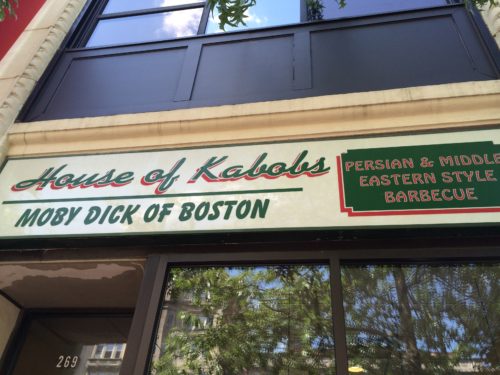 This is a Persian diner, conveniently located across the street from my gym’s treadmill window. Alas, it may be time for a new gym…

Update: I was a week late in posting this, as it sat finished but unpublished on my computer. Tonight, the whale struck again on my Cape Cod vacation. Whilst walking through the shops I was greeted with this Saturday night buzz kill: 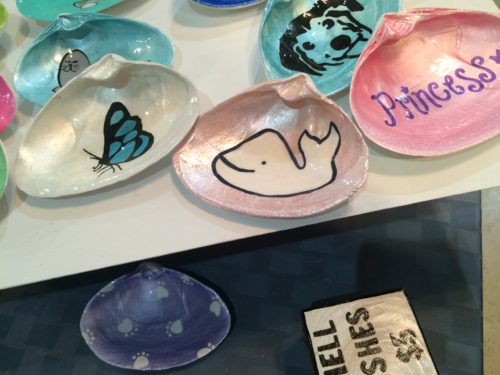 When will it end?!