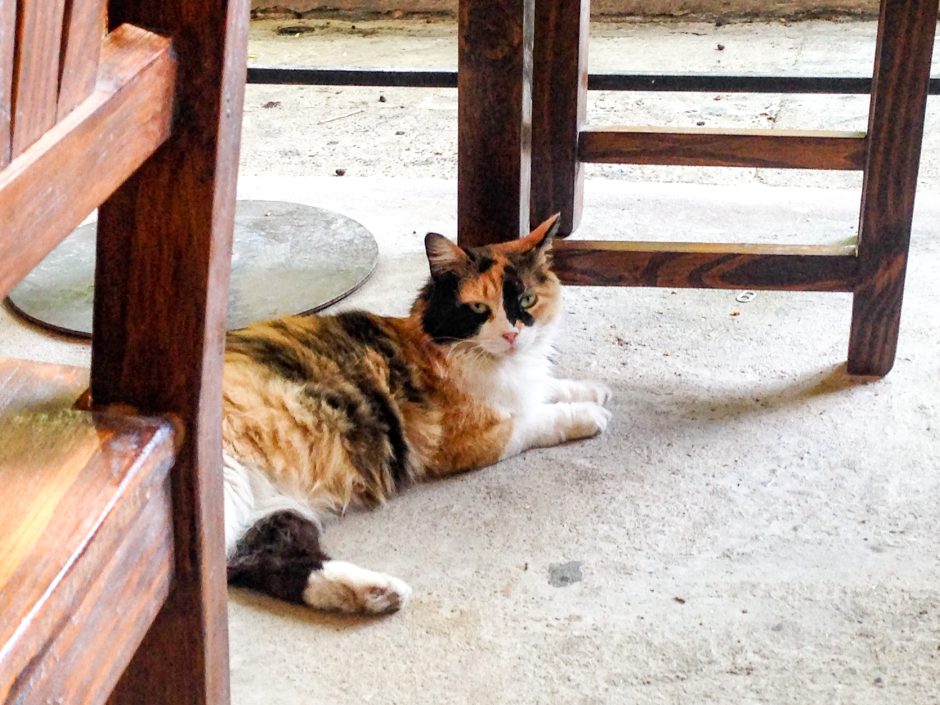 The calico café cat has caught a tiny bird. The blueblack bird was minding its own business, pecking in the short grass under the trees, hopping over twigs, when the cat stealthily scurried in to snatch it. But then somewhere between the trees and where it came to a stop under table number fourteen, the calico changed its mind and decided it would make a better toy, hockeying the tiny bird along the cobblestones from table to table to table until finally the thing was nothing more than a blister of feathers that refused to move any longer. In the end, this disappointed the café cat and after one last flick of its paw, it left it, playtime over. Meanwhile, after another cup of coffee, along with a loud birthday party with balloons, cake and ice cream at table five, the ball of feathers twitched. I looked for the cat to see if it saw but the birthday party had shooed it away. Another shutter of feathers, followed by something like a stretching of sore wings. A beak showed itself.

The birthday party was full of laughter and squeals, along with an occasional double-dare, and it wasn’t long before a cute pinkish dress spied the bird and slowly made her way over for a better looksee. The bird, painfully unfolding itself, was better and almost back to bird-normal. The pink dress with shiny shoes leaned down to get a closer look, and of course her leaning brought others, even the birthday boy himself. I can only frown at all of this but say nothing. The bird looks up and seeing what’s what tries flying but nothing comes of it except a big flapping. The birthday group laughs at this and now the birthday boy thinks it a good idea to pick up the bird, after all it is his birthday. And when he does, the pink dress, who, by the way, has some of the reddest cheeks I have ever seen, decides to squeal and when she does the boy throws the bird down as if it is suddenly too hot to handle. This brings a bigger laughter all around, and somewhere a balloon pops. Finally, a big person strolls over to see. The group is instructed to leave the poor creature alone, it may be sick, diseased. “Go wash your hands.”  So, the birthday party group moves back to the party table, just in time for cake and ice cream. All the while, the birthday boy is busy explaining to anyone who will listen how the bird jumped at him, almost pecked him and how he had no choice but to drop it. And no, of course he is not afraid of birds, don’t be silly, laughing to show them what silly sounds like. The others gathered around to listen, glancing back over their shoulders to see what has happened to the bird but when they cannot be sure where it went, they lose interest and turn to see what Sally is crying about.

Meanwhile, I am almost done drinking my coffee, thinking how birthday parties haven’t changed after all these years, when out of nowhere the calico café cat returns and seeing that its toy is still there, wide awake and almost back to bird-normal, decides that, come to think of it, eating it isn’t such a bad idea after all.

My name is Craig Loomis, and for the last eighteen years I have been teaching English at the American University of Kuwait in Kuwait City.  Over the years, I have had my short fiction published in such literary journals as The Iowa Review, The Colorado Review, The Prague Revue, Sukoon Magazine, The Maryland Review, The Louisville Review, Bazaar, The Rambler, The Los Angeles Review of Los Angeles The Prairie Schooner, Yalobusha Review, The Critical Pass Review, The Owen Wister Review, Juxtaprose Literary Magazine, Cumberland River Review, REVUE, Consequence Magazine, Fiction International and others.

In 1995 my short story collection, A Softer Violence: Tales of Orient. London: Minerva Press was published; and, spring 2013 Syracuse University Press published another collection of my short stories entitled The Salmiya Collection: Stories of the Life and Times of Modern Day Kuwait. October 2021, my novel: This is a Chair: A Lyrical Tale of Love, Death and Other Curriculum Challenges was published by Sixty Degrees Publishing.