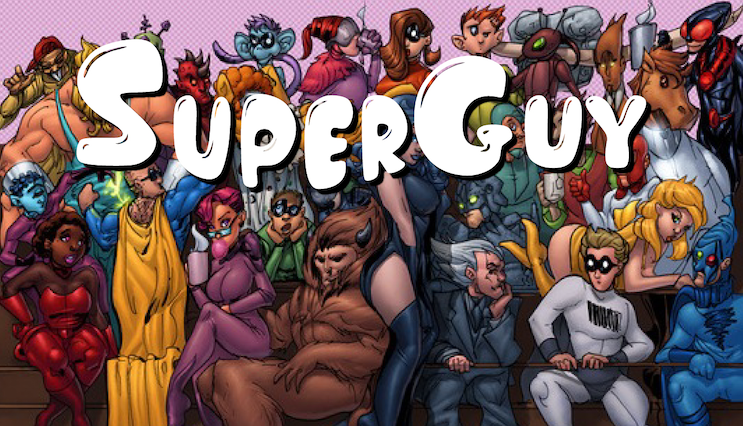 Dear FanGirlz and FanBoyz, tonight we present Chapters 7 and 8 of Kurt Clopton’s outrageous and funny novel, Superguy. Yes, originally written as a novel, the story of Superguy was transformed into a audiobook by Ruby Fink and her talented voiceover artists at Faux Fiction Audio. You won’t see it as a choice on Amazon just yet, but you will, soon.

If, after listening to these first eight chapters, you simply can’t wait another minute to hear the rest, you can find the complete audiobook here on SoundCloud.

Please click the arrow below to listen to Chapter 7 of Superguy.

Please click the arrow below to listen to Chapter 8 of Superguy.

A few words about audio production and the team at Faux Fiction Audio. The act of creating characters in audio recordings is called voiceover, and by and large it’s done more for love than for money. It takes hours to record and subsequently edit and polish narration and characterizations, earning the actors Jeffersons and Roosevelts rather than Benjamins. And so to thank, celebrate and honor the hard-working people whose creativity abounds in the superbly listenable Superguy audiobook, we present:

C.J. Longhammer, Narrator. C.J. hails from New York City. His theatrical training includes The Oxford School of Drama, Bennington College, and years of professional entertainment work in Los Angeles. C.J. is currently pursuing an MFA in Screenwriting at UCLA. He is drawn to stories about Family, Love and Coming of Age, and he is honored to be a part of this wonderful production.

Lucas Guererro plays Oliver/SuperGuy. Lucas is a nineteen-year-old sophomore attending College of the Canyons. His interests include reading, writing, acting, watching movies, attending music festivals, and making others smile. He lives in Santa Clarita with his family and his dog. His pastimes while at home are listening to music, collecting vinyl and playing video games with friends.

Ryan Bozdet plays the Mayor, Chief of Police and Cyclone. Ryan is a young, kooky, voice actor who lives in California with half his faux bros and sisters. Balancing school and acting, he also likes goofing off, watching cartoons, and playing video games. If he ever leaves Faux Fiction, it will either be because he got hired by Hollywood or the mothership took him home.

Travis Lynch plays Roger. Travis Lynch is a professional voice actor whose urban, contemporary style has lent a heartfelt, yet comedic air to his Superguy role as Roger. A student of Sunday Muse, he completed an animation demo with Great Big Voices, and has also recorded commercial spots to promote Sklz Sports Training Equipment, Chevy, Buick and GMC among others. A loving husband and father of two, he lives in Petersburg, Virgina. This is his first role with Faux Fiction Audio, but it will not be his last.

Violet Fink plays Emma. Violet is a writer, model, and actress living in California. Her first debut as a voice actress was for Faux Fiction, playing the part of Sam in Mickie McKinney: Boy Detective, though as soon as she graduates, Violet plans to study psychology and get a degree as a family therapist. When she’s not in school or having fun with her friends, she loves reading, theater and photography.

Steve Schleicher plays Sergeant Przybylinkski. Steve has been acting since the age of thirteen.  He has worked as a Social Studies teacher and football coach for twenty-five years. Steve has a wonderful wife named Kathy and three awesome kids; Jake, Joe, and Katie.  When not in his home studio or spending time with his family, he is usually involved in a local stage or film production.   Steve has been fortunate to work on projects for Children’s Hospital of Wisconsin, the City of Watertown branding video, Realty Executives Platinum, Towne Cinema, and temporary audio for Raven Software.

Ruby Faux is the Faux Fiction Audio Producer, Writer, Director and Editor. Ruby Faux studied Film Production at Chapman University’s Dodge College, with a minor in Narrative and Dramatic Literature. She fell in love with audio shows while finishing her senior year and created her own show, “Mickie McKinney Boy Detective.”  Since then, she has enjoyed bringing her cast of talented friends together to create new audio adventures. When Ruby’s not writing and creating new worlds, she’s reading, watching cartoons or ballroom dancing.

Kurt Clopton, Author, without whom none of this would have been possible. Kurt works full time as a professional Olde Tyme photo model, specializing in wide-brim hats and saloon backgrounds. He grew up in the Midwest and attended Luther College where he earned his undergraduate degree in Art and English. In an attempt to accumulate a debilitating amount of debt, he also has a Master of Arts degree in English from Iowa State University. Kurt spends most of his spare time perfecting his mediocrity at tennis and guitar, and the rest of it watching instructional YouTube videos on how to fix whatever he has most recently broken.