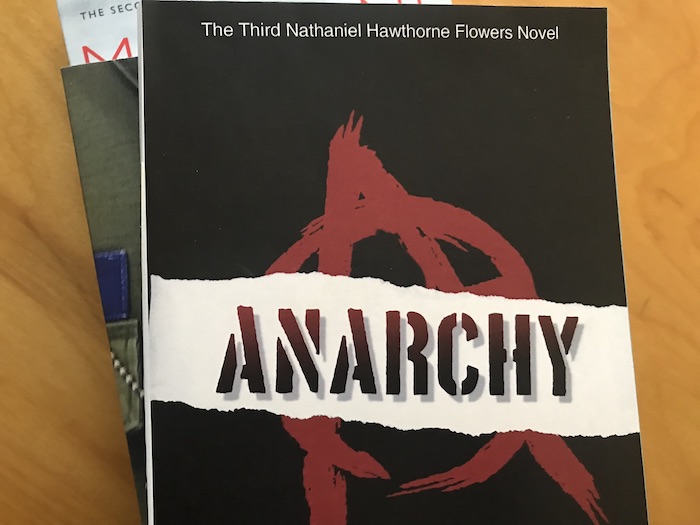 Set amid the tumultuous days of American dissent against the Vietnam War and nationwide student riots, Anarchy brings Tim Rosencrantz, from Wild Blue Yonder, back into Nathaniel Hawthorne Flowers’s life, intent on evil and disruption. Tim, student protester, SDS member, avowed Communist and now discharged from the Air Force, has had a transformation on the bombed-out streets of New York and is now a full-fledged member of Weatherman. Bent on bombing America to its senses, he wants Nate at his side.

It’s now 1971 and Nate’s writing career has launched with the publication of The Pieces Fit, his collection of short stories. While he is anti-war and intellectually empathetic, Nate is unwilling to participate in Tim’s anarchy – until, that is, Tim coerces him. Their lives become an antagonistic pas de deux as the stakes rise: They try to remain collegial while despising each other’s lifestyle.

Unbeknownst to Nate, the FBI has Tim and Crystal, his naive teenaged moll, under surveillance. Everyone – Jane, Nate, Gerry Iron Moccasin, their friends at the Ethereal Ranch – realizes this cannot end well—just how badly they cannot imagine as Tim and Crystal plot the bombing of a Bank of America.

Jack is the founding barista of Fictional Cafe. He wrote over a dozen nonfiction books before returning to his first love, fiction. Wild Blue Yonder was the first volume in the Nathaniel Hawthorne Flowers trilogy and was followed by Madrone and Anarchy, all published by Wheatmark. A fourth novel is in progress. All these novels are available in ebook, Amazon paperback, and Audible formats.

Anarchy will be published next Tuesday, May 28th. Search Amazon for “Anarchy Jack B Rochester” to get yours.