We sat side by side in the quiet café, a stone’s throw from the Parc de Sceaux, famous for its Château. Outside it rained. A woman passing with a dark blue umbrella stopped and peered at us. For a moment I thought she was going to come and join us at our table. She looked familiar, her face somewhat twisted, possibly anguished. Clearly the battle to remain an individual in the angst-ridden city had taken its toll on her.

“Do you know her?” you asked, staring at a spot left of my head.

“I do not,” I said, turning to see what it was you stared at. The waiter.

“Monsieur,” he said, clicking his heels and bowing his head.

He stared at me for a moment, his eyes suggesting a narrative involving castration and unnaturally contorted arms and legs.

“Pomerol,” you said, with utter simplicity and confidence. Your French surpassed mine, alas.

“Tout suite,” said the waiter, clapping his mouth with a light pop.

This is something I saw in movies, admittedly. Added for colour. Why let him appear as a faceless mannequin or automaton? In any event, our eyes returned to the woman with the umbrella, who continued standing outside, gaping at us.

“Should I go say something to her?” I suggested.

The super-realism of your irritation could not have been more enhanced by fast-setting silicone rubber. I must admit, the harshness of your gaze took me aback, subverting my sense of what was real and what was mere playacting.

“It’s raining hard,” I said. “She must be getting soaked.”

“You seem very interested in her plight. You find her seductively downtrodden.”

The waiter appeared with a bottle of Pomerol wrapped in a white linen cloth. He uncorked it and poured some in a glass. I deferred to you, since you understood wine better than I did. You tasted it, proclaimed it superb, and we continued our drama.

“By the way,” I said to the waiter, “is this a normal occurrence?”

“You mean ze woman? She is, how you say, fou comme un chapelier.”

You laughed, your French being better, but I got the gist. The woman was a little unzipped. The waiter snapped his fingers and strode off. His was a personal means of expression.

We sipped our wine. The woman continued her vigil, rain pelting her diagonally as the wind picked up. It rattled the awnings. I wanted her gone, and unconsciously waved to shoo her.

“What are you doing?” you said, leaning forward with intensity. “Get fucking serious.”

“She’s making me uncomfortable,” I said.

Teeming, monkey-like figures crowded my brain at that moment, as the wine kicked in and your attitude filled my nostrils with a smell of teenaged urine. I sat back and crossed my arms on my chest, and this too struck you as offensive.

I had embraced the term, at that point in our relationship, as an endearment of sorts. Not at this moment. It pierced me like a dirk. I gasped and clutched my side. Is this the pain that Jesus felt on the cross, when the Roman soldier shanked him?

The woman continued standing in the rain, under her dark blue umbrella, gazing at us. The rain fell without relent. We drank our wine. That is to say, you drank the wine. It disagreed with me. You drank until your eyes shone. But that was when your cruelty really kicked in. You threw on your shell and headed out the door before I could say a thing. I saw you through the café window strike up a conversation with the woman. The woman did not like what you said.

The waiter arrived and asked what was going on. I didn’t have to explain. The mad woman took a swing at you and without hesitation you countered with a slap to her jaw that knocked her to the ground. The waiter rubbed his hands together and smiled. “Fantastique!” he exclaimed.

Then, you leaned over to help the woman to her feet again. I didn’t understand. The two of you conversed. About what, you never told me. Meanwhile a gust got under the woman’s umbrella, and carried it off down the street, skirting street lamps and power lines, and hurling it toward the rain-washed city. 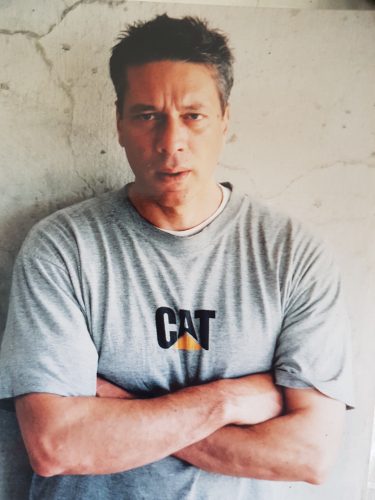 Salvatore “Sammy D.” Difalco’s work has appeared in many print and online formats. He splits his time between Toronto and Sicily.