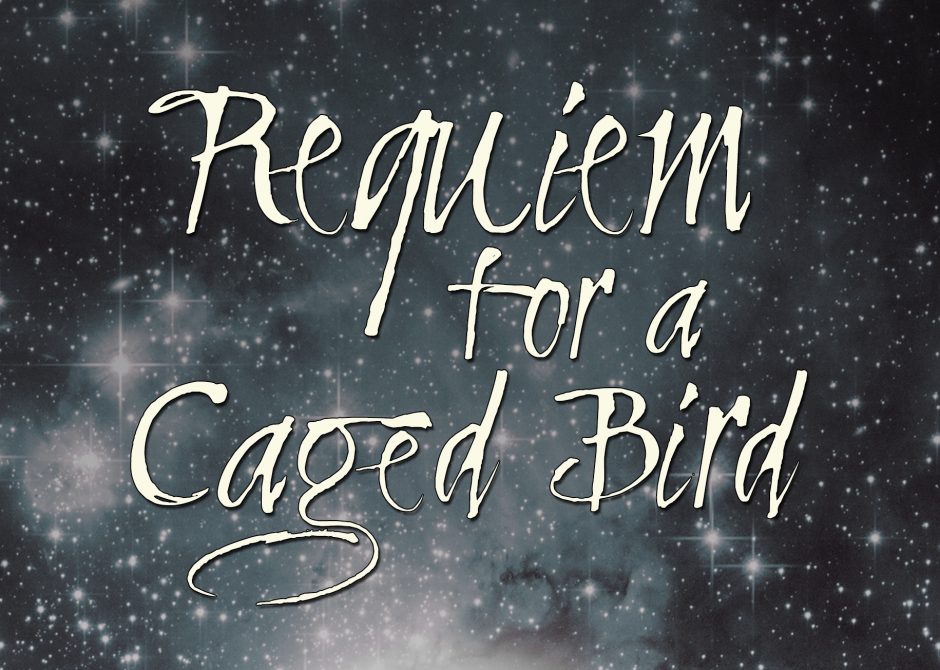 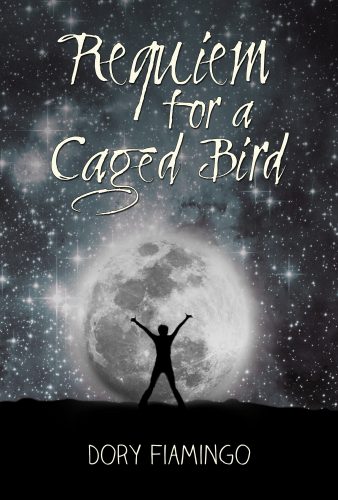 We’ve been fortunate to have published both a previous work of fiction and some original fine art by Dory Fiamingo in the past. The woman is a creative maelstrom, and has finished another novel, Requiem for a Caged Bird. It’s a great read, it really is. We hope you get to read it in its entirety in the very near future (as we have), but for now we’re presenting a special Three Days of Dory excerpt, yes, you guessed right, for the next three days!

Here is the first of three short tastes from this wonderful work of a contemporary fantasy fiction. Sebastian (“Bastian”) is an almost-immortal private eye able to leap from one world to another. Maggie, the love of his life, had walked out on him thirty years earlier. She shows up at his cosmic bookstore, The Falinn, and introduces Bastian to Aderyn, her granddaughter (whom she assures him is unrelated). Later that night, the eight-year-old girl, who possesses magical powers, is kidnapped. Bastian must, of course, give pursuit.

Requiem for a Caged Bird

This, the place where we eat doughnuts and pizza, drink beer and mochas, and listen to Pink Martini, Rob Thomas, and Dave Matthews, this is the Mortal World, the real world. At least, I say it’s real because I consider it my home. The Sidhe and the smaller fae come from the immortal world of Emladyus and call this world Backushai, meaning Backward Hell Hole. Tells you what they think of us, doesn’t it? I don’t mean to say that their world is any less real than this one, but this one has a solidity that doesn’t exist elsewhere.

While everything in the Shadowlands was a bit wispy about the edges, in the spirit world of Veritan solid form has even less meaning with its ghosts and forgotten gods. Necrosham is where the really bad things are: demons, fallen angels, and things too terrible and evil to live anywhere else. Since there must be balance in all things, the Mortal World is smack dab between all the baddies and all the goodies. Yep. Aren’t we lucky?

Right now home meant I had access to chocolate, pain killers, and sunlight. Everything I needed, though not necessarily in that order.

The Door I’d stepped through opened into the recessed entrance of an old cellar down the block from my bookstore—yes, I own a bookstore called The Falinn. Why is that so surprising? Anyway, the Doors that haven’t faded completely are pretty easy to spot if you know what you’re looking for. Most freestanding stone archways or a pair of pillars seemingly out of place could be a Door. I’ve seen them made of bones, the curved boughs of pine branches, and even carved statues hundreds of feet high.

The Scrits of the Shadowlands are the only creatures able to reach into other worlds and they don’t use Doors to do it. I’ve a theory that small echoes are created in places where the nature of the Shadowlands is mimicked, and these echoes cause cracks, maybe even windows, in the barrier between worlds. Beneath beds, in closets at night, and that dark place at the bottom of the basement stairs before you turn on the light make the best places. So, moms and dads, listen to your kid the next time they say they saw a monster because they probably did.

That’s how Mrs. Borelli’s ring was taken, snatched from the top of her bedside table while she snored unawares. The ring now felt like it weighed at least five pounds and was dragging my pocket down to my ankle. Good thing I wear a belt. The ring needed to be cleansed with sunlight and so did my leg. Of course, this is Portland, Oregon, and today was grey and rainy, which was no help at all. Sometimes I wondered why I didn’t just move to California where there’s tons of sun, but some things have to remain under cover of darkness. So I have an ultraviolet light, which makes more sense than sitting in a public park while black goop is forced out of wounds no common animal could make and that evaporates in sunlight.

Try explaining that to a cop and see how long you stay on the happy side of a jail cell. Then again, this is Portland. People would probably just assume you’re weird and leave you alone.

There was no one around so I took the opportunity to inspect my leg again. It wasn’t the first time I’d been bitten by a Scrit. It was, however, the first time the Scrit had such big teeth. If I was human, I’d need a lot of stitches and a short vacation in the hospital. As it was, blood trickled out of only two of the punctures and it seemed to have pretty much stopped. Crossing back into this world always seemed to help speed up healing, but it was still going to take a few hours to heal completely. I limped towards my store and my home.

A flicker of pink light flashed briefly as I stepped onto the doormat. “Hey, Dorna, I’m back,” I said to the small fairy who had appointed herself my watchdog. The pink light fluttered brightly a handful of times, then spiraled out of the large blue ceramic pot containing snapdragons and up into the sky. She had adopted my brother Neeko and me decades ago, following us from city to city, determined to keep us in her sights. She didn’t actually do anything but say goodbye when we left and greet us when we returned.

The small fae are just one of the preternatural groups that made up the Kindred: the others were the Sidhe, fae—both wylde and free, Shifters of all sorts, witches, goblins, vampires, and myself. Darklings, the results of demon-human, or demon-wizard couplings were included, but were somehow never really included. They’re kind of like the outlaw in-laws in that none of them are really welcome to family holiday dinners. I’ve known a few darklings, but only in passing and I was relieved when they left.

The second my hand began reaching towards the back door of The Falinn, the lock clicked and it opened. “Thanks,” I said as I hobbled inside. The door shut softly behind me and the lock reengaged.

I grabbed my LOOK! ZOMBIES! mug off the drying rack near the sink, noting that small droplets of red paint meant to resemble blood had been tastefully added during the night. Usually I would have complained about the shop messing with my stuff, but it was cool. The room’s second door opened and, mug in hand, I stepped into the world of The Falinn Bookstore, Portland’s only truly hidden bookshop.

I ducked on instinct as an entire shelf of paperbacks soared through the place where my head had been a moment ago. Like a flock of birds, they arched up among the shop’s wooden crossbeams, then dove into the Romance section. I eyed the aisle warily—the books had either shelved themselves or were lying in wait. Since Romances were seldom well behaved, I pitied the next person to pass by. I made my way past customers; some silently perusing, some eagerly searching for something unknown, but everyone was smiling in pleasure. That’s the effect The Falinn has on people.

The Falinn was given to me as payment for retrieving a necklace of fire opals for one of the Seelie Sidhe. The Seelie court is where the beautiful, nice elves are found. I always look forward to visiting there. Trips to the Unseelie court always require weapons. Lots of them. Anyway, I’d wanted a bookstore, but I got one unlike any other in this or any other world.

It was run entirely by magic.

It was every book lover’s dream of an escape and every bookshop owner’s dream of a business. Books floated, hopped, and danced across aisles and above everyone’s heads as if they had wings. They also rearranged themselves and created displays. When the Harry Potter books came out, a customer had jokingly said that the shop must have come straight from the novels with all its flying books. The Falinn had been greatly offended and no Harry Potter books were allowed through its doors for a full six months…and the customer hadn’t returned.

Shipments were received and signed for when I wasn’t there, but the delivery men never seemed to remember my absence. The computers updated themselves daily and kept track of our inventory. Taxes were somehow filed and paid quarterly. The windows were always clean and the shelves always dusted. Every evening a broom and dustpan swept the hardwood floors which had lost their polish in the wake of thousands of trodding feet. The air was filled with the anticipation of finding that perfect story and smelled of books, old and new.

The shop’s glamour made it appear to be a dingy, badly lit shop with a taped-up glass front door. It looked like no place you’d want to enter for fear of being attacked by giant monster cockroaches. In reality, it had stained glass windows with brightly painted teal and gold trim. Mosaics surrounded each window, swirls of colors flowing over the creamy exterior in a tribute to Moorish architecture.

Only those seeking adventure and learning, a place to abscond themselves in the comforts of its luxurious chairs, and to sit on perfectly placed stools to peruse a newfound delight, could see past the glamour. I’ve seen people abandon their friends on the sidewalk because they couldn’t see the shop. I’m sure it’s the glamour that keeps reporters away, since The Falinn would know the falsity of their intentions as soon as they stepped within a block. Customers also seem to have the habit of forgetting about The Falinn whenever they want to talk about it to someone who hasn’t been inside. I don’t know how the shop manages to do it all, but I’m glad it polices our customers because then I don’t have to.

Here’s to being the boss. 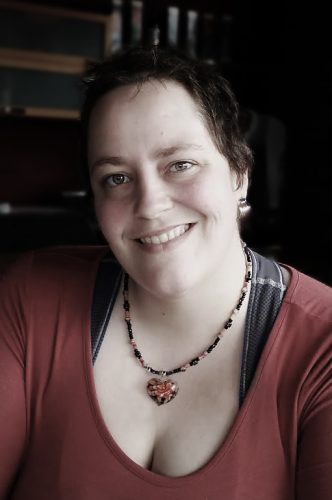 Dory Fiamingo grew up in Columbus, Ohio, and now lives and writes in Stevenson, Washington, pop. 1,494, up the Columbia River Gorge. Learn more about Dory at her website.