Editor’s note: We published an excerpt from “Call Me Harry,” from the the prolific Mr. Cade, in May, 2014. His new novella is a Western. 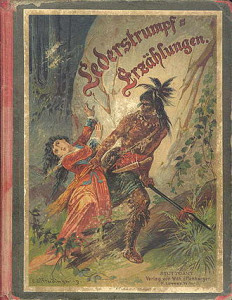 The cover of the German edition of “Leatherstocking Tales.” Courtesy Wikipedia

The trick question in the title, “At the Request of James Dougle,” may keep you wondering for a while, but wait – it’s a zinger. This is an old-fashioned Western, and I love the genre. Maybe because I grew up wearing cowboy boots, but more likely because in many ways the Western was the progenitor of the mystery and suspense genre, in which I dearly love to read and to write. The tales James Fenimore Cooper told of Matty Bumppo [aka “Leatherstocking”] were thrillers set in an untamed America, which translated forward into the wild-in-the-streets American cities where cops and private eyes fought crime.

Race, it seems, has always been at issue in America: first the native American Indians and, as Cade tells his story, that of the black man. James Dougle is a “freeman,” not a slave, but not really. He’s still subject to all the prejudice and fear the white people elicit. Intolerance and hatred are evident from the earliest scenes in this novella, where we meet Throwpete, one of the oddest and most unforgettable characters in the story [although he has considerable competition].

As Cade demonstrates again and again, if there is one constant in American Wild West justice, it’s injustice. The story he paints is not unique in this respect: I’m reminded of two visual stories, the 1961 film “One-Eyed Jacks” [based on the novel “The Authentic Death of Hendry Jones” by Charles Neider and starring Marlon Brando] and HBO’s 2004 series, “Deadwood,” David Milch’s depiction of the little town I partially grew up in. This Deadwood – which may be accurately portrayed – is filled with nasty, selfish, cruel people, personified by Al Swearengen, played by Ian McShane. So nasty was he I had to stop watching.

There are some real nasties in “At the Request of James Dougle,” too, and they serve to sharpen Cade’s story very well. In this respect his is a classic Western story where revenge becomes the sharpest tool in the kit and the chance for redemption is nil. For this story, that’s a good thing. The other good thing is that in many respects, this isn’t an atypical Western. If it were, Throwpete wouldn’t end up as he does. But I don’t want to spoil the story for you.

Upon finishing another of Randy Cade’s works, it occurred to me that he may be the fictional incarnation of Hunter S. Thompson. First there was “Call Me Harry,” the story of an old bank robber who can’t seem to go straight. Then there was “Fire Sale,” about a guy who runs afoul of a nefarious realtor who will do literally anything for a sale. I look forward to reading “Die Clean.” Love that title. Learn more at Randy Cade Books. “At the Request of James Dougle” is available as a Kindle ebook for 99 cents.