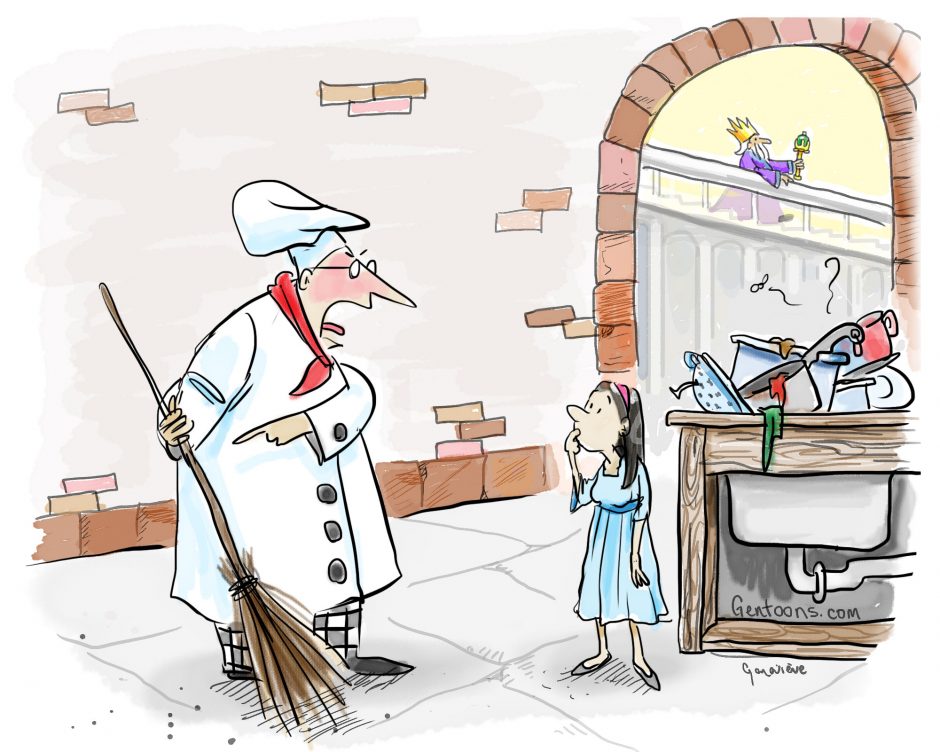 Once upon a time there lived a lonely princess. She had a strong, wealthy king as a father but he paid little attention to his daughter and didn’t care if people starved in the village. In fact, he mostly only cared about money.

Although Olivia’s father didn’t pay much attention to Olivia, he still loved her and cared for her. The one thing he was doing wrong was keeping Olivia away from the village that was once a happy place, full of laughter and singing. Olivia longed to go to the village and make sure the villagers were warm before the cold fell and winter moved in. Whenever Olivia tried to ask her dad a question, he would interrupt her right in the middle of a word.

One Tuesday afternoon, the king announced that his daughter Olivia was getting married. Olivia didn’t even know who she was getting married to. So she asked her father. This time he didn’t interrupt and answered her question. The king said that she was getting married to an ogre that would give him two huge sacks of gold for Olivia’s hand in marriage. But Olivia didn’t know who this ogre was. She had never seen him or talked with him before. She knew nothing about him. She tried her best to persuade her father to let her choose her husband. The king paid no attention to her because he was so excited about the marriage and the glittering gold coins he was going to get. So Olivia planned to run away the day before the marriage.

Olivia asked her dad for three bridal gifts and he gladly listened to her proposals. Her first wish was for three dresses. One as shimmery as the night sky, another one as bright as the sun and the last one to be as beautiful as the sunset. As her second gift she wanted a thick coat made out of all the different animals’ furs in the kingdom. Finally as her last gift, she wanted a very big bag.

The king granted her wishes and hired three of the most intelligent seamstresses in his kingdom, his best hunters to hunt animals in the forest for their skin, and bought a fine bag out of strong silk.

The day before the wedding came and the gifts were given to Olivia. That night Olivia folded her dresses neatly into the bag. Then she hid a few of her mother’s precious souvenirs in it, her mother’s wedding ring, a tiny spinning wheel that her mother played with when she was little, and a small key which opened a jewelry box that was buried with Olivia’s mother. When Olivia was finished packing, she snuck out from her window into the bushes beneath, quietly and unnoticed.

That night it began to snow. Olivia could stay calm because no one would know where she went with her footprints covered with snow. She found an oak tree that had a hole she could sleep in. Olivia cuddled up in the hole and slowly fell asleep.

She awoke the next morning to a clip-clap sound, like shoes. Dazed, she looked around. She was in a room with a bed, chair, basket of food and many other things. And there was a man in a formal suit standing near the door. Olivia asked “Who are you?”

The stranger answered, “I am the grand duke of the royal highness King Tut.”

Olivia laughed. “King Tut? Who is that?”

“The king of Turville.”

“Never heard of him.”

“Who are you, young lady? Where are you from and how old are you?” asked the duke.

“Call me Miss Olivia. I am from a small village nearby and I am 17 years old.”

“You are in a little room next to the kitchen of the castle of the ruler, King Tut.”

After Olivia ate her breakfast from the basket, the duke led her to the kitchen where the cooks were busy yelling, cooking and serving. It was like a zoo in there. Olivia wondered why she was taken to the kitchen. Well, perhaps to cook. They didn’t know she was a real princess so she had become one of the workers for the king. She had to do the work that the other workers did, like plucking the chickens, cleaning the dirty pots, sweeping the floor and many other dirty and unpleasant things.

One day while Olivia was working, she heard that the prince of Turville was going to have a ball to find a princess because he wanted to get married. Olivia asked the cook if she could just look at the guests when the ball started. The cook agreed that she could go but just to look and she had to return to the kitchen by midnight.

On the night of the ball Olivia washed off all of the dirt from her face and wore her dress that was as bright as the sun. When she entered the ballroom, the prince stared at her in amazement. He slowly walked over to Olivia and asked her for the first dance. Olivia agreed. They danced dreamingly until suddenly the clock struck midnight and Olivia ran for her life to her little cottage, but while she was running she lost one of the slippers her father had given to her that matched her dresses.

When she got to her cottage she changed into her thousand-animal skin coat, put dirt on her face and ran to the kitchen to get the prince’s and king’s dinner ready. Right before the soup was to be served, Olivia put her mother’s tiny gold spinning wheel into the prince’s bowl of soup. Once the bowl was set in front of him, the prince slowly and politely drank the soup while talking to his father about the maiden he had danced with at the ball. In the midst of chatting with his father, he found the spinning wheel but kept it to himself.

He told his father about Olivia’s golden hair, about her beautiful gown and about how her eyes looked like stars shining in the dark black sky in the night. The king was pleased to hear about this maiden and wanted to meet her. The prince told him she had run away, but he had found her lost slipper. The king told his guards to find this maiden whose foot fit in the beautiful slipper. They looked around all over Turville but there was no sign of such a maiden.

So instead the prince held another ball to find his beloved princess. Olivia again asked the cook and the cook said yes once again. So Olivia raced to her cottage to wash the dirt from her face and put on her gown that was as beautiful as the sunset. Again when she walked into the ballroom, the prince immediately fell in love with her. They danced until midnight ever so gracefully. They were like two birds flying beside each other. They were like one. But when the clock struck midnight again, Olivia ran for her life and once again lost one of her slippers.

The prince was frustrated about not knowing who she was or where she lived. That night while Olivia was making soup, she put another one of her mother’s souvenirs into the prince’s bowl of soup, this time the wedding ring. Again the prince found the gold souvenir. The prince couldn’t sleep that night because he was busy thinking of the maiden who he had met that night and the time before. The next morning the prince walked through the castle, into the kitchen, ballroom, hallways, throne room and then to the village, just looking around to see a cottage that could be suitable for the maiden to be living in.

The next day while the prince was admiring the beautiful shoes that the maiden had dropped while running away the king was looking through the cracks in the door at his son, feeling bad for him and thinking about the time when he would have to leave the village and hand his kingdom over to his son.

A few years passed and the prince had no luck finding his maiden. His father had died on a rainy, Sunday morning while he was walking through the halls in the castle. The prince had grown strong and was able to rule the kingdom. Soon enough, the new king declared that he would have a ball to find a bride. Olivia had become a beautiful lady and was happy that the king was going to have another ball. She asked the cook if she could go to the ball to see the guests come in again. The cook complained that she had already gone two times but at last said Olivia could go for the last time. So after her evening work, she skipped to her cottage and got out her dress that was as shimmery as the moon, washed off all the dirt and simply walked delicately to the entrance of the castle.

Olivia went inside to the table with some lemonade in a glass bowl. While she was pouring the lemonade into a glass the king spotted her and asked her to dance. Olivia said she would be delighted to. So they danced like a couple would at their wedding. While they were dancing Olivia lost track of time. As midnight struck she quickly ran to her cottage but accidently dropped another one of her slippers. She had no time to change so she just quickly put on her fur coat and a white cloth on her head and ran to the kitchen to prepare the king’s soup.

When she got to the kitchen she could not find any tomatoes so she ran through the halls to the storage room where all the food was kept. While she was running she bumped into the king and her coat and white cloth fell off. He helped her up. When he looked at her, he recognized her face.

They stood in silence for a good five minutes. Then the king asked for her name. Olivia didn’t answer. “What is your name?” he asked again.

She sighed, “Olivia, your majesty.” The king loved her name. He smiled and kneeled down. He looked up and saw Olivia’s shining eyes look back at him. He was certain that she was the one he was looking for.

“Olivia? Will you marry me?”

She looked up. She looked down into his face and grinned. “Yes.”

The prince put a ring onto her finger. It was very familiar and it fit perfectly. Then she remembered. She had put it in the princes’ soup. She smiled. “It’s perfect. It’s beautiful. Thank you.”

A few weeks later they were pronounced king and queen of Turville. The king took Olivia’s hand in his own and Olivia took the king’s hands in her own and they lived happily ever after. 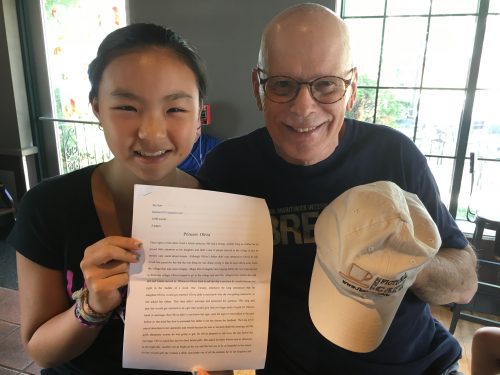 Joy Son is ten years old, which makes her our youngest Fictional Café author. This is her first published short story.

The original art was created by Genevieve Shapiro, a Boston-based artist whose illustrations and cartoons you can view at  www.gentoons.com.