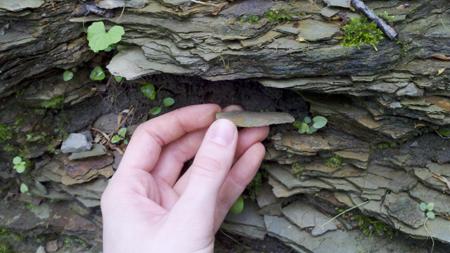 The silk umbrella that covered her head

had a hole in its top, in case of rain.

She was meeting her husband

for a rendezvous outside a phone booth.

Her daughter followed, six steps behind,

reciting the only two definitions

of sodomy that she knew.

An elevated train on the left side of the road stopped;

three men fell out onto a steel track below.

The daughter ditched her at a fork in the highway,

went on alone to the dock to meet an old lover

who would take her away on a cruise.

She had forgotten her ticket; he said

He asked if she needed a baby sling;

she predicted he would marry someone young.

“The Way She Gathered Stones”

She was not dead, but her skin

was funeral parlor white, and she

moved zombie-like through the trees.

Who was she that refused help,

not allowing a companion

to shuffle through the pile with her?

From where came the need

She stopped to turn over each stone;

in her expressionless eye.

Something did not belong

in that forest rock pile. The lifeless black hair?

The open-toed shoes? The shopping bag on her arm?

“Shale,” she mumbled to no one.

A limp arm dropped a rock

It was the teeth that looked suspicious;

too long and too yellow for the face.

They glowed through the glass window

He was looking for fallen trees to haul away,

free of charge, he told her.

She gave him a go-ahead.

He flashed his teeth and went for his weapons.

An accomplice sat in the truck.

Together, they chain-sawed dead and living.

In their wake, azaleas perished,

dogwood fell to the ground,

no mercy for ancient hydrangea.

Judith Manzoni Ward is a teacher of English Language learners and an amateur gardener. She also writes fiction and poetry in her spare time. Check out her website judithmanzoniward.com for more poetry, fiction, blogs and nonfiction.