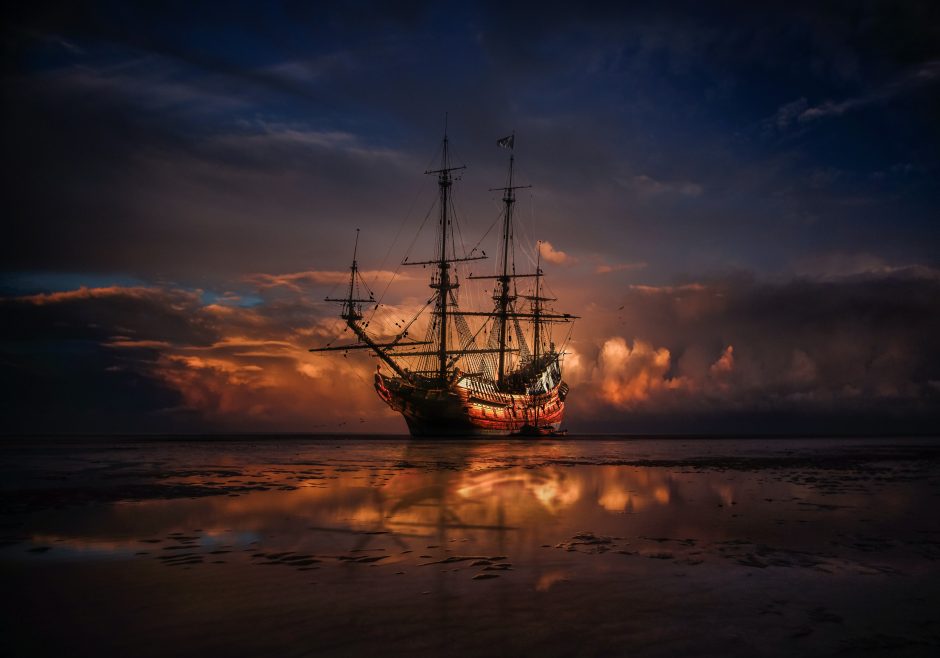 Ayanna, who was already an old salt, licked her right paw. The Curse of the Abandoned Scallywags had visited her. She next licked her left paw and then looked across the boat to the crow’s nest on the mainmast. If only she had believed Cook, she might not be limping.

He had warned the crew, after they had dragged him out of the sea, about the curse. More exactly, he had scolded them, while he shook water out of his fur, heedless of who was standing nearby, that blaspheming another soul would bring retribution in the form of conveyance. More explicitly, as he had sucked down the first mug of rum given to him, Cook had declared that whoever spoke words of affliction, upon the furry head of another, would cause their merits to relocate to that other feline and would cause that other feline’s woes to transfer to them.

At the time, the assembled cats had laughed and had patted Cook on the back, all the while suggesting that his brain was as waterlogged as was his coat. After refilling his mug and throwing a blanket to him, they had returned to their duties. None had paid full attention to his jabbering.

Again, Ayanna licked her right paw; it hurt incredibly. Her punishment had come upon her after she had mentally cussed Guerdy, the First Mate. Guerdy, along with another tar, Lyron, had sired litters on, respectively, Laurette and Ayida. Worse, those toms had reported their amours’ true gender to Captain, despite knowing that females are prohibited from serving on pirate ships. Subsequently, Laurette and Ayida were confined to the hold. Captain vowed to send them to a more everlasting jail once the ship made landfall.

After those goings-on, Ayanna, who had enjoyed many, relatively uneventful, years at sea, became afraid. Perhaps, her femininity, too, would be revealed. She worked to be more diligent in hiding her sexual characteristics.

Still licking her wound, Ayanna pondered. Decapitating enemies, her specialty, was an okay business. One bite from her sharp teeth and rodents or birds fell away instantly. Analogously, stealing gold from government vessels, Captain’s forte, was acceptable employment; because of his industry, the bandits subordinate to him rarely lacked anything but fresh water. All the more so, teasing lesser crew, Lyron’s main endeavor, remained customary for voyagers full of drink.

Apparently, only casting spells on colleagues, even at the level of mere thoughts, seemed to get mousers in trouble. There was no other reason why, in Ayanna’s esteem, a bit of Stocky Cherif had appeared on the main deck, and why she, among all of her fellow swashbucklers, had stepped on it.

Many days and nights traded places. Ayanna worried more and more that the whammy, which she had brought upon herself, was permanent. She could not figure out any means to cause Guerdy to wish malignance upon her, thus to reverse her current standing. All that Ayanna realized was that she was doomed to suffer in perpetuum.

She licked her foot, again. Ayanna had shimmied up the mizzenmast into the secondary lookout for privacy. Since it was midday, most of the rest of the slinkies were sleeping. Only the kittens, all of whom had been locked away with their mothers, were awake. As usual, they were caterwauling.

As Ayanna repeatedly applied her tongue to the pad of her paw, she felt grateful that Guerdy had received the lesser of the curses she had mentally visited upon him. She had hexed him either to walk on the sharp edge of a Stocky Cherif shell or to become a victim of Red Band Disease. Red band disease was believed to be lethal to more than coral.

All things considered, it made sense that Ayanna had willed distress upon Guerdy since his former paramour, Laurette, had been kind of a friend to Ayanna. Whereas tabby buccaneers are solitary beasts, even ones like Ayanna welcome affection given on their terms.

Laurette had never growled at Ayanna. Furthermore, after their ship had raided the HMS Doggerel, at Warderick Wells, Laurette had slipped one of her pilfered bracelets into Ayanna’s sack.

That night, when Ayanna was three sheets to the wind, she had exclaimed to Laurette that while Exuma is filled with stunning cays and pristine sea, a greater loveliness was Laurette’s camaraderie. She told that other cat about her sisters, Raeni, Irie, and Leta and how, oddly, Ayanna had been born into a small litter. Ayanna shared, as well, that more bizarrely, all of her littermates had been queens.

Laurette, who had been less squiffy, had arched her brows (not her back) at her shipmate and had dared “him” to expound upon the disparity that “he” was implying existed between the sexes. At the time, neither Laurette nor Ayanna knew each other’s genders.

Ayanna had given no reply. She couldn’t champion males’ unchallenged privilege and she couldn’t publically declare that she was a wench.

Regardless, Laurette chose to rub against her. Ayanna involuntarily purred; she had missed her sisters’ physicality.

The next day, when Ayanna was inspecting portside shrouds, Laurette once more rubbed against “him.” The senior puss stared, unblinking, at the junior. In response, the junior lifted her tail and then walked away. Regrettably, later, Laurette lifted her tail to Guerdy, too.

It was when Guerdy lost the election for quartermaster to Laurette that he disassociated himself from her, in general, and from their fur to fur play, more exactly. Although Laurette’s pregnancy was slightly visible, Guerdy, all the same, took it upon himself to report Laurette’s existential femaleness, to Captain. He reported Ayida, too.

Wondrously, the scurvy dog known as “Lyron” confirmed no such report as he had “accidentally” fallen overboard. A few cheers had gone ‘round when Lyron failed to return to the ship.

A few days after Lyron’s death, Guerdy, too, was shoved to the rail. In spite of that attempt on his life, he had grabbed hold of Cook as he tumbled. The esteemed manager of the ship’s comestibles and champion of unpopular cats, not Guerdy, dropped into the sea. Providentially, Cook, unlike Lyron, was an excellent swimmer.

It was when Cook had climbed back onboard ship that he had warned of the curse. Perhaps, he was merely reminding himself not to think dark thoughts about Guerdy. Perhaps his dunk had liberated some of his secrets.

Fortunately, the arrival of a flock of seagulls made it possible for: Ayanna’s former reality to be restored, Laurette, Ayida, and their issue to be unchained, and that son of biscuit eaters, Guerdy, to come to a bad end. Namely, one dawn, when it was time to weigh anchor and to hoist the mizzen, a large cloud hovered over the ship. Sink me, but that visible mass was not made of water vapor but of hundreds of hungry sea birds, none of which feared cats.

That league dove at the adventurers on deck. Fur and feathers flew. A few of the outlaws sustained injuries. Even so, mostly it was the birds that were winnowed.

Just the same, Cook spat on every sky fish brought to him. Cook looked expressively at the hands on deck. Suddenly, everyone prowling the dungbie “needed” to be below. Accordingly, Cook squalled at Captain that without him receiving some help, there would be no feast. Cook had meant to concoct: roasted gull, gull stew and viscera soup.

Cook demanded that Captain free the kittens from the brig so they could help him slit necks, pluck feathers, and empty out guts. Captain, who had eaten his fill of raw sea birds and, thus, wanted to nap, needed Cook to stop yowling. So, he agreed to release the small varmints. There was little harm that those wee buckos, if loosened, could bring upon his ship.

Plus, even if those kits belonged on shore, their mothers’ mischief had protected his hearties from cracking Jenny’s teacup. All in all, losing one tom to Davy Jones’ Locker versus exposing most of them to venereal diseases was, in his esteem, a good outcome. Sometime later, Captain would briefly consider intentionally vetting female pirates.

Anyway, the kits were no match for the pile of avian corpses. Consequently, Cook tasked Ayanna and Guerdy to help him as they were neither on watch nor below deck. Besides, each of those brigands had stolen from his larder, and, as such, owed him.

Ayanna slowly pulled feathers from the dead birds. Every yank caused her right paw to throb with pain.

Guerdy, contrariwise, refused to help. He hissed at Cook that he would rather walk the plank, feed the fish, or what-have-you, than to work shoulder to shoulder with the scion of reprobates. He similarly refused the alternative job of swabbing the deck of pooled bird blood—such menial exertion was beneath him.

Guerdy did not retort, but narrowed his eyes at Ayanna, telling “him” that “he” was no better than a bilge-sucking landlubber for drudging with the youngsters. Guerdy noised louder and louder at Ayanna. He must have noised within his brain, too, for suddenly Ayanna’s paw felt whole again.

Nearly as instantaneously, Captain, whose cat nap had been disturbed, bound into the galley. He praised Ayanna for “his” bravery during the seagull storm. “Take a caulk,” offered Captain as he shoved Ayanna’s pile of birds toward Guerdy.

Guerdy hung the jib. He let loose many disrespectful words.

Captain shooed the kittens away. Such vile rhetoric was not for juveniles’ ears. Although Captain was not, during that one of his nine lives, a family man, he grasped that certain language was improper for young ears and whiskers. As per Guerdy, Captain cautioned him that if he did not cease his complaining, he’d soon be wearing the hempen halter, i.e. dancing the hempen jig.

The next day found Guerdy locked in the hold and Laurette and Ayida freely roaming. Captain had not wanted the rubbish-mouthed tom to enjoy further female company.

When, at last, shore was sighted, Captain commanded the company to heave to. The crew applauded; Captain had steered them to the pirate island, where grog was plentiful and enemies were scarce. Moreover, Captain had counted out additional doubloons to them.

When Guerdy extended his unscathed paw for a share of money, Captain had sneered. “Avast ye! No prey, no pay. While you were below deck, other furs were cleaning birds.”

Guerdy shrugged. In less time than it takes to snap a crow’s neck, that moggy jumped overboard.

His desertion meant that no accusers remained against comely Laurette and Ayida. Hence, Captain allowed those queens and their kits to disembark to the island. Ayanna, too, permanently left the ship.

She helped raise Laurette and Ayida’s offspring. As well, she enjoyed the company of “sisters” for a second time in her life.

When Laurette and Ayida’s kits became of age, they went on account. The majority of them lived long enough to tell Ayanna and their mothers of their adventures. One tale that they loved to revisit was the story of Guerdy the Pirate and the Curse of the Abandoned Scallywags.

KJ Hannah Greenberg has been playing with words for an awfully long time. Initially a rhetoric professor and a National Endowment for the Humanities Scholar, she shed her academic laurels to romp around with a prickle of imaginary hedgehogs. Thereafter, she’s been nominated once for The Best of the Net in poetry, three times for the Pushcart Prize in Literature for poetry, once for the Pushcart Prize in Literature for fiction, once for the Million Writers Award for fiction, and once for the PEN/Diamonstein-Spielvogel Award for the Art of the Essay. To boot, Hannah’s had more than thirty of her books published, and has served as an editor for several literary journals.

Previous postDeck the Halls (with Matrimony!) by Sassquach Radio
Previous post“Prince of Satan,” A Short Story by Mbizo Chirasha
Posting....