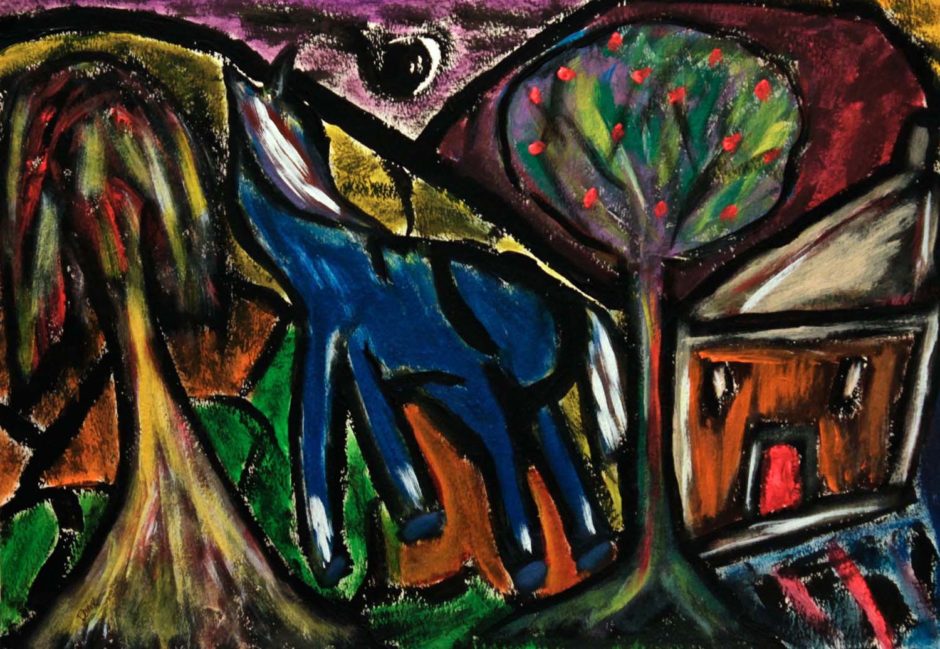 Editor’s Note: The Fictional Café was created with the old coffee shops of the 60s in mind. Back then, they weren’t just a place to grab a cup of joe on your way to work. They were hubs of social activity where poets would read to a captive audience, artists would hang their thought-provoking work and musicians would perform to set the mood.

When we came across Phil’s work, we were instantly reminded of the archetype that our Café was build upon. From music to art to poetry, Phil is a one-man show. We hope you enjoy immersing in this café experience. 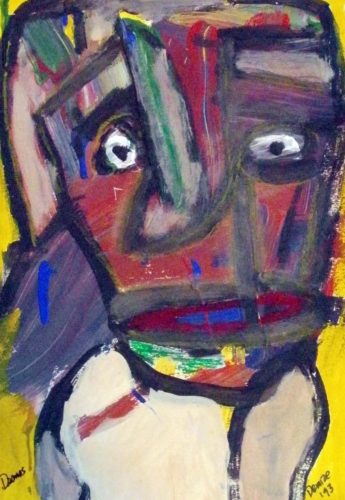 When I woke up this morning (I was on my mind)

Two roads diverged in the disappearance
of the would have been

I once had little children
and a wife

But now
I am in the middle of a forest

All paths are covered
by the foliage of destiny

The only way out
is to go deeper within 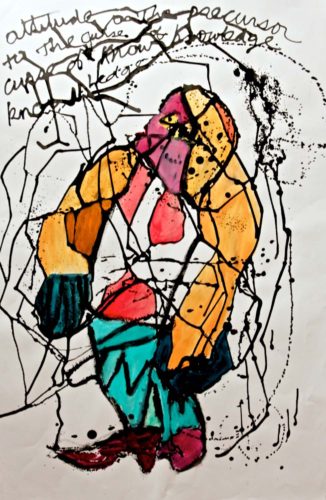 Attitude is the Precursor…

where I am sitting is not in this chair

absorbing the emptiness
above all
clockwise patience is the crux of time keeping                       time
like clockwork
the crucifix is broken
the cross we bear is an orgasmic shard
criss crossed
like sharp, elastic stones that stretch from here to there

the setting sun illuminates what is not there
where the shadows lick the darkness
before daybreak awakens
before God can comment
tongue in cheek
making eerie sounds doomed by silence
reverberating in a dome of miscues
deafening oxymorons hammering the drums
shrill trumpets brashly ushering in an outside chance
a fanfare
an entrance to the grace
of a hypnotic dance….. 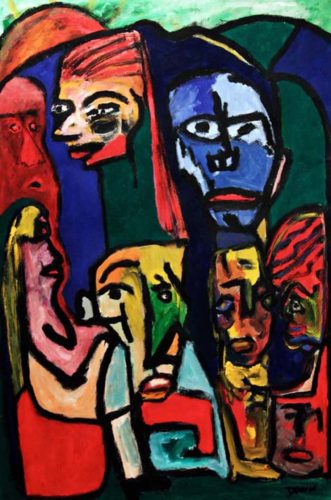 WHERE AM I
(IN THE SCHEME OF THINGS)

as I am to begin to end
again to begin 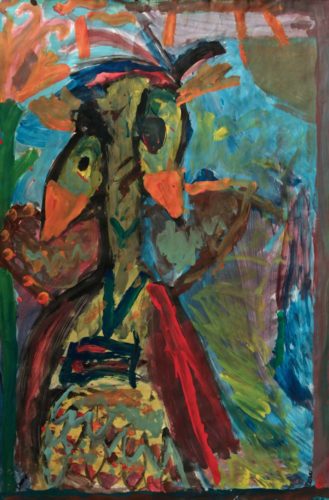 Two Birds Are Better Than One

this is the mourning after
the loss after sleep
after death’s afterlife
sympathetic tones
chime in
with their opinion
of this dreamy awakening
“It’s good…you’re up”
Now what?

I dangle
in between that shadow
and its source 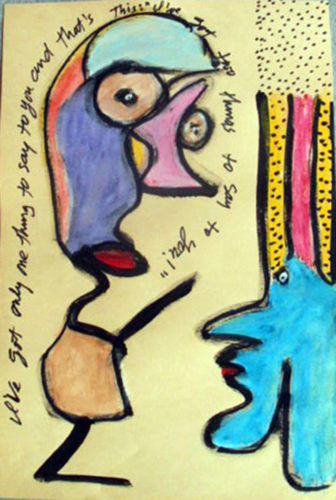 I’ve got one thing to say to you

“Riff of the Magi”

THE GARDEN OF EARTHLY DELIGHTS AND DARKNESS

In the garden
the world finds its routes,
its axis upon which
it spins a web of history.
It encircles the future
and entwines the clock
in an embrace
of earthly delights
and darkness.

The future stems
from the wings of birds and insects
using the currency of renewal
to carry its changes
and make a point.
Changes and exchanges
complete the underground revolution
that overtthrows Winter

In the light,
the spectrum opens its eyes.
Tears pour into the landscape
with joyous explosions of color.
Adhering to the principles
of cyclical Nature,
life attracts life,
as it marches along
the circumference of Time.

In the silence and chirping serenity,
mayhem quietly sings its own process,
keeping the balance
between heaven and hell, life and death,
delights and darkness.
No one escapes this colorful,
deafening silence
that permeates the chaos
with screaming orders.

In the garden
tension grows alongside
relaxed continuance.
Insurgents fight
for water and light.
Winds test the flexibility
of the establishment.
Battles are fought
as a way of life.
The battlefield vibrates
with struggle
but to the naked eye
its is dressed
in glowing terms
of peace.

A rose is a rose is a rose
and sometimes not a rose
especially when it arises
to the occasional mutation
embedded in a flourishing
mistaken identity.
In the adaptation
the colors shoot their pistils
into the air
causing a sweet ruckus,
which by any other name,
would be just as confusing.

Rocks are borderline structures
bound to enclose the wild potential.
Non-living gray seeds
living a hard life
among the buzzing perfumes
and bursting seams of
kinetic color.
Underneath these breathless creatures
life crawls and hides its brief lifespan.
Everything moves in the stillness
and still becomes…..
in the end, still becoming.

Life continues because
it does not.
This is noticed by the living
and it is beautiful.
Graceful and majestic palettes
paint a pretty picture
of this harmonious give and take.
In the end,
the garden is delighted to go dark
because then it can begin again…. 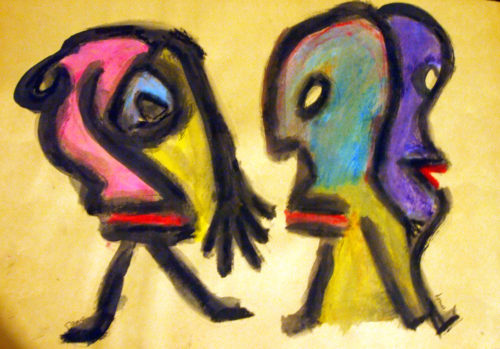 The tru story of eb and flo 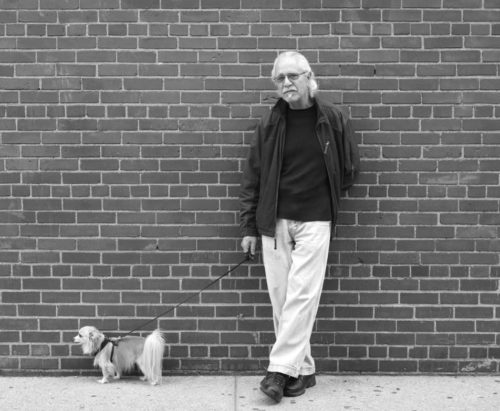 Phil Demise Smith was born in 1947 in Bronx, New York. He earned a BA degree in creative writing from Queens College (City University of New York) in 1970 and a Master of Fine Arts in poetry from Bowling Green State University in 1974. He studied poetry with William Packard, Howard McCord, Tom Raworth, Ray DiPalma, Anselm Hollo and Toby Olson. He’s had numerous books of poetry published including What I Don’t Know for Sure (Burning Deck), Periods, selected writings 1972-1987 (gegenschein) and most recently The History of Prediction with artist Gérard Sendrey. He began painting in 1987 in his own primitive expressionistic style that has its aesthetic roots (routes) in the works of the German Expressionists, Kandinsky, Dubuffet, the CoBrA group and Outsider/Art Brut artists. He has had numerous one person and group shows in the U.S. and Europe including a 2012 show at the Musée Création Franche in Bégles France. He is director of A Gallery @ Wares For Art and represents numerous outsider and self-taught artists from the U.S. and Europe. Since 1975 he has written and recorded over 200 songs with new wave bands NoYes, N.DoDo, Didus and the Fabulous Mascarenes, The Young Phogies, Art of the Middle Ages and anDna.