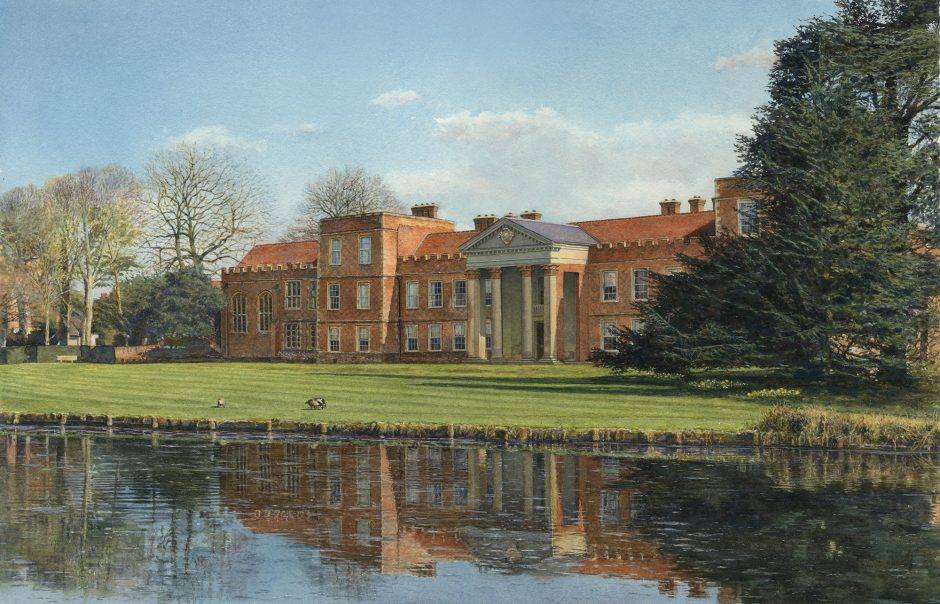 Artist’s Statement: My inspiration lies in the topographical drawings and watercolours of the 18th and 19th centuries.

My work is objective and realistic and true to the Italian term, veduta esatta meaning “exact view.”

My passion for and belief in the sketchbook as a means of understanding subject matter is central to the success of my watercolours.

The very nature of the sketchbook in its portability and mobility on location means it is innately suitable in this pursuit and as a precursor to more finished work: it is immediate and intimate and requires the minimum of materials.

The activity of drawing on location plays an integral part in my understanding and appreciation of the notion of place: placing oneself as the central reference point during location drawing.

This knowledge and experience also enables me to work from photographs alone when it is impossible for me to make a site visit.

In his book The Elements of Drawing John Ruskin talks about the importance of the process of drawing in education and William Morris said “everyone ought to be taught to draw…”.

My interests are concerned with the continuance and promotion of this ideal through my own practice as an artist/illustrator.

Peter Jarvis is an award winning artist and illustrator specialising in architectural subject matter for use in the publishing and building sectors. He has been creating fine art watercolours and commissioned illustrations for over 30 years. After graduating from art school in the early 70s with a diploma in Technical Illustration, he has worked as an illustrator and lecturer in the UK and Germany. He gained a Master of Philosophy (MPhil) post-graduate award from the Royal College of Art in Information Illustration in 1997 and has been practicing as a freelance architectural illustrator alongside teaching posts since 1984. He was awarded the prestigious Matt Bruce Memorial Award in 2014 at the annual exhibition of the Royal Institute of Painters in Water Colours (RI).

Peter runs occasional workshops in architectural drawing and watercolour rendering and has been commissioned by, amongst others, the Royal Academy of Arts in London. He is a Fellow of the Society of Architectural Illustration (SAI) for which he served two years as President. His watercolours have been exhibited and sold at the Royal Institute of Painters in Water Colours’ annual shows at the Mall Galleries and the Royal Watercolour Society (RWS) / Sunday Times Watercolour Competition at Bankside Gallery in London as well as venues throughout the UK. He has work in private and public collections in the UK and abroad including Gainsborough’s House in Sudbury Suffolk and Solent University in Southampton. Peter is a past joint-founder member of Urban Sketchers Southampton and an occasional tutor at Red Hot Press in Southampton. Peter’s book, Architectural Illustration, was commissioned by The Crowood Press and published in 2018.