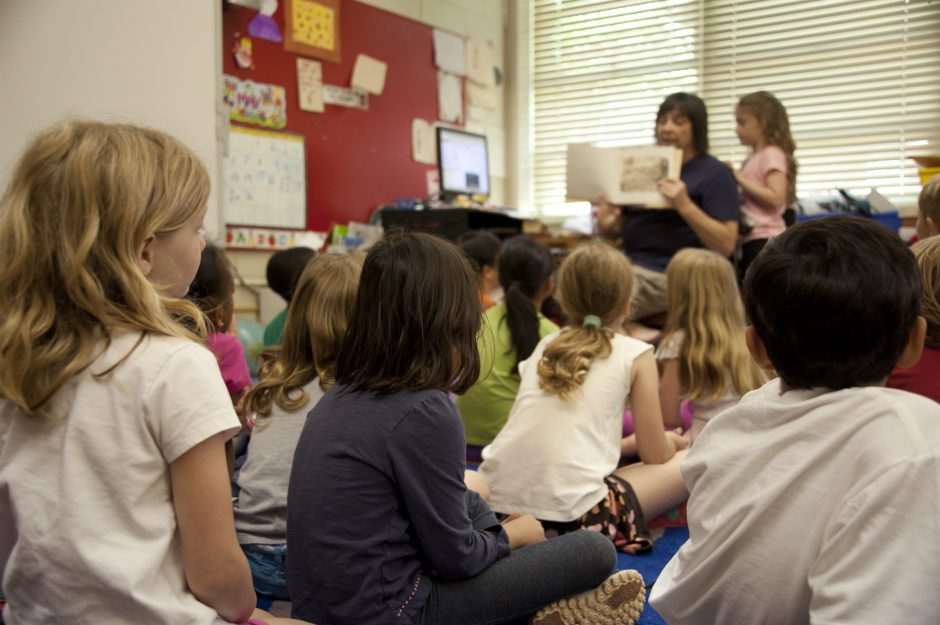 Nothing against Ms. Johnson, but when she read aloud to us, her head wobbled on her long neck. And she licked her thumb to turn pages. Nobody ever checked out a book she had read aloud during Library Hour.

The day she tried to read us The Mouse and the Motorcycle, her thumb had just smudged page one when Evan stood on a library stool and threw the recess kickball at her. It smacked her in the face. The chapter book dropped to the floor, its pages fanning out before us as Ms. Johnson let out a high “Oh!” of surprise. Then a smaller “Oh.” Of realization. She brought her knuckles to her nose. Nobody breathed. “Tissue,” she said through her hand, and brought her other hand to the blotch of pink swelling on her cheek. “Please.” The kickball, bumping across the carpet, tapped against the picture books lining a bottom shelf and dribbled to a stop. Then Evan wound up and toe-balled it across the room, his untied shoelace flopping.

I looked away, heat spreading from my tight chest to my ringing ears. Evan was my next-door neighbor.

“Can, someone, please, hand, me, a, tissue?” Ms. Johnson said through parted fingers.

My mom had given Evan a ride that morning.

“I can bring you toilet paper from the girls’ room?” someone said in a warbly voice.

Silence, then: “Yes. Rebecca. Thank you.”

“I’m sorry,” I heard Evan say. A fuzzy black border grew at the edges of my vision as I tried to focus on my double-knotted Keds. I clasped my clammy hands together in the lap of my dress, and the ringing became a buzz. “I’m sorry!” Evan yelled this time, his voice electronic, like it was coming through a computer speaker. The orange carpet became green; my legs, red; my heartbeat thumped in my neck.

“Are you breathing?” Evan’s skull asked in a robot’s voice. I heard a thud. I thought it was Ms. Johnson’s body that collapsed, but later was told it was mine.

A week later, Ms. Johnson squatted like a baseball catcher to meet Evan’s eyes when he returned from suspension. She held his arm gently and asked if she could sign his cast.

Evan’s father drove a gray van with two small windows on the rear doors, which swung outward. Inside it was crowded: buckets of wrenches, flat-head screwdrivers, pliers. Long nails. If asked, my parents would say he was a good neighbor. He collected our mail when we were out of town. No wife. Just him and Evan.

What I would say, if asked, is that you’d know him by the white spit that formed in the corners of his mouth and his yellowing teeth that were as even as one of the blades in his bucket.

What I wouldn’t say is that Evan and I had been riding bikes down the Pine Street hill that summer when Evan peeled off his shirt and draped it around his neck like a towel. I wanted to do it too. Wanted to feel the air breezing over my bare skin on our next run down. Once I was free of the elastic cap sleeves, I raised my arms while riding, like doing the wave at a baseball game. Giddiness filled me as though the roar of the wind were the roar of a crowd. On our last ride down, we sat at the bottom of the hill on the hot paved road. Evan used his shirt to blot his forehead and neck. I copied him, then said I’d get us root beers from my house, imagining how cool the cans would feel against our cheeks. I pushed my bike to the top of Pine Street hill and angled the handlebars toward the sprawling yards on the next block, the sun warming my shoulders, my swinging hair brushing my back. We’ll ride through the sprinklers next, I thought.

The gray van was parked in the driveway, and Evan’s father’s face was in the passenger-side mirror when I wheeled my bike past. “Hey,” he called to me. “Where’s your shirt?” Even though it was around my neck. “Put it on,” he told me. Even though I still looked like the boys in my class.

The shirt was harder going back on. The collar caught on my nose. The elastic cap sleeves pinched my arms. When I used both hands to unroll the fabric over my stomach, the bicycle’s front wheel twisted its neck, the handlebar jabbed me in the side, and the bike’s gears and pedal clawed my shin as the frame slid and crashed to the sidewalk. Newly tagged with a gash and a streak of grease, my body managed to drag away the bicycle but not to twist the shirt so the back wasn’t at the front, its label not at the hollow of my throat.

After that, whenever the gray van was in the driveway, I stayed inside and watched cartoons. Sometimes I didn’t even have to check. I could smell his pipe from our kitchen window.

Why wouldn’t I tell that story if, one day, someone rang our bell and asked, “Do you know the next-door neighbor?” Because telling that story about him would mean telling a story about me, and during it their eyes would change, like Evan’s had the night I told him, when we were catching fireflies in my backyard. This was near summer’s end, when darkness starts to fall right on the heels of dinner. With school about to begin and the glowing bugs between us, the story bubbled out of me, and once it did, the backyard, the block, the Pine Street hill all felt like mine again. The story on Evan’s face, though, was different. He let his firefly go. The firefly on the back of my hand lit and flew toward his. A laugh left his mouth, the last thing he’d say to me, and his eyes zeroed in on the path of the bug’s blinking yellow abdomen. With a quick swing of my Wiffle ball bat, he whapped the firefly, then left my yard.

Before Ms. Johnson tried to read us The Mouse and the Motorcycle, she’d taught us a new game. With the rain coming down outside, she pulled the recess kickball from the closet for an indoor activity. As a class, we filed down the stairwell to the library, which had a large carpeted area in the nook by the clock. Once we were all criscross-applesauce on the orange carpet, Ms. Johnson knelt beside me and explained the game to the class, the rubber smell of the kickball mixing with the coffee on her breath. We could roll the kickball or do an underhand toss, and we had to be calm, and deliberate, and say the person’s name before we sent the ball to them. We had to remain seated.

When we sent the ball across the circle, we had to announce a state name. Whoever caught the ball had to name that state’s capital.

Ms. Johnson sat on a stool and called out “Correct!” or “Try again!” as the ball rolled from one student to another, some flipping it quickly and others hugging it as they considered their options. “Um is not a name,” Ms. Johnson said, to keep the game moving. California, Hawaii, Idaho. Alex, Rebecca, and Vaughn. Soon I lost track of which states had been called, and the ball seemed to go to everyone but me. My worry that I’d say the wrong thing was replaced by the fear of not going at all. It was a blur through my tears who got it next until it landed in Evan’s hands. He froze on the capital of Michigan, and Ms. Johnson let him keep it for so long before he finally said “Lansing?” and sent it to me, “Delaware” so small maybe only I heard it, the arc of the kickball as it sailed from his corner by the clock to my lap forming the mirror image of the dip in Pine Street’s hill. I wrapped my arms around the ball and smiled.

Ms. Johnson was still looking over Evan’s head instead of at me. Then she rose from her stool, and as I moved my tongue behind my teeth to say Delaware’s capital, she announced that the game was over. Ms. Johnson pulled the kickball from my hands, her swollen, chapped fingers worse to see up close, and held it in front of her. “Time to pick out books,” she said.

The word rose in my throat and stuck to the roof of my mouth. I had memorized all the state capitals. I was a good student. I always did my homework. I raised my hand. It was my turn.

Ms. Johnson scolded me in front of the class, said she was shocked at my behavior, and ordered me to the cubbies in the back. Her tone was final.

But I said, “Dover,” then waited for what would come next.

Patricia Callahan is a writer and editor living in the Pacific Northwest. Her stories and poetry appear in Slice magazine, It All Changed in an Instant, and Six-Word Memoirs on Love and Heartbreak.
This is her first feature on The Fictional Café.