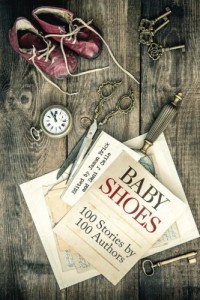 Some Fictional Cafe patrons already know about the Baby Shoes flash fiction anthology, a Kickstarted project I led that’s now up on Amazon for anybody who wants to buy it (hint, hint).

Last November, I launched the campaign based on a simple concept: 100 writers, 100 stories, less than 1,000 words each. We looked for enough funding to pay an editor, get a hot cover, and do an offset print run.

And it failed. We got nearly half the money we needed.

In December, I retooled with a trimmed budget and more support for contributing authors to bring in backers. We funded, and I promised delivery in April. Just today I sent out the last backer orders, which is another way of saying I delivered three months late.

Needless to say, there was stuff I didn’t know about writers and writing, editing and publishing. Here’s the most important lessons I learned from the experience.

1. Writers Will Be Writers

I’ve mentioned before that writers are not as a rule the most reliable people. Exceptions abound, but professionalism, quick response time and consistent communication are not our strong suits. Working 100 writers through the whole process was like herding cats who’d forgotten their Ritalin. Worth every groan of aggravation, but sometimes it was maddening. The real takeaway here is that if you can overcome this general tendency, editors will become your very bestest friends. It’s one of the most important habits of writing profitably.

2. Have Somebody Check Your Work

Seriously. Every time. Even if you’re on deadline. Even if you have to ask your mom. One extra set of eyes on your copy catches so many little mistakes (and big ones). This doesn’t go just for all the contributors. I skipped this step on most of my responsibilities, and the results could have been embarrassing if my co-editor hadn’t caught them.

These guys are a clearinghouse for design and graphics work, and specialize in making book covers happen. They were quick and professional, patient with the fact that I didn’t know how their interface worked, and really impressed me time and time again. If you need your cover designed, and don’t want to blow through a couple of grand, they will do you right.

4. Fiverr Is Also, If Not Equally, Awesome

If you want something done cheap and fast, Fiverr will hook you up with somebody who’ll do it for five bucks. Not as solid or professional as 99D, but if you need something and have no money for production, skip lunch one day and have a designer at Fiverr give you what they give.

We had a writer pull out at the list minute after reading the proof copy. Somebody else’s story had Bad People using Bad Words in it, and she objected so strongly she couldn’t be a part anymore. That’s fine. I respect people who stick by their guns. But then, she spent several emails and time on Facebook insulting me personally and she tried to torpedo the project on her blog. That’s assholish. Really, though, out of 100 people I only found one asshole. Good odds. The moral here is sometimes writers, editors, agents, bookstores, whatever will bring you an asshole. Wash your hands of them and stick by what you know is best for your project.

This was hard. And time consuming. And frustrating. But I loved the idea. I love fiction. I love writers. I had fun most of the time, but if I wasn’t having fun my lack of passion would have shown in the final product. Whatever you’re working on, work on what you love. Anything else — especially if you’re writing something you’re not excited about in an attempt to chase the market — just won’t do.

Pretty soon we’ll be moving on our first annual Fictional Cafe anthology. We’ll be applying these lessons and then some. Stay tuned to learn more about what’s sure to be an even wilder ride.