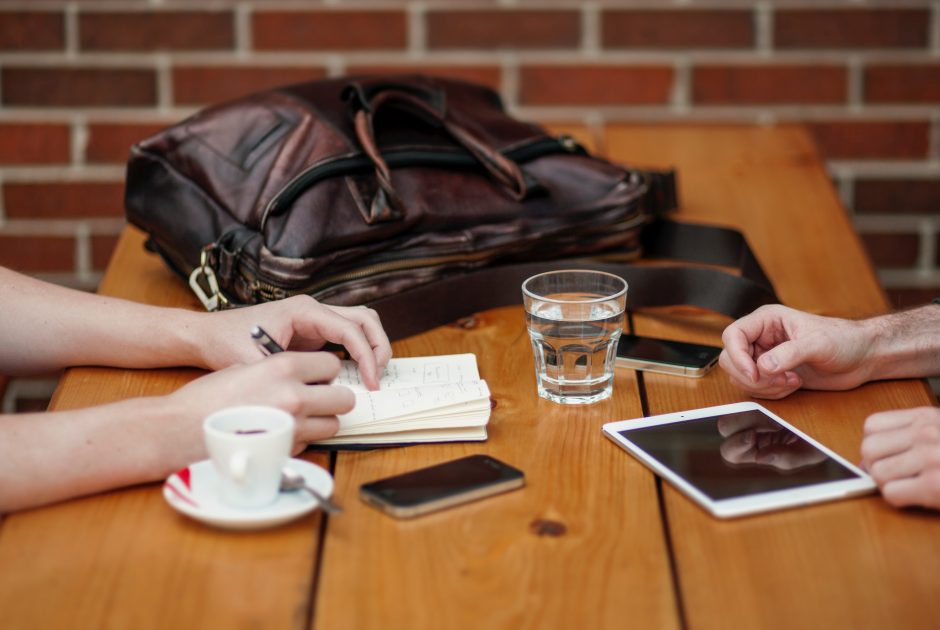 As he waited in line to order a cappuccino, Poston was surprised how crowded the Java Station was this late in the morning. Generally, it was less than half full at this time but, for whatever reason, every table was occupied. He couldn’t sit outside because it was still raining so he supposed he would have to share a table with another patron which was not something he liked to do.

“Do you mind if I join you?” he asked an older woman with spiky auburn hair that made it appear as if she were in a constant state of fear.

“Sorry?” she replied, looking up from the spiral writing tablet next to her espresso.

He pulled out the opposite chair. “It’s so crowded in here.”

Nodding, he sat down and looked away, not wanting to disturb her any more than he already had.

“I’m writing a letter,” she said, setting down her feathered schoolgirl pen.

She smiled back. “I know I haven’t written one in I don’t know how long.”

Carefully he took a sip of his drink, which was so hot it burned the roof of his mouth.

“I bet you’d never guess who I’m writing to.”

She shook her heart-shaped earrings.

“Someone you haven’t seen in a long time?”

“No, sir, I’m writing to a perfect stranger.”

He wrinkled his forehead in confusion.

“You see, I’m taking this social studies class at night,” she said, “and this week our instructor wants us to write a letter to a stranger.”

“About something unusual that we saw or did.”

“I don’t understand the purpose of the exercise.”

“I’m not sure I do, either,” she admitted, tapping a violet thumbnail against the side of her espresso cup, “but our instructor believes it will help us to connect with other people. You see, he intends to swap our letters with those written by the class he teaches during the day.”

He thought the assignment was ludicrous but didn’t want to discourage her so he kept his opinion to himself.

“You want to know what I’m writing about?”

“Sure,” he said, though he really didn’t.

“The night I was a chorus girl,” she chuckled. “I and some other girls in the office where I worked a hundred years ago were asked to perform a skit for the annual Founder’s Day party so someone, not me, came up with the idea of doing a Rockette routine.”

“That’s something unusual, all right.”

“My timing wasn’t that great but I could kick as high as anyone. Still can.”

Before he could answer, she got out of her chair and, as if she were back in that line, kicked her right leg straight above her head.

A few people in the crowded coffee house applauded, as did Poston, who was amazed at the flexibility of the older woman.

“I definitely believe you.”

Grinning, she returned to her chair. “You know, when I finish my letter, I could send a copy to you and, maybe, you could send a letter to me. I mean, we are strangers, aren’t we?”

“So we are but I’m afraid I wouldn’t know what to write. I haven’t lived a very eventful life.”

“Oh, I’m sure you’ve done or seen something worth writing about.”

“Right off hand, I really can’t think of anything.”

She slid a napkin beside his cup. “Well, I’m going to send you my letter so, please, write down where I can send it and I’ll give you my address in case you think of something.”

That afternoon, sitting at his desk in the real estate office where he was a licensed broker, Poston tried to think of something unusual he could write in a letter. It was hard, if not impossible, because as he told the woman at the Java Station, he hadn’t lived a very exciting life. Strange things happened to other people, not him. He hated to admit it but he was pretty dull and ordinary, content to watch the exploits of others in dramas on television.

Several more minutes passed before he recalled an incident last summer that prompted him to shudder a little. He’d stopped by a lakeside house a colleague was showing one afternoon and caught him in bed with another colleague. The stunned expressions on their faces were hilarious but he suspected the woman who asked him to write her a letter might not find it all that startling. She was so aggressive and flirtatious she might have engaged in something similar when she was younger so he dismissed the recollection as inconsequential.

He supposed he could make something up but that would violate the purpose of the exercise which was to introduce perfect strangers to one another. He may be a lot of things but he was not a fraud and would not pretend to be someone he wasn’t.

A few days later, Poston found in his mailbox the letter from the woman he had shared a table with at the Java Station. He recognized the return address on the envelope because she had given it to him when she invited him to write to her. “One lost soul to another,” she cracked. He didn’t open it but set it aside in a basket on top of the dresser in his bedroom. He couldn’t open it, he reckoned, not until he had written his letter.

Nearly a week passed before he realized he had nothing interesting to say, despite all the time he had spent trying to think of something. So, on a coffee-stained recipe card, he wrote, “Really, I am not anybody,” and sealed the card inside an envelope. Not having exchanged names with the woman, he then wrote, “Current Resident,” as she had addressed the envelope she sent to him.

T.R. Healy was born and raised in the Pacific Northwest, and a collection of his stories, A Time of Times, was published in spring 2019. This is his second feature on The Fictional Café. You can find his first here.