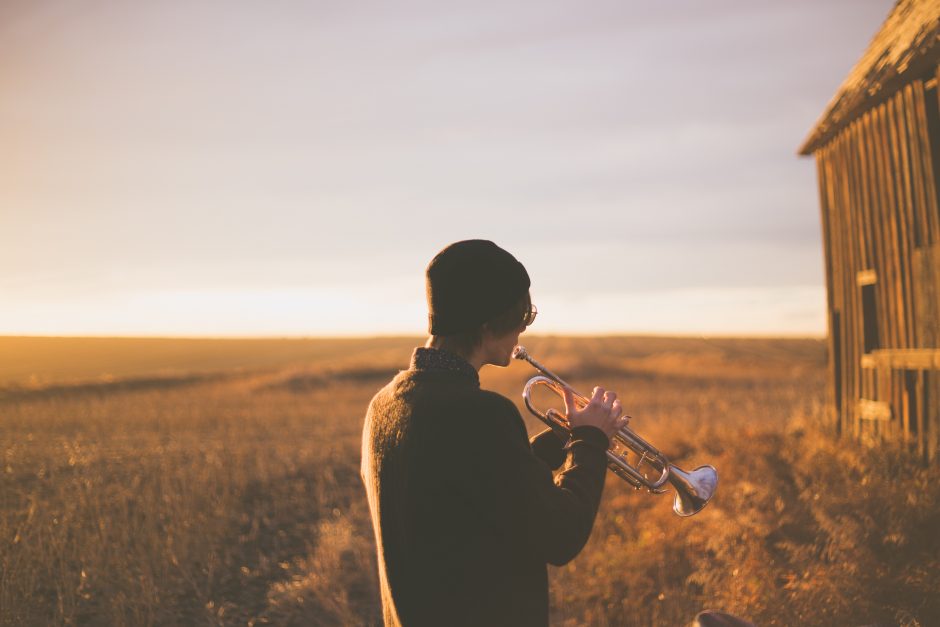 He would have said how the fuck could they make a trumpet out of plastic and have come forth out of it with such beautiful sounds. Sounds like he heard his father play on his brass trumpet. But Gabriel was only four years of age when he got it and didn’t know yet what plastic was.

Gabe would listen to his father play in the next room and play along with him from his room.

That duo would harmonize until mom started hitting dad and if Gabe was still playing after a few smacks at dad, she would go into his room and smack on him.

By that time dad would start playing his horn again and she would leave Gabe and go back to dad and start in again on him where she left off.

His horn sounds banished the bad ones.

Gabe figured he died because he wanted to.

Death couldn’t be worse than living with ma and dad’s horn could no longer quiet the bad sounds like Gabe’s was still doing.

After the funeral, Gabe took his father’s horn and then took a powder.

Gabe and his horn ran away together.

Gabe found work at a golf course as a caddy.

He always had his eye on the ball and now he was finding them.

He wrote his first piece around those times waiting to be called to carry golf bags in the caddy shack where he could just hold his forever horn in his lap and not play it.

He called it, “Please accept my love.”

It was a beautiful begging haunting yet friendly piece.

When he played it was as if he was born with a horn that would forever work and rest in his chest.

Mouthpiece pointing up to lip with the horn pointing down to his heart.

When he played, what was listened to, would stick to the ribs, and then some.

At day’s end he would pretend to be on his way to his “home” that he would describe to others as a nice big house surrounded by big trees that he shared with his “brothers and sisters” and it had a nice front and backyard that was as green as the golf course fairways he would carry and compose on.

He would leave a window unlocked in the caddy shack and hide in the woods until everyone left and through the window he would go to his “home” and sleep, eat, wash and stay there until early morn where he would slip back out the window and into the woods and wait until they opened and go back pretending he was just was showing up at work.

A lot of his wardrobe comprised of shirts and sweaters that were left forgotten on the fairways and such and end up in the caddy shack’s lost and found department.

He knew he was lost and hoped one day to be found.

When asked why he wasn’t in school, he said he was “home schooled.”

Well ain’t that the truth?

He played his song, “Please accept my love,” to one of the members of the club who noticed his forever with him horn, and when the music ended the club owner asked what it was called and who wrote it.

When he heard the title and the name of the composer, he teared up and threw down a twenty to Gabe.

Then he asked Gabe a lot of questions.

It did not take him long to unfold the folded-up truths regarding this young man’s circumstances.

He said, “You three are coming home with me tonight.”

When Gabe asked who the other two were, he was told, “Your horn and my sweater.”

Alan Berger has two films on Netflix, etc, that he wrote and directed and has over 50 short fiction stories and poems published since 2018. He lives in West Hollywood. This is his first feature on The Fictional Café.