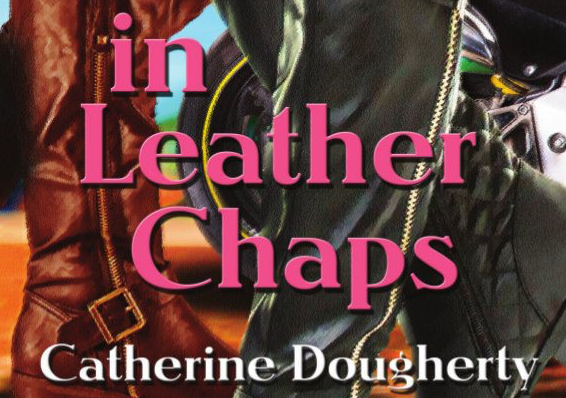 Editor’s Note: Last year, we published an excerpt from Catherine Dougherty’s first novel, in Polyester Pajamas. Since then, she has been nothing but prolific, publishing the follow-up in Woolen Bikinis and now the third Jean and Rosie novel, in Leather Chaps, from which we feature an excerpt.

For the next two days, August 26 – 28, Cathy is offering her first novel, in Polyester Pajamas, Kindle edition, to readers absolutely free! Here’s a great way to get into the Jean and Rosie series without spending a dime. If you like the first then you’ll probably like the second and be eager to pick up the third, in Leather Chaps, causing both author and readers to rejoice!

When Life Gets Tough, Women Get Tougher . . . Jean can handle the upcoming divorce, the constant hot flashes, the unemployed son, even the boredom of working in retail. What she can’t handle is what’s been happening to her business partner and best friend, Rosie. Life has been tough on Rosie these past few months. Although trying to remain cheerful (as she always is), she’s not doing so well and is feeling blue. And both Jean and Rosie are concerned about Mary. Mary has had a tough life so far. Now working at Simple Pleasures, and having her own apartment, she’s finally optimistic about her future. That is, until her mom shows up unexpectedly on her doorstep with problems of her own. “All of this bad news has to stop!” Jean declares. She needs to find a way to make both Rosie’s and Mary’s lives a little brighter, but she doesn’t know yet what to do. Until she discovers Rosie has a secret wish, and Mary has one, too. That’s when Jean concocts a crazy plan to make both their wishes into unforgettable dreams come true. 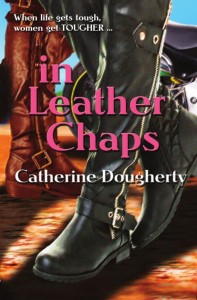 (This excerpt is from Chapter 7)

Now I know why I don’t like dating; what a disaster! Morgan, her husband John, and Jake, Morgan’s brother/my blind date, met me at the diner across from the shop right after I left work. When I first caught sight of Jake, I was impressed. Morgan was right, he was gorgeous, too gorgeous for plain little ole me.

“Jake, I’d like you to meet Mary,” Morgan said.

I could immediately see by the look on his face that he was disappointed. Bummer! I mean, he was really hot and those muscles of his—WOW! Of course, once he opened his mouth, I knew his good looks made up for his brain. He was dumber than a doorknob. Figures. Now why would Morgan even think I’d be interested in someone like that, even if it was her brother?

I tried to be nice, I really did. I smiled at him, attempted to converse, and we all had dinner before going out to a local nightclub. Jake and I danced together a few times, even a few slow songs, and despite how obvious it was that he didn’t find me attractive, he did try to hit on me. It was right in the middle of a slow song. We were kind of close together, I mean, we had to be. The dance floor was beyond crowded and it was a slow song. It would’ve looked pretty stupid if I kept arm’s-length away from him. Besides, his muscles were enticing. I wanted to feel what it was like to be wrapped in his arms. I guess I kind of gave him the impression I wanted to get a bit friendly because all of a sudden, right in the middle of the song, he put his big powerful hand on my butt and pushed my body closer to him while giving me a squeeze. I could tell right away that, although I wasn’t apparently his type, he was still going to try to have his way with me.

Immediately, I put both my arms up to his big broad chest and pushed against him with all of my might. Not the reaction he expected. He fell backwards and tripped over someone else. Before I knew it, he was flat out on the floor and people around us were finding the scene rather amusing. I tried not to, but I started laughing. This didn’t make him happy, not at all.

I felt bad because Morgan and her husband were also on the dance floor and saw what happened, although by the smiles on their faces, they weren’t upset at me. I knew any chance of having a good time tonight was over, though. Jake got up quickly from the floor, gave me a dirty look and did what no man should ever do to a woman they’ve tried to hit on, especially in the midst of a crowded dance floor. He pushed me back.

I saw it coming and braced myself for it. Another guy came up from behind and grabbed onto me to keep me from falling. He held tight and I can remember a tingle shooting through my body the moment he touched me.

Who was this guy?

He told Jake to leave me alone. Jake threw up his hands in defeat, said a few cuss words and walked away.

I went over to Morgan and her husband who were still standing nearby. I apologized, and said I’d find my own way home. Morgan tried to insist they’d take me home if that’s where I wanted to be, but maybe I should stay and dance with some other guys. She said Jake would get over it and be okay. She was right. I turned to look around, trying to find “my hero” of the night, the one who rescued me from Jake, but he was nowhere to be found. Jake, however, was back on the dance floor, already snuggled up and dancing with another woman who was stacked and looked twice his age. His big muscular hand was firmly placed on her butt and she wasn’t protesting.

“Jake looks like he’ll be fine. He’s found someone more his type,” I said. I thanked Morgan for trying, said I’d see her at the shop, and, really, it was okay, I’d find a ride home.

I walked into the restroom afterwards because it was quieter in there, took my cell phone out of my pocketbook and called Jack.

“Please don’t tell Rosie what happened. I’m so damn embarrassed, but could you come get me and drive me home? I’m about two miles away and I can walk….” I didn’t have a chance to finish before Jack cut in.

“No, you’re not going to walk on your own, not even in this small town. And don’t worry, Rosie’s out right now at a meeting, so stay right there, I’ll be there soon.”

See, I told you, Jack’s a nice guy. I wish he was my biological father, instead of that crazy, psycho, drug smuggling . . . 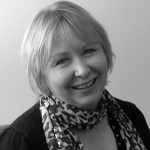 Catherine Dougherty, a New Hampshire native, is a fiction author and a former newspaper reporter, columnist, photographer, and Real Estate/Business Broker. in Polyester Pajamas won the New Hampshire Writers’ Project 2013/2014 Readers’ Choice Award for outstanding work of fiction. Cathy was a featured author in the 2012-2013 publication 50 Great Writers You Should Be Reading presented by TheAuthorsShow.com. Visit her website; perhaps you’ll learn what Jean and Rosie will be wearing in the next installment!