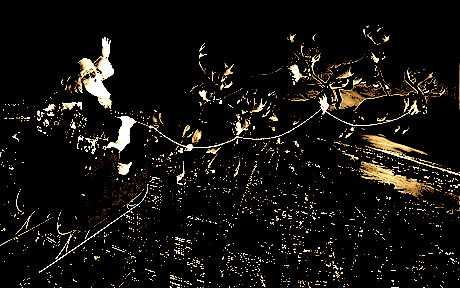 Your baristas, Caitlin, Jack, Jason and Mike, would like to wish you, the members of our Fictional Café Coffee Club, a Happy Holidays season. Hey, even if you’re reading this but not yet a member, we still wish you the best of the season. [Maybe it’s time for you to join us?]

In any event, here’s a very short but very charming story from our friend and contributor, Lloyd R. Prentice, author of The Gospel of Ashes, a thriller we excerpted here at the FC last month [“titled “Carmichael“], Freein’ Pancho, and the three-volume manga Aya Takeo. Catch up with Lloyd and his books at his Amazon site.

When Santa on his yearly round narrowly dodged a shoulder-fired missile, he proclaimed, “Enough is enough!”

This went far beyond marking up walls with purple Crayon or deliberately pouring pea soup on the floor.

This was light years beyond lump of coal territory. This was–

“This–this–” he didn’t even have words to describe it. He pulled sharply on the reins and hung a U-ie.

“Santa!” Rudolph proclaimed. “This is not the way! Have you lost your bearings?”

“Savages!” Santa hissed. “I could see this coming. Been keeping a sharp eye from Santa Central–Yes, seeing more naughty than nice, bearing witness–can’t tell one side from the other in their depths of insanity and savagery. They don’t deserve me. I’m going home, climb under covers–let them worry about toys for girls and boys.”

“You’re the spirit of the season. You’re the symbol of hope, joy, and generosity.”

“Don’t care. Don’t care. They can’t find it in their hearts to love one another. Strapping bombs on babies. Bombing wedding parties. Gunning down cartoonists. Blasting homes to smithereens. Look at them down there turning the homeless and hungry away from safe haven. Pox on the lot!”

Rudolph had never seen Santa, always so cheerful and jolly, in the grip of such anger and despair. What to do? What to do?

Rudolph skidded to a halt. Dug in his hooves, caused a reindeer pile up. Santa’s sleigh skidded this way and that, nearly overturned which, at an altitude of 21,259 feet, would have been sheer disaster.

“Rudolph! What in blazes?”

“Santa–they need you now more than ever. Some, maybe many, have lost their way, yes. But far more, though they vacillate between hope and fear, reach out with love to strangers, strive to do right despite fire storms of violence and oppressive injustice.”

“Not another step until you see it in your heart to turn around.”

Santa grumbled. Santa squirmed. Santa  fidgeted with the tip of his long white beard. At long last he sighed–

“Rudolph, my friend–you’re right. They DO need me now more than ever. So, up up and away–

And with that, millions of children never learned how close they came to a Christmas without toys from Santa.

May you and all you know and love find the coming year filled with hope, joy, and generosity.

Happy Holidays from Lloyd and your Fictional Cafe Baristas