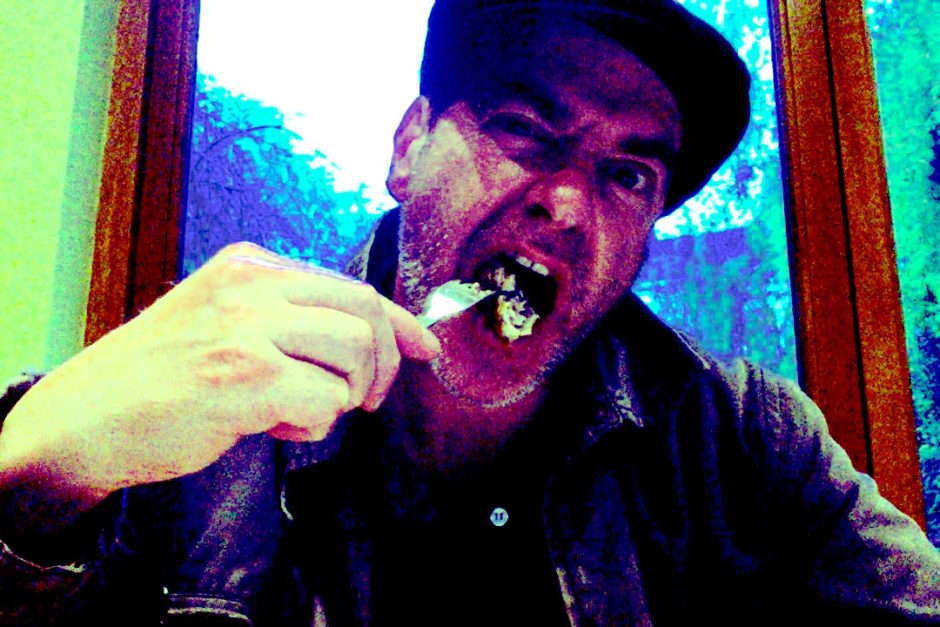 Editor’s Note: Our first Featured Short Story for November features a narrator whose cockney British accent and spellings may sound a bit off (think Brad Pitt in Snatch), but rest assured, it’s all part of Mr. Craven’s master plan.

Disaster of the Will

A filmy substance welds shut my eyes. I free an arm from the embrace of the twisted mildewed blankets that I have grown to know and hate, prise apart my eyelids, accustom vile jellies to gloaming. The evidence of my desuetude: mounds of unlaundry, overflowing ashtrays. Crushed cans of Horst Wessell Marching lager littering the pitifully cramped floorspace. Once again I have slept in my clothes.

I peel a corner of the orange curtain and peer outside. The mountainside, muddy, denuded of grass by ramblers’ boots. Valium sky. Evidently later than I thought. Maybe midday. Nobody about. Surprising. Usually the shitheads are hammering on the manager’s door round now so they can whinge about the shocking toilets. Usually, the deserving poor loitering by the standpipes in their cagoules and shorts and flipflops, moaning about thieving gyppos and unions and gyro non-arrivals.

I trudge in flipflops to the shower block. That familiar and despised slapping sound on the cement path. Damp towel, amorphously plasticised soap. I wear shorts and a cagoule. Stiff breeze. Sewage stink from the treatment plant up on the headland. I pass trailers, the gravelpit, the manager’s office, caravans. The wind whips up sweet-wrappers, tabloid pages, burger boxes. Still noone. Rumours of a kiddy-fiddler wintering on a site below in the dunes. Probably all down there now, shouting ‘scum scum scum’ at some pensioner whose face fits. Breaking his windows.

Afternoon. The laundry block, the manager’s office, the bar, all shut. Disappointing, I need the payphone, I need to call O’Boyle, to see if my new i.d.’s come through.

Noone in the playground.

The shop. Doors agape, swinging in sudden gusts coming off the ocean. Inside it’s bereft. A scarcity of basic commodities. I help myself to white slicebread, marge, Horst Wessell Marching lager. Reimported tobacco. Rizlas. I look through the smudged window at the breakers rolling in, at the dim grey hulks of the oil tankers sitting at anchor on the horizon.

Dusk. Where is everyone? Even if O’Boyle tried to call me today, even if he hasn’t legged it with my seed-money, noone’s been in the manager’s office, there won’t be a message.

Night. No lights in other caravans. They all went to bed early. Or they’re dead. I switch off my light. Very dark, complete cloud cover, a squall blowing in off the ocean. I drink vermouth, smoke skunkweed, listen to the raindrops spunking all over my caravan. The distant roar of the surf.

Morning. I awake grudgingly. Light seeping through my eyelids. It’s late. Midday perhaps. Slept in my clothes. Someone whistling dementedly right outside. Well things are back to normal evidently. I sit up, peel the corner of my orange curtain. Silly old bugger. Just about to wave laconically, yes I know yes go on yes fuck off. Quite suddenly I freeze, my mind realising a split second after my brainstem that he is, but for his black lace-ups and beige socks, naked. Standing there, pipe wedged between liver lips, arms folded over drooping gut, gazing down at the benzine rainbows quivering sluggishly in the gravelpit: nude.

I crouch on the floor. Amusing, almost. The shitheads and deserving poor really went off to the other site in the dunes to engage in vacational scapegoating. And nudists filled the vacuum. Maybe it’s worse. Nudist anthrobots have taken over the world. Me the last survivor, hiding in my caravan. Or the universe has ceased to exist outside the site. You walk in any direction, never reach the site perimeter. Always end up back at your caravan.

I stay inside all day, stoned, unable to venture out. What could we possibly say to eachother?

Dusk. I have plenty of skunkweed. Supplies of slicebread are running low. I unearth from the cupboard a tub of Unfuckingbelieveable, smear it on slicebread, chew. Drink Horst Wessell Marching lager, smoke skunkweed.

Night. Blackout, existence in darkness, an earwig in a bumcleft. Very stoned. Unfuckingbelievable. Paranoid. The nudists know everything. I’ll awake tomorrow, and they’ll have surrounded my caravan. It’ll be von Paulus’s last morning in Stalingrad. Or a whicker man scenario. I peel the corner of my orange curtain. Lights are on in the other caravans.

Morning. Final slices of slicebread with Unfuckingbelievable. Still an abundance of Horst Wessell Marching lager and skunkweed. I can brazen today out getting even weirder. Later, under cover of darkness, I’ll break into the shop.

The nudists are not aesthetically pleasing. The site assumes the appearance of an Anti-Eden. Ulcerating scars piercings depilations porcine guts. Haemotomas on parade.

Late morning. Rain rattles on my roof. Cannabis, hypoglaecemia, solitude. Gathering hysteria. Nudists chainsaw planks. I peel back my orange curtain. Through a thicket of trailer homes and squat beige caravans, I discern the wooden stockade now assuming form on the site perimeter.

Deafening noise. It goes through my head, penetrates my inner core.

A conversation just outside my caravan. The digging of latrines. The benefits or otherwise of circumcision. No firm conclusions reached.

Later. The stockade is up, the latrines dug. Peace. I ingest skunkweed and Horst Wessell Marching lager.

Someone raps at my caravan door. I jump out of my skin.

First words I’ve spoken since the normal people disappeared. My heart is in my mouth. They mustn’t see. A brainwave. I peel off my t-shirt, open the door ajar, bend round it grinning insanely. Wizened brute, wingco m’stache

-Might I ask whether you’ll consider voting for me in the ballot?

-Well you should, he continues, it’s me or that swine Schtettlebaum.

-Beastly little man, says the naked old rolypoly I take to be his lady wife.

I find myself nodding manically.

-So if you’ll just, yes? says the wingco, most obliged…

They arseface and march off in search of more lobbyfodder.

Latrine ditches scar the mountainside. Nudists trudge hither and thither. Flipflop slap on concrete path. Volleyball, inevitably. One day I’ll make a film about this. I’ll call it ‘Disaster of the Will’.

Nudists shelter under my eaves, their conversation muffled by the rain clattering on my roof.

-Course you know another thing about roundheads, I hear one of them say, they’re all Islams an’ Jewboys.

-Unholy alliance, says his interlocutor, we all know which way that’s headed. They’ll be wanting our women next.

-Thin end o’the wedge reverend, says the first speaker, it’s why Wingco Starboard has to get on the sanitation committee, now how’s about coming back to mine for some good Christian pork sausage.

The plotters trudge off through the puddles in their flipflops.

More hard rain. I peel my orange curtain. Raingobs bounce off the cement path. The slap-slap of flipflops. Two more plotters arrive under my eves.

-We have to defend ourselves Danny, says one of them.

-Don’t forget, says Danny, I’m the vice-chair of the fixed assets (gardening & carpentarial implements) subcommittee. Chainsaws and pick-axes are within my gift.

-They outnumber us seven or eight to one.

-There’s always been a streak of it, says Danny, you knew that when you joined.

-Hold on, says the first speaker, here they come.

I drink. I invent a new cocktail. Vermouth and Horst Wessell Marching lager. I give it a name. Horst Wessell Marching Lager And Vermouth. Hits the spot. I smoke skunkweed. I consider. There’ll be a guard on the gates. O’Boyle’s never going to come through with my new i.d. I’ll die of malnutrition, in this dirty caravan, in the middle of an intra-nudist pogrom.

On the other hand, Wingco Starboard didn’t seem to register my presence fully when he dropped by. I could risk it. If I walked amongst them, as one of their own…The very thought’s anathema. There would only be bread and marge in the shop. No message from O’Boyle in the manager’s office. An embarassment stiffy would be my undoing.

Dusk. Fighting. Under the mountain’s long shadow it’s already dark. Presumably the cavaliers attacking the sons of the circumcised. Alarum and the screams of the dying. The thud of some wretch in a freshly dug and freshly used latrine.

Then a popping sound and a tremendous explosion. The caravan rocks. The pile of dirty dishes crashes to the floor. I open the door and look out. The top of the hill has been flattened. Slack-jawed nudists stand agape.

-Some prat with a grenade launcher, says Danny, took out the fuel dump.

-Oh shut up Schtettlbaum, says Starboard, everyone’s had quite enough of your Jewboy balderdash.

-A fuel dump? I boggle, On the mountainside?

Nudist eyes swivel towards me.

-Why, says Starboard his moustaches bristling, are you wearing clothes?

I jut my chin.

-I was here first.

-What the devil d’yer mean by that?

-On this campsite. I was here first.

-Balderdash, says Starboard, nobody was here before us.

-He was, says Schtettlbaum, he’s an Aboriginal.

The earth seems to shift slightly underneath us. Nudists stagger. Very slowly, the side sheers from the mountain. Suddenly, from very high up a wall of mud is gathering momentum.

I jog down concrete paths. Past caravans, trailers, gravelpit shop manager’s office. The mercifully unmanned checkpoint at the exit. The rest of the world does exist. Earth rumbling. Behind me a slagheap. If I turn and look I’ll probably be changed into a pillar of kak.

O’Boyle never came through with my new i.d. Understandable, really. I bought a tent and a secondhand bike, and moved from site to site selling my remaining skunkweed. I scanned the news for a while. No mention whatsoever of a mudslide burying alive hundreds of nudists. Eventually, I understood everything.

Late afternoon. A day spent hawking smack round the campsite next to the sewage treatment plant. I feel compelled to take a look.

I cycle down narrow lanes. Gaunt hedgerows. Twigs apoke, dogshit sky, the breakers battering the rocks. The slagheap has, I notice, regained its former height. Rain. I round the last bend expecting to see exhortations crowning the checkpoint, dormitory huts, a rubber factory, chimneys, a camp orchestra.

Mercifully, none of these things. Nor any message from O’Boyle in the manager’s office. The shop. I buy slicebread, vermouth, Horst Wessell Marching lager. Unfuckingbelievable. Trudge past trailers, caravans, the gravel pit. Rain. Whingers and the deserving poor loiter in shorts and cagoules, droning about workshy union gyppos. My caravan is as I left it, except someone has thoughtfully replaced all my shattered crockery with equally dirty but unshattered crockery. I smoke skunkweed, drink Horst Wessell Marching lager, vermouth. Horst Wessell Marching Lager And Vermouth. Cram slicebread and Unfuckingbelievable into my unresisting maw, and wait for O’Boyle.

Richard Craven was born in Toronto, Ontario, migrated to the U.K. as a child, has lived in London, Hampshire, the West Country, and for a short while in Paris, and now lives in Bristol, England with his adult daughter and son. He speaks French, has a PhD in Philosophy, and is the author of the novel Bile (1999, written as Mark Brand), Amoeba Dick (2014), and Pretty Poli (2015), and a play, The Senseless Counterfeit (2015). He is presently working on a 155 sonnet sequence, a collection of short stories, and a further novel, Odour Issues.